Since antiquity, intelligence has often been pivotal in the success or failure of conflict. Preventing surprise and providing an overview of the adversary’s armed forces have been key factors in military and political decisionmaking. During the Cold War, defence intelligence was vital to stability, and today it is again sadly relevant following the Russian invasion of the Ukraine. 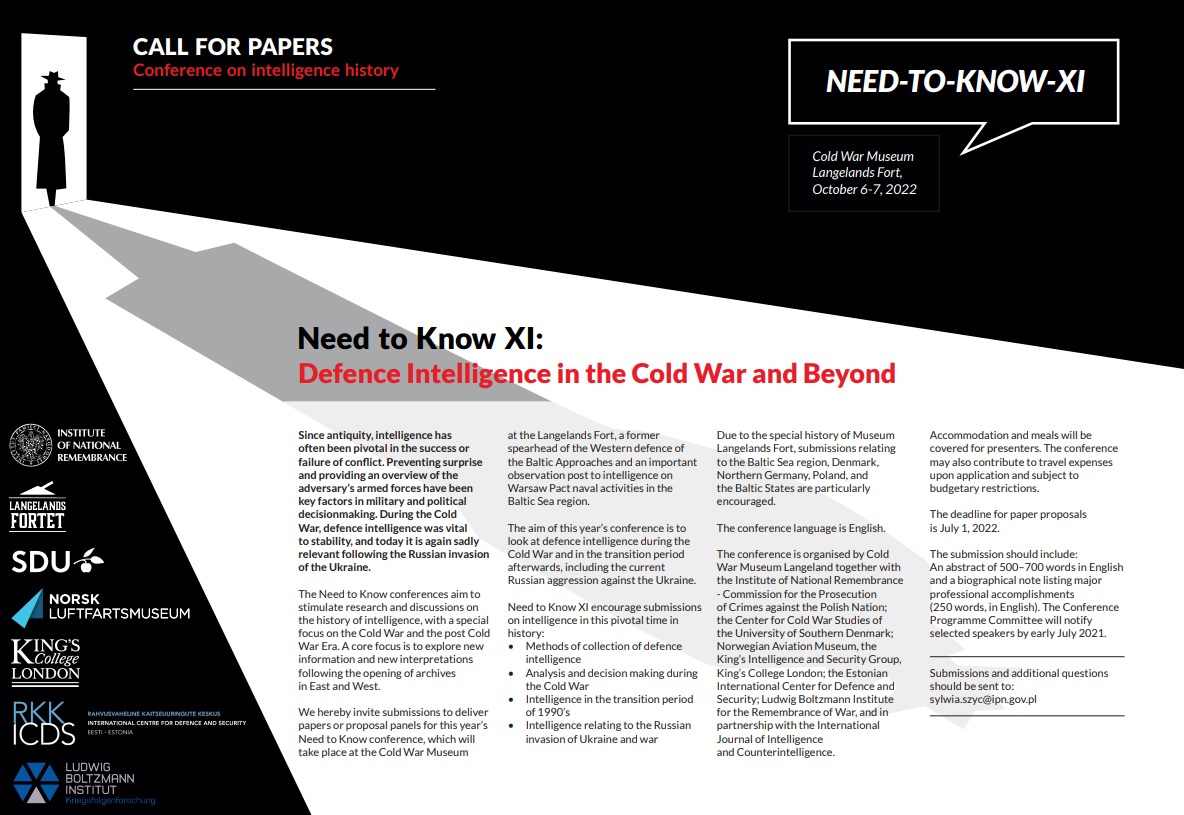 CALL FOR PAPERS: International Conference Need to Know XI: Defence Intelligence in the Cold War and Beyond Cold War Museum Langelands Fort (Denmark), October 6-7, 2022
The Need to Know conferences aim to stimulate research and discussions on the history of intelligence, with a special focus on the Cold War and the post Cold War Era. A core focus is to explore new information and new interpretations following the opening of archives in East and West.
We hereby invite submissions to deliver papers or proposal panels for this year’s
Need to Know conference, which will take place at the Cold War Museum at the Langelands Fort, a former spearhead of the Western defence of the Baltic Approaches and an important observation post to intelligence on Warsaw Pact naval activities in the Baltic Sea region.
The aim of this year’s conference is to look at defence intelligence during the Cold War and in the transition period afterwards, including the current Russian aggression against the Ukraine.
Need to Know XI encourage submissions on intelligence in this pivotal time in history:
- Methods of collection of defence intelligence
- Analysis and decision making during the Cold War
- Intelligence in the transition period of 1990’s
- Intelligence relating to the Russian invasion of Ukraine and war
Due to the special history of Museum Langelands Fort, submissions relating to the Baltic Sea region, Denmark, Northern Germany, Poland, and the Baltic States are particularly encouraged.
The conference language is English.
The conference is organised by Cold War Museum Langeland together with the Institute of National Remembrance - Commission for the Prosecution of Crimes against the Polish Nation; the Center for Cold War Studies of the University of Southern Denmark; Norwegian Aviation Museum, the King’s Intelligence and Security Group, King’s College London; the Estonian International Center for Defence and Security; Ludwig Boltzmann Institute for the Remembrance of War, and in partnership with the International Journal of Intelligence and Counterintelligence.
Accommodation and meals will be covered for presenters. The conference may also contribute to travel expenses upon application and subject to budgetary restrictions.
November 20210
The deadline for paper proposals is July 1, 2022.
The submission should include: An abstract of 500–700 words in English and a biographical note listing major professional accomplishments (250 words, in English). The Conference Programme Committee will notify selected speakers by early July 2021.
Submissions and additional questions should be sent to:
sylwia.szyc@ipn.gov.pl