The Supreme Court in Moscow has ordered the liquidation of Memorial. The oldest organisation documenting the crimes of the Soviet Union has long cooperated with the Polish Institute of National Remembrance 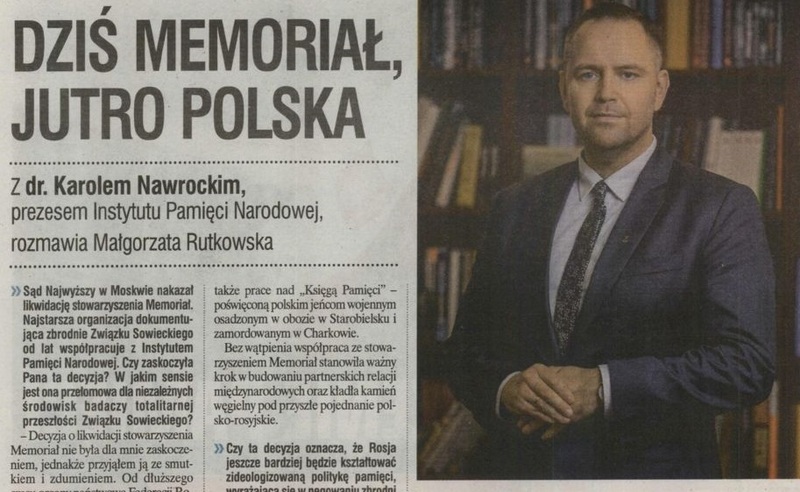 Has the decision surprised you? In what sense is it a game changer for the realm of independent researchers on the totalitarian past of the Soviet Union?

The decision to liquidate Memorial came as no surprise, yet it made me sad and astonished. For a long time now the state institutions of the Russian Federation have repeatedly imposed financial penalties on the organisation and undertaken a range of actions aimed at discrediting its members. Its liquidation was only a question of time. Alas, the ruling of the Supreme Court in Moscow confirmed that there is no space for independent historical research in Putin’s Russia. The loss is the harsher for the research world in that Memorial consisted primarily of Russian historians. It cannot be excluded that, after this ruling, researchers investigating communist crimes will find it even harder to access archives and other materials while any work failing to toe the line of the Kremlin’s current policies on history will be impossible.

What services has Memorial rendered to Polish study and remembrance and to building an image of “a different Russia”?

Thanks to Memorial, Poles gained access to many documents stored in the archives of the former USSR which had previously been inaccessible, so that they could learn the fates of their nearest and dearest – the victims of soviet repressions. The joint Polish–Russian work, for example, resulted in the creation of the Index of the Repressed with a named documentation of the lives of Polish citizens persecuted by the organs of the soviet state in 1939–56. Moreover, the research on the history of the victims of the Katyn atrocity deserve special recognition. Its fruit are the three volumes of Killed in Kalinin, buried in Mednoye. A book of remembrance of Polish prisoners of war - prisoners of the NKVD USSR Ostashkov camp, shot dead by decision of the Political Bureau of the Central Committee of the Communist Party of the Soviet Union of 5 March 1940, published by Memorial in 2019. It is also worth mentioning that last year the Institute continued working with Memorial on the “Book of Remembrance” devoted to the Polish prisoners of war incarcerated in the Starobilsk lager and murdered in Kharkiv. The cooperation with Memorial was certainly an important step in building international partnership relations and provided the cornerstone for future Polish–Russian reconciliation.

Does this decision mean that Russia will develop an even more ideology-driven policy of remembrance, expressed in the denial of communist crimes and approval for the apparatus of repression?

The martyrology of the Great Patriotic War (1941–45) and the sacred, messianic myth of Victory (always capitalised) over Nazi Germany in 1945 is the core of the Russian state ideology and mythology. It is the only national myth truly uniting Russians, and the one most frequently used by the authorities. Any attempt at its denial, as well as comparison of the criminal actions of the USSR with those of the Third Reich, elicits stark condemnation from the Kremlin. Unfortunately the Russian authorities tenaciously eliminate the pluralism of information and research from the public arena, which is a threat to any historical dialogue. Should we observe that process passively, the international arena will soon be dominated by the demagogic narrative of Sergei Lavrov with the Red Army allegedly saving democracy in the West and Vladimir Putin’s calumnies making Poland responsible for the outbreak of the Second World War and the Holocaust.

Russia has not yet shared the entire documentation on the Russian investigation into the murder. In your opinion, how likely is it that the missing materials will be obtained?

The possibility of continuing the investigation concerning the Katyn murder depends on the political climate in the Kremlin, which currently does not allow the presentation of the historical truth about the murder of Polish prisoners of war. The soviet crime threatens the narrative approved and disseminated by the Russia authorities as it breaks apart the beautiful myth of the USSR. For that reason, the Russian Federation blocks access to source materials and shows neither goodwill nor eagerness to start any international dialogue. I believe a change of their approach in the future is highly doubtful as I consider that such an investigation strikes at the Victory-centred historical policy of the Kremlin.

Justifying its verdict, the court in Moscow upheld the charge of the prosecution accusing Memorial of “falsifying historical memory”, notably the memory of the so-called Great Patriotic War. Why are the Russian authorities so keen on maintaining a falsified picture of the Second World War?

The activity of Memorial touched upon the subject of the injustice of the totalitarian system in the USSR and reclaimed the memory of the victims of the Stalinist repressions. Vladimir Putin wants to build the state identity of contemporary Russia on the victory of the USSR over Nazi Germany in 1945, glossing over the communist crimes. There is a saying that “history is written by the victors” and the so-called myth of the Great Patriotic War is supposed to tally well with contemporary Russian historical narrative. For that reason, glossing over and manipulation of many facts from the Second World War cannot be surprising from the Russian perspective, for example the raping and looting of civilians by the Red Army.

Is the historical propaganda of Russia changing or continuing the fundamental tenets developed during the Second World War?

No powerful tradition of reliable and independent academic reflection on the past that could provide a realistic contemporary counterpart to the official propaganda has developed in Russia. On the contrary, the opinion that the Germans are responsible for murdering the Polish officers in Katyn and that the Red Army liberated Western Belarus and Ukraine from the authoritarian, ultra-rightist terror by capturing the eastern territories of the Second Republic of Poland becomes increasingly vocal in the public space. Unfortunately, with each succeeding year we will witness intensifying aggression in Russia’s rhetoric. In turn, the Kremlin will undertake actions designed to discredit those states that try to challenge the Russian narrative in the international arena. In this case, the worst blows will come to Poland which is already under attack from Putin, who publicly states “it was no coincidence” that the German death camps were situated on the territory of our country. Another such example is the lampoon he perpetrated in the American magazine The National Interest in 2020, blaming Poland for the outbreak of the Second World War. Explored with similar intensity is the subject of an alleged secret Piłsudski–Hitler pact with an aggressive anti-soviet purpose. This is a blatant historical lie. Moreover, the view that the soviet armies allegedly brought liberation to Europe in 1944–45 is popular in Russia to this day, while the previously mentioned crimes perpetrated by the Red Army on the civilian people are dismissed.

In the statement you issued after the decision of the Russian court, you appeal for Memorial to be defended. What forms of such assistance are realistic? How will the Institute continue cooperation with Memorial. Are any joint projects being conducted?

Certainly, the members and management of Memorial can count on the Institute’s support. Neither do we exclude diplomatic action taken through international organisations and representations.

This year the Institute will inaugurate a new project Szlaki Nadziei. Odyseja Wolności / Trails of Hope. Odyssey of Freedom, which is to be launched on the 80th anniversary of General Władysław Anders leaving the Soviet Union. The Kremlin can be expected to use that opportunity to launch another campaign against Poland, for example by reviving the claim of the “treason” of the government of the Republic of Poland and the “liberatory mission of the Red Army”. Is the Institute ready to repel the propagandist action of the Kremlin?

It is highly likely that the Kremlin will decide to use our project for its historical propaganda. As the Institute of National Remembrance, we are ready for such a scenario and intend to react to any political movement falsifying historical reality. Our activities will be supported by the Ministry of Foreign Affairs of the Republic of Poland.

The Trails of Hope are also an opportunity to present Poland and Polishness in the places where General Anders assembled his army: in such post-soviet countries as Kazakhstan, Uzbekistan, Turkmenistan, and Kyrgyzstan. What initiatives does the Institute intend to launch there?

We want to use the “Trails of Hope. Odyssey of Freedom” project to briefly present the history of the journey and fight of Polish soldiers together with all its local chapters. To that end, we have designed an exhibition and accompanying promotional materials in various languages to reach the largest possible number of people. Moreover, we will launch a special website promoting the history of Poland among foreign readers.

The new project will be conducted in 2022–25. What will the world learn about the history of Poland? What role can you see for historical diplomacy in that endeavour?

Speaking of the stories of the lives of the Anders’ Army soldiers, we want to make foreigners aware of the scale of the determination and engagement of Poles in the fight for a Europe free of totalitarian ideologies. Working together with the Ministry of Foreign Affairs, we also want to build a positive image of Poland in the world, promoting our history and our values. The presentation of the Polish point of view is also to offset Russia’s manipulated version of the historical narrative on the Second World War that is disseminated in post-soviet states.