The 80th anniversary of the German Genocide of Jews

The Sub-Branch of the Institute of National Remembrance in Kielce and the "Świętokrzyski Sztetl" Museum and Educational Center in Chmielnik invites you to a press conference, which will be held on 7 October, at 10:00 a.m., at the "Świętokrzyski Sztetl" in Chmielnik, 14 Wspólna St. The press conference will be followed by the opening of the “Aktion Reinhardt 1942-1943” exhibition, and the scientific conference about Operation Reinhardt in the Kielce region. 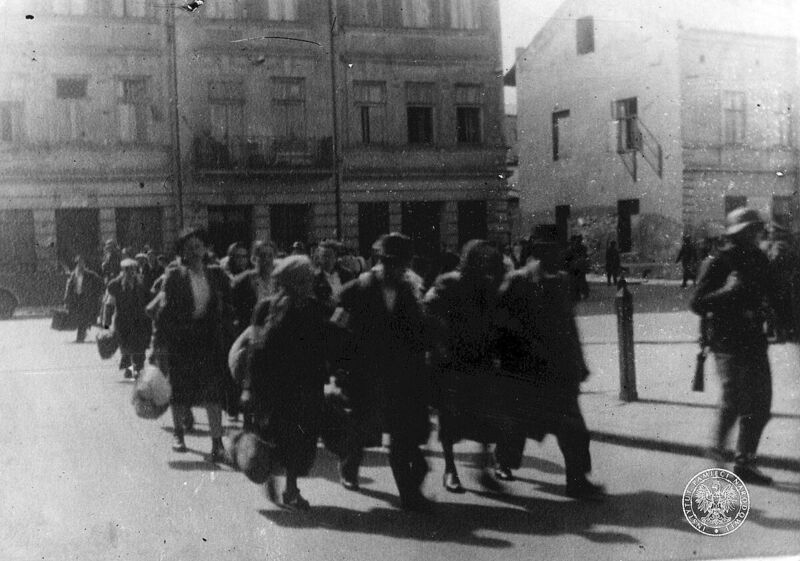 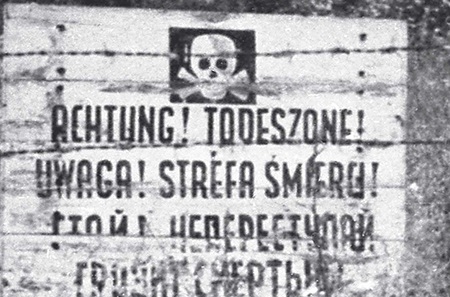 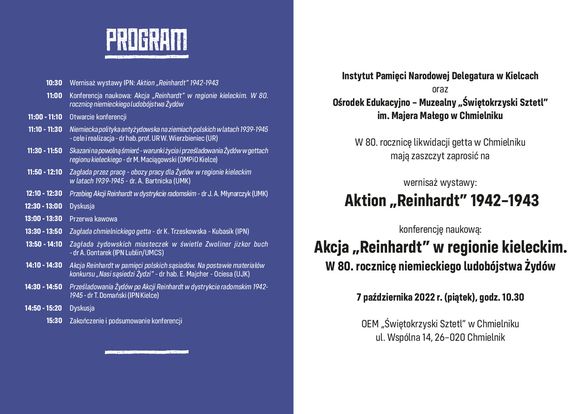 During the event, representatives of the IPN’s Sub-Branch in Kielce and "Świętokrzyski Sztetl" will present current initiatives related to the commemoration of the 80th anniversary of Operation Reinhardt in the Świętokrzyskie region. The conference will also be attended by a representative of Polish Radio Kielce, who will provide information on the series of broadcasts entitled "Operation Reinhardt; target: Swietokrzyskie".

11:00 a.m.      Scientific conference: Aktion Reinhardt in the Kielce region. The 80th anniversary of the German genocide of Jews

The event is held under the honorary patronage of the Polish Minister of Foreign Affairs, Zbigniew Rau and the Ambassador of Israel to Poland, Yacov Livne

In 1942, the German occupation authorities began a planned genocide of the Jewish population in the occupied Polish territories of the so-called General Government and in Bezirk Bialystok. The operation was given the code name "Reinhardt." As a result, from March 1942 to November 1943, about 2 million Jews were killed.

On 4 August 1942, in the Radom district, part of the Kielce region, "Aktion Reinhardt" started by the liquidation of the small ghetto in Glinice, Radom. The Kielce ghetto was liquidated on 20—24 August. In the largest ghetto in the area, in Czestochowa, the liquidation took place from 22 September to 7 October 1942. Each of these processes was carried out with extreme brutality and violence. The sick, crippled, elderly and pregnant women were murdered on the spot. Others were transferred to the nearest train station, from where the cattle cars took them to the German extermination camp in Treblinka. As some Jews attempted to avoid deportation to extermination camps, a German decree was issued on 10 November 1942, in order to create the so-called secondary ghettos, where several thousand Jews were gathered. In January 1943, they were murdered in extermination camps. After the "liquidation" period of the summer and fall of 1942, the Holocaust entered its further phase. During this time, the Germans liquidated the remains of the ghettos, naming the towns "Judenfrei" (free of Jews), and condemning Jewish refugees to immediate extermination as part of the "Judenjagd" (the hunt for Jews).

The genocide carried out by the German state in the Radom district accounts for 360,000 Jews sent to death as part of "Aktion Reinhardt." Many thousands were killed during the mass shootings that accompanied all liquidation operations.

Read more on the IPN website about German death camps.