The latest article by Karol Nawrocki Ph.D., President of the Institute of National Remembrance, on the Warsaw Uprising. The text has been published on the wszystkoconajwazniejsze.pl portal - in Polish, English, Spanish, French and Ukrainian 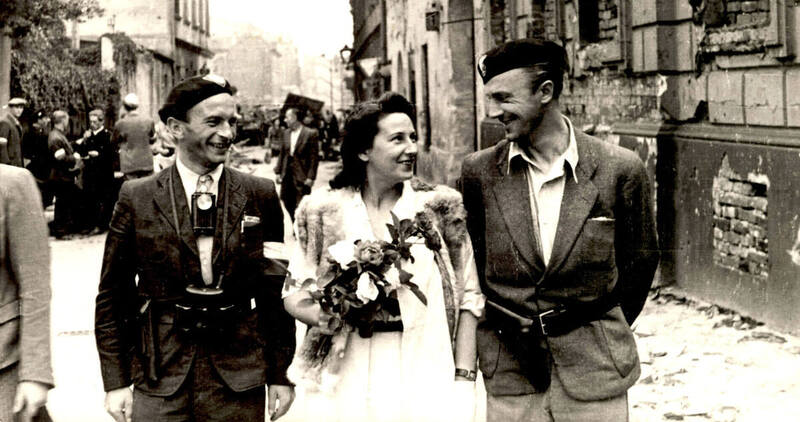 On 1 August 1944, the Varsovians faced the last battle against the German Nazi totalitarianism.This was a struggle for everything that could not be provided by the Red Army tanks progressing from the east: for freedom, democracy, and the right to make our own decisions.

At a first glance, a typical wedding. The priest reads the words of the vow. The young couple repeat them carefully and exchange the rings. They kiss, there are flowers, and congratulations from many guests. There is also a photographer, and even a film crew. Yet the ceremony taking place in Warsaw on 13 August 1944 was special, indeed. The groom, 22-year-old Bolesław Biega, dressed in military uniform, has an arm in sling: this is the result of wounds from a few days earlier when he took part in the battle for the Central Post Office. The bride, 20-year-old Alicja Treutler, instead of a white dress is wearing a borrowed blouse with an arm band with the red cross – a sign she is a nurse. The wedding is improvised, and they can forget about the honeymoon. Shots are fired and bombs explode around them. The second week of the Warsaw Uprising is slowly coming to an end.

Gunfire, bombs, damage – residents of the city experienced it all five years earlier already. On 1 September 1939, Poland was attacked by the Nazi Germany – this is how World War II started. When a few days later the Red Army struck from the east, the fate of the country of 35 million people was sealed. And yet, Warsaw heroically kept defending itself. It only it gave in to Wehrmacht at the end of the month. What followed was the long and blood-soaked German occupation: the torment of the ghettoes and death in gas chambers for the Jews, and roundups, open or secret executions, deportation for forced labour and concentration camps for the Poles.

After five years of terror, incomparably worse than in western Europe, Warsaw had significantly bled out. But it was also full of hope of shaking off the foreign shackles soon. The occupant, previously so brutal and proud, seemed week and disheartened in the summer of 1944. In Normandy, Wehrmacht was unable to stop the invasion of the allies. At the eastern front, it hastily fled before the Red Army. In occupied Poland, despite repressions, the resistance movement reached its peak numbers. The Home Army, the military force of the Polish Underground State, had approximately 380 thousand sworn soldiers across the country. Several thousand in Warsaw alone. Indeed, shortage of weapons was a serious problem. The plans were, however, to disarm the Germans and obtain weapons dropped by the allies.

Joy in Paris, tragedy in Warsaw

In Paris, where the uprising against the Germans occurred on 19 August 1944, the resistance movement was not at all stronger. They could send about 20 thousand poorly armed people to fight – too little to deal with Wehrmacht garrison. The allies first did not think of supporting Paris, their strategic plans assumed by-passing the city and marching on to the east. At the key moment, however, they changed their decision and directed two divisions to help the resistance. This was the turning point. German garrison capitulated on 25 August, and its commander failed to follow Adolf Hitler’s order to destroy the city. Paris was free. A day later, residents of Paris greeted the victorious army at Champs-Élysées, including the French Second Armoured Division of General Philippe Leclerc.

The fate of Warsaw, standing up to fight on 1 August 1944, was tragic. Indeed, in the first days, the resistance managed to control a large part of the city. In the districts conquered, free Poland revived instantly with civil authorities, Polish radio broadcasts, and Polish newspapers. The Germans, however, soon gathered backup and brutally proceeded with the uprising. At Wola, one of the districts on the left bank of the Vistula River, the “backup forces” murdered many thousand defenceless civilians, including old people, women, and children. Similar crimes also took place in the neighbouring Ochota district, at a slightly smaller scale. In other districts, the Germans faced fierce resistance, but kept moving forward, destroying one house after another. Despite vast disproportion of the forces, the fights lasted for 63 days. The death toll included several thousand members of the resistance movements and as many as 150-200 thousand civilians. The survivors were banished from the city. Surviving buildings were set on fire and blown up still long after the uprising gave in. When the Germans definitively abandoned Warsaw in January 1945, it was already a city of ruins.

Contrary to Paris, Polish capital did not obtain any true help. The help was not provided by the Red Army, although during the uprising it was just several hundred meters away, on the other bank of the Vistula. Joseph Stalin, who allied with Hitler five years earlier, now used the opportunity again to destroy the Polish independence elites by German hands. In the important weeks on the uprising, it did not even allow ally aircraft taking off from Italy with supplies for Warsaw to touch down on soviet airfields. The fall of the uprising was favourable to Stalin: it was to make it easier for him to break the brave nation and to subjugate Poland.

When French General Leclerc marched in glory in Champs-Élysées, his Polish counterpart, Stanisław Maczek, had just experienced his glory days in the victorious battle of Falaise. Later, with his First Armoured Division, he liberated Belgium and Holland, ending his combat trail with conquering Wilhelmshaven, an important base of the German Navy. He could not, however, march in glory in the freed capital of his own country. Communists taking power in Poland with the support of soviet bayonets deprived Maczek of his citizenship. The general died years later in the United Kingdom.

The strive for memory

He was not the only one to choose the life on emigration after the war. Young members of the resistance who got married on 13 August 1944 in the fighting Warsaw also did not see a place for themselves in the enslaved country. They lived in the United States of America. “We decided we did not want to return under soviet occupation,” said Bolesław Biega years later. In the “people’s” Poland, members of the Warsaw uprising were treated with distrust by the authorities, kept under surveillance, sometimes with brutal investigations. Among false accusations they faced, there were also accusations of collaboration with the Germans, which was particularly painful to people who risked their lives to fight for independent Poland. The memory of the Warsaw Uprising was long supressed and deformed. It was still passed on in families and cherished in independent and opposition circles.

After the fall of the communist system, members of the uprising could finally be commemorated as they deserve. The state-of-the-art Warsaw Rising Museum opened in 2004 at the Polish capital is impressive also to foreign visitors. Foreign visitors to Poland also watch with recognition when on 1 August of each year, at 5:00 PM, exactly at the time of the outbreak of the uprising, the drivers and pedestrians stop for a minute in the streets to commemorate the heroes at the sound of alarm. This happens not only in Warsaw, but also in other cities. This is because the memory of the uprising has long been radiating onto entire Poland. Perhaps because this movement was the essence of the fate of the nation which, as Pope John Paul II used to say “in the terrible struggle of World War II, did not spare victims to confirm the right to independence and sovereignty in its own homeland. The Warsaw Uprising was the final expression of this.”