ARTICLE by Karol Nawrocki, Ph.D.: The soldiers of Polish freedom

The totalitarian authorities which they were fighting against called them “bandits” and “enemies of the people”. Today, we are restoring the Cursed Soldiers to their rightful place in the national pantheon. 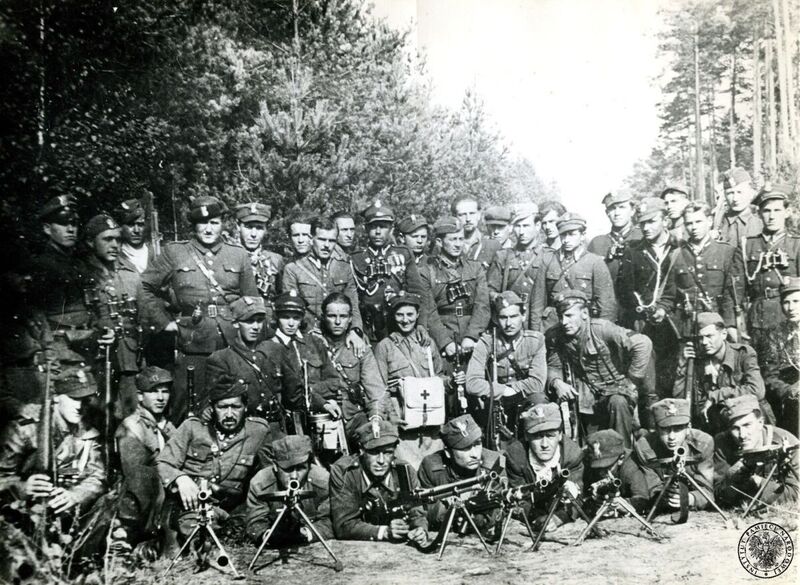 The prisoners on death row never knew who would be taken for execution or when. “The time spent in prison on Rakowiecka Street was marked with bloody stages” recalled Mieczysław Chojnacki “Młodzik”, a soldier of the Home Army and the post-war anti-communist underground. On that fateful day, the warden came and read out the names of those who were to be executed. The method was the same as that used during the Katyń Massacre – a single shot to the back of the head. On Thursday, 1 March 1951, Aleksander Drej, an executioner at the prison in the Mokotów district of Warsaw, murdered Lieutenant Colonel Łukasz Ciepliński “Pług” and six other who served under him in the exact same way.

For the past eleven years, on 1 March, we have been celebrating the Cursed Soldiers National Remembrance Day in Poland. “The Cursed Soldiers” is the name given to the soldiers of the pro-independence underground who, after World War II, opposed the brutally imposed communist rule and the dependence of their homeland on the Soviet Union. They were indomitable in their fight for freedom and true independence, and remained faithful to the oath they had taken.

In mid-January 1945, the Soviet offensive from the direction of the Vistula River was launched. The Red Army quickly drove back the Wehrmacht and moved westwards. General Leopold Okulicki, who was the Commander of the Home Army, had no doubts what this meant for Poland — as he wrote — “a change from one occupation to another”. The tanks with red stars did not bring freedom but new enslavement that was difficult to combat. The Home Army, though experienced in fighting the Germans and operating underground, was already significantly weakened, and the Soviet Union seemed to be at the peak of its power. After more than five years of occupation, Polish society had lost a lot of men and was tired. The Allies were making arrangements with Stalin and the fate of Poland was of almost no significance for them. Under the circumstances, Okulicki ordered the dissolution of the Home Army. The underground was to comprise only of “small staffs operating in conspiracy”.

However, the reality was somewhat different. The terror spread by the NKVD and the Polish communist Department of Security saw some soldiers remain underground or return underground quickly. The resistance movement was also joined by people who had not been earlier involved in armed operations, due to — to give an example — their young age.

The mission of the Home Army under these new circumstances was undertaken by the Armed Forces Delegation for the Homeland established in May 1945. In turn, the DSZ’s activities were continued by the Freedom and Independence Association formed in September of the same year. Although the existing structures — under the command of Colonel Jan Rzepecki — were against the armed struggle as they believed it to be doomed to failure, strong partisan groups continued their operations in many parts of Poland. This resulted in the periodic occurrence of diarchy — the communists controlled large and medium-sized cities and towns, and the pro-independence underground ruled other areas.

With the passage of time, the underground also gained significant influence in other areas. The communists in the Łódź region and neighbouring areas were attacked by the Underground Polish Army led by Captain Stanisław Sojczyński “Warszyc”, and in the Podhale region – by the group commanded by Major Józef Kuraś “Ogień”. Skilled and charismatic officers were experienced in managing such activities even in areas they were unfamiliar with. In Pomerania, the communists were terrified of Major Zygmunt Szendzielarz “Łupaszka”, the Commander of the Home Army’s 5th Vilnius Brigade.

In total, well over a hundred thousand people joined the ranks of the post-war pro‑independence underground. Most of them were connected with the above mentioned structures. Thirty to forty thousand were associated with the national resistance movement — primarily the National Military Union. Other groups, organisations and units — local or covering larger areas — were equally numerous and operated independently due to a lack of contact or for ideological reasons. When we take into account those who risked their lives to shelter the partisans, provide them with food, treat them, etc., we can see the factual scale of social resistance against the totalitarian rule imposed in Poland by Moscow.

In order to face this anti-communist uprising, as this phenomenon is sometimes referred to by some historians, the authorities had to employ more than just their quickly expanding security apparatus, which combined brutality with increasingly refined methods of uncovering and eliminating opponents. The Department of Security was supported not only by the NKVD and Soviet advisers, but also by units of the “people’s” army and other uniformed groups.

No one who thought realistically planned an armed struggle to defeat the Soviets and their Polish henchmen. Thus, the units stationed in forests tried to simply survive to see better days, i.e. the communists’ defeat in elections or the outbreak of the third world war, in which the West would clash with the USSR. Until such time, the armed activities were limited mainly to self-defence. They also protected the local population against communist oppression and liquidated particularly eager party activists, the officers and agents of the Department of Security. They freed prisoners, disarmed militia stations, and acquired funds for further activities.

This David-and-Goliath clash would only end in victory for one side in the long run. The elections to the Seym held in January 1947 and falsified by the communists, and the subsequent “amnesty” declared by the authorities significantly clipped the wings of the underground. Yet, the armed resistance continued on a lesser scale (including in the Eastern Borderlands of the Second Polish Republic seized by the Soviets). The last Cursed Soldier, Józef Franczak “Lalek”, was hunted down and killed in 1963.

He was not the only one to pay the ultimate price in armed resistance against the communists. The life stories of almost all the best known Cursed Soldiers came to tragic and sudden ends in the late 1940s or early 1950s. These brave people’s lives ended much too soon as they died in combat, were tortured to death in prisons or murdered as a result of state-sanctioned crimes. As a matter of fact, many of those who believed in the communists’ “amnesties” and came out of hiding and wanted to rebuild their country were arrested or even sentenced to death. We can assume that tens of thousands of victims of the communist regime were buried on Polish lands after World War II. Many of them were buried in secret — their families could not even light a candle at their graves.

The relatives of those murdered had to live for a long time with the stigma of “the bandits’ families” were regarded as second-class citizens. Inasmuch as the authorities of the Polish People’s Republic sometimes diversified the narrative about the Home Army by contrasting the “reactionary commanders” with brave, yet naïve low-ranking soldiers, the Cursed Soldiers were incessantly slandered and erased from history en masse.

The renaissance of remembrance

This started to change, albeit not without difficulty, as late as in independent Poland. At present, patriotic youths are proudly wearing T-shirts with “Łupaszka”, “Warszyc”, “Pług”, and rock stars and rappers make references to them in their lyrics. This change is also owed a great deal to the efforts of the Institute of National Remembrance, its long-lasting studies and educational activities, and also its unprecedented searching for the remains of these forgotten heroes and unearthing the names of those buried in unmarked graves. One more task has been recently added to that list: the Institute of National Remembrance has assumed responsibility for the Museum of Cursed Soldiers and Political Prisoners of the Polish People’s Republic, which is currently being established. I am convinced that the former prison in the Mokotów district, the site of the torture and execution of Ciepliński and many others, will become one of the most important museums in this part of Europe within the next few years. May the fate of those who had given their lives for Poland be known also to the next generations.

Karol Nawrocki, Ph.D., President of the Institute of National Remembrance