We are telling the world about Poland: Jarosław Szarek, Ph.D., on the May 3 tradition.

"The May 3 tradition belongs to the Polish soul" “Welcome, May, beautiful May, a paradise for Poles to stay,” was sung by generations, and the slogan “May the Third” has been chanted at Poles’ patriotic demonstrations for more than two centuries all over the world. 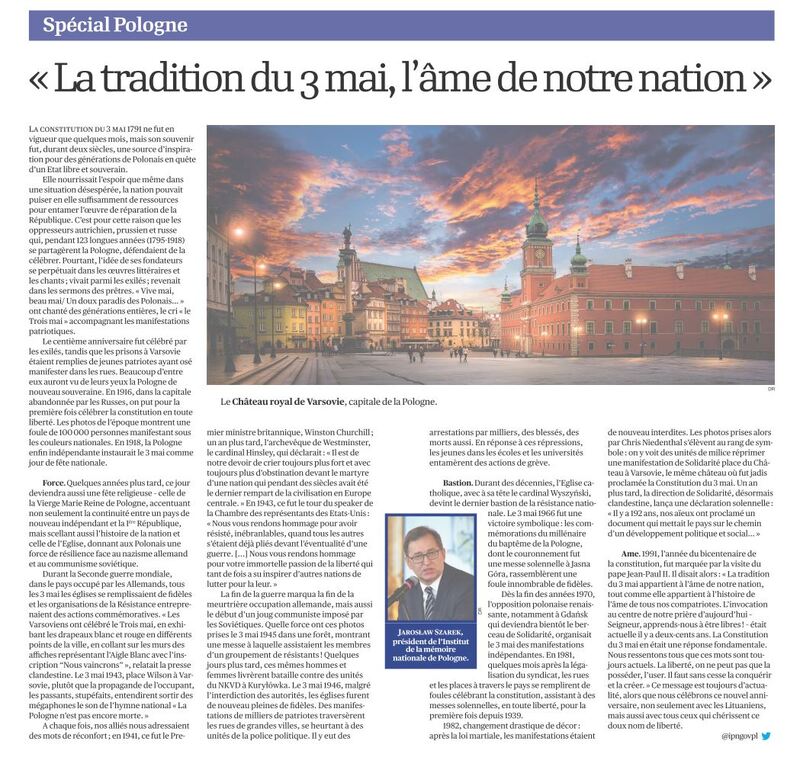 Readers on several continents are to receive another text about the recent history of Poland: the Institute of National Remembrance is once again contributing to "We Are Telling the World about Poland" project initiated by The New Media Institute, in which scientists, historians and politicians, not only from Poland, share their opinions on our country’s recent past. We encourage you to read an article by the President of the Institute of National Remembrance, Jarosław Szarek Ph.D. "The May 3 tradition belongs to the Polish soul" in this weekend's edition of L'Opinion in the Dossier Pologne, in which he discusses, among others, the forms of celebrating the anniversaries of the adoption of the Constitution of 3 May 1791, also abroad.

The article appeared in the 29th edition of the "Wszystko co Najważniejsze" monthly and on the http://wszystkoconajwazniejsze.pl/. It has been translated into English, French, Spanish, Italian and Russian. Texts authored by:

Andrzej Duda: The pride of the Republic of Poland,

Marcin Chludziński: Independence is good for the economy,

Prof. Marek Kornat: "The Polish Revolution of Freedom" have also appeared as part of the project.

"The May 3 tradition belongs to the Polish soul"

The May 3 Constitution of 1791, the first in Europe and the world’s second after the American Constitution, was in force for just a dozen or so months but the memory of it was an inspiration for generations of Poles yearning for freedom and a sovereign state for two centuries to come.

“The May Dawn” (Polish: Majowa jutrzenka) brought hope that a nation, even when confronted with a hopeless situation, can muster enough strength to undertake the task of repairing the Republic. Therefore, the partitioners and occupiers from Austria, Prussia, and Russia who divided Poland between themselves for as long as 123 years (1795-1918), tried to obliterate Poland from the map of Europe and banned the observance of the May 3 Constitution anniversary. But the idea that inspired the authors of the first European constitution continued in literary works and songs; it lived on among emigrants, recurred in sermons by the clergy on the Polish soil. “Welcome, May, beautiful May, a paradise for Poles to stay,” was sung by generations, and the slogan “May the Third” was chanted at patriotic demonstrations.

The centennial anniversary of the May 3 Constitution was celebrated in emigration circles; but in Warsaw, prisons were packed with young participants of patriotic demonstrations. Many of them lived to see independence. In 1916, it was possible to freely observe the anniversary for the first time in Warsaw after the Russians left. The preserved photographs show a crowd of one hundred thousand people carrying national flags in the streets of the capital city which shook off foreign rule two years later. On the threshold of its regained independence, the Republic established the Third of May a national holiday.

A few years later, the anniversary of the passing of the May 3 Constitution was also made a Church holiday, designated as the Feast of Our Lady the Queen of Poland. Thus the date gained a much wider dimension as it underscored not only a continuity between the reborn Polish State and the First Republic but also united the history of the Nation and the Church, which gave the Poles strength in the clash with the Nazi German and communist Soviet totalitarianisms in the 20th century.

In the German-occupied Poland during World War 2, every year on May 3 churches were filled with the faithful, while the underground organizations carried out the date-related actions. Partisan units in forests gathered for field Masses. The underground press reported: “Warsaw celebrated May 3 by hanging out red and white flags in many parts of the city, by placing an enormous number of stickers on walls with the White Eagle and an inscription on them saying “We Will Win,’ by displaying big-size posters, and by laying wreaths at monuments.” On May 3, 1943, passers-by at the Wilson Square unexpectedly heard the Polish national anthem “Poland has not yet perished” coming out from megaphones installed to broadcast German propaganda announcements.

On the anniversaries of May 3, the Allies would address the Poles with words aimed at lifting their spirits. In 1941, British Prime Minister Winston Churchill delivered a message, and a year later, the Archbishop of Westminster Cardinal Arthur Hinsley made an appeal: “Today we are obliged to protest and call even more strongly and with growing determination to oppose the cruel torments of the nation who constituted the bulwark of civilization in Central Europe for centuries.” In 1943, Speaker of the United States House of Representatives Sam Rayburn delivered a special address to celebrate the Polish National Holiday. “We salute you, because you stood unshaken when all others had bowed down before the apparition of war…. We salute you, because in this war for your own existence you have given your help and love to millions of Jews condemned to slaughter behind the awful walls of the ghettos. We salute you for your immortal love of freedom, a love which has incensed the other nations to defend their freedom.”

The end of World War 2 was for Poland the end of the genocidal German occupation but at the same time it marked the beginning of the communist captivity imposed by the Soviet Union. The photographs taken on May 3, 1945, showing a field Mass for one of the underground units are very telling. Just a few days later, the soldiers fought against Soviet NKVD troops at the battle of Kurylovka. A year later, on May 3, 1946, churches across Poland were filled with the faithful even though communists forbade celebrating the holiday. Many thousands took part in patriotic demonstrations held in biggest cities, including in Krakow, Katowice, Wroclaw, Poznan, and Gdansk. There occurred numerous clashes with security services, a few thousand participants were arrested, some were injured or even killed. In response to the repression, high school and university students announced strike actions.

After the political opposition and military pro-independence units operating in the underground were crushed, the Catholic Church led by the Primate of Poland Cardinal Stefan Wyszyński remained the last bastion of resistance for decades to come. The Church fought a victorious battle with the communist regime during the ceremonies to commemorate the millennium of Poland’s baptism, the culmination of which were the celebrations on May 3, 1966, at the Jasna Góra shrine attended by countless numbers of the faithful.

Independent May 3 demonstrations were held by the opposition emerging in late 1970s, including in Gdansk which was soon to become the cradle of the Solidarity Movement. Once Solidarity was established, squares in cities and towns on May 3, 1981, were packed with participants of the solemn Holy Masses who could freely celebrate the holiday for the first time since 1939.

It was strikingly different in 1982, after the imposition of martial law. Symbolic are the photographs taken on that day by Chris Niedenthal which show police squads cracking down on pro-Solidarity demonstrators at the Castle Square in Warsaw – at the walls of the very Royal Castle in which the Constitution was passed in 1791, and from where the King with representatives of all the estates proceeded to the Cathedral, whose walls saw the police beat up demonstrators in 1982. A year later, the leaders of Solidarity that meanwhile went underground issued a special statement that started with the words: “One hundred and ninety-two years ago, our forefathers passed a document which put the country on the path of political and social development…”.

In 1991, on the bicentennial anniversary of the Constitution, Pope John Paul II came to address the Nation with the words: “The tradition of May 3 belongs to the history of my soul just as it belongs to the history of the soul of all my compatriots. Our prayer invocation of today: ‘Teach us to be free’ was valid then, two hundred years ago. The May 3 Constitution was a vital response to it.  We all feel how valid it is today, two hundred years later. Freedom cannot be only possessed and used, it must be constantly gained and created anew”. This message is valid today as well as we celebrate together not only with the Lithuanian people but with all who hold freedom dear. As the authors of the May 3 document put it: “Any person coming into Poland, from whatever part of the world, or returning from abroad, as soon as he sets his foot on the territory of the Republic, becomes free…”.

For more information on the project and the previous articles: visit "We are telling the world about Poland" Collected Content