Sławik was a journalist, participant of the Silesian Uprisings, and member of the Polish Socialist Party. During the Second World War, he organized help for Polish and Jewish refugees who found themselves in Hungary; it is estimated that he saved almost 30,000 people, among them some 5,000 Jews. For that, he was posthumously awarded the title of Righteous Among the Nations and the Order of the White Eagle. 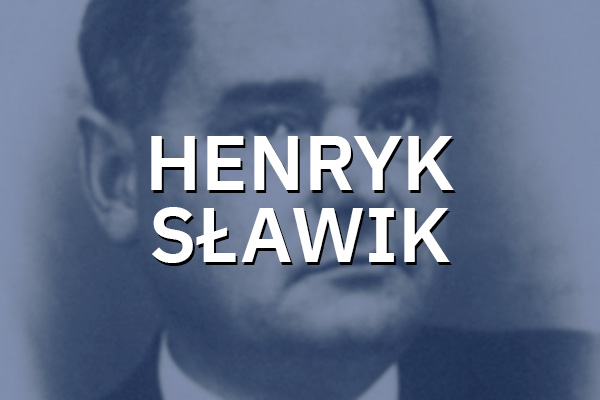 Henryk Sławik was born on 15 July 1894 in Szeroka, now part of Jastrzębie-Zdrój. After graduating from primary school, he worked as a laborer. Drafted into the Prussian army in 1914, he was taken prisoner by Russia, and only after the war, in 1918, returned to Upper Silesia. There, he fought in the Silesian Uprisings, earning  the Cross on the Silesian Ribbon of Valor and Merit, and the Cross of Independence.

From 1920, he worked for “Gazeta Robotnicza” – initially as a journalist, then as a publisher and editor-in-chief. In the years 1928–1930, this member of the Polish Socialist Party sat on the Katowice City Council. In 1928 he married Jadwiga Purzycka, and in 1930, his only daughter Krystyna was born. After the outbreak of World War II, Sławik managed to reach Hungary. In a resettlement camp, he met József Antall, the government commissioner for refugees, who helped him run the Citizens' Committee for the Care of Polish Refugees in Hungary. Between 1940 and 1944, these two managed to save at least 5,000 Polish Jews. Arrested by the Gestapo in July 1944, Sławik took all responsibility, protecting Antall from inevitable death, though not himself: transferred to the German concentration camp of Mauthausen-Gusen, he was hanged on 23 August 23 1944.

His Jewish associate, the later Israeli politician and diplomat Tiber Zimmerman, saw to it that in 1990, Sławik got the title of Righteous Among the Nations for risking his life to save Jews; in 2010, Lech Kaczyński posthumously awarded him the Order of the White Eagle.