The Institute of National Remembrance – Commission for the Prosecution of Crimes against the Polish Nation was established 20 years ago – on 19 January 1999, pursuant to the Act of 18 December 1998, as an expression of the belief that no unlawful action by the state against the citizens can be classified or forgotten.

In order to celebrate the 20th anniversary of the establishment of the Institute of National Remembrance, Poczta Polska [the Polish Post] has issued a commemorative stamp with the image of a pin and the most important dates concerning 20th century Polish history: 1918, 1939, 1945, 1980 and 1989.

The folder attached to the stamp briefly describes the activities of individual offices of the Institute: the Chief Commission for the Prosecution of Crimes against the Polish Nation, the Vetting Office, the IPN Archive, the Office for Commemorating the Struggle and Martyrdom, the Office of Search and Identification, the National Education Office and the Historical Research Office. 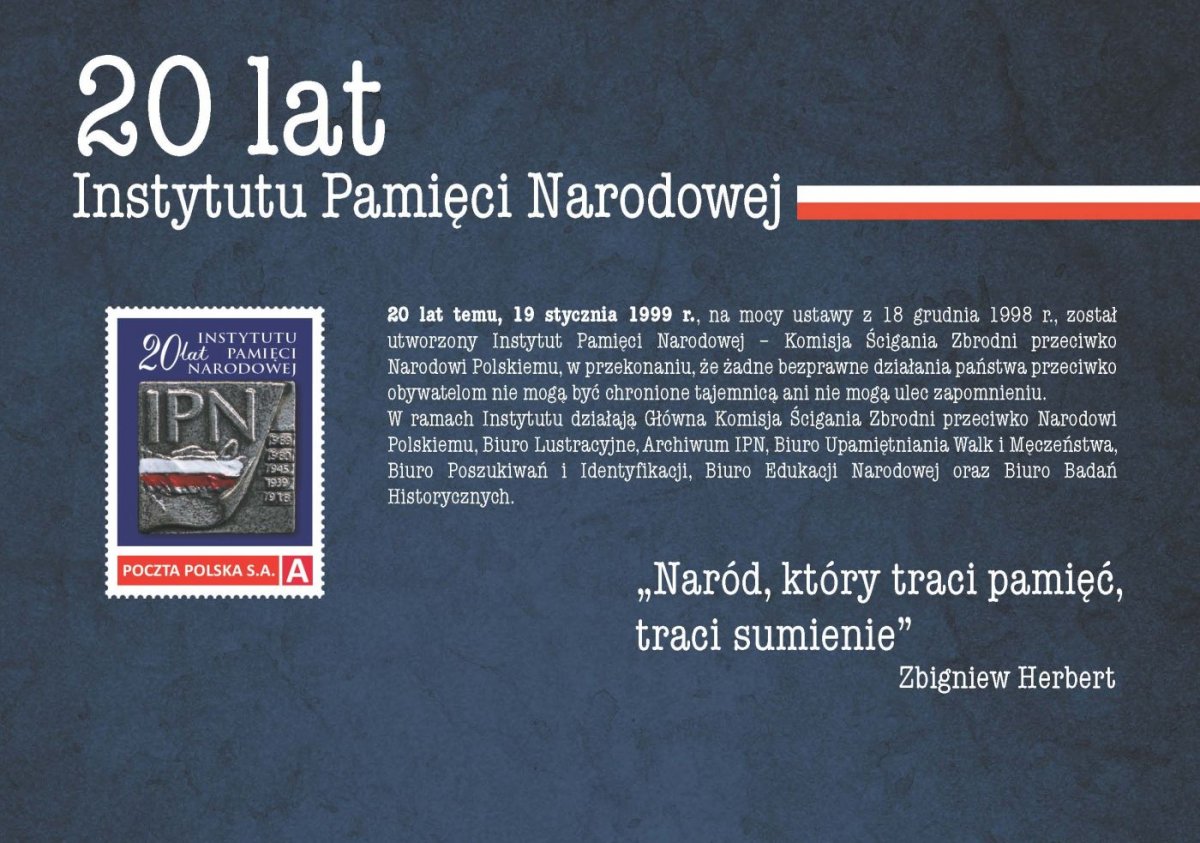 The mission of the Institute of National Remembrance – Commission for the Prosecution of Crimes against the Polish Nation is to research and popularize the modern history of Poland and to investigate crimes committed from 8 November 1917, throughout the Second World War and the communist period, to 31 July 1990.

The Institute was established by the Polish Parliament by virtue of the Act of 18 December 1998. Its actual activity began in the middle of the year 2000, after the Seym (the lower chamber of the Polish Parliament) with the Senate’s consent appointed the first President of the IPN. This post was taken by a lawyer, Professor Leon Kieres, who headed the Institute until December 2005. In the years 2005–2010, the function was held by Professor Janusz Kurtyka. Łukasz Kamiński, Ph.D.  headed the IPN from 28 June 2011 until 22 July 2016. Jarosław Szarek, Ph.D. was nominated for President on 22 July 2016.

The principles defining the work of the Institute of National Remembrance are:

These words were transformed into years of arduous work and hundreds of published books, seminars, exhibitions and conferences concerning various, sometimes previously undiscussed, issues. Moreover, this work has resulted in uncovering the truth about the most difficult but also the most triumphant moments in the history of Poland and the Polish Nation. These are also activities aimed at popularizing recent history among the youngest generation, including rallies, competitions and reaching out to them through the Internet and social media. In certain cases the IPN’s work has proved to be a race against time in order to honor the heroes who have been consigned to oblivion for years.