On 27 September, the Day of the Polish Underground State, we reccommend a short outline of the organization of Poland's WWII resistance. 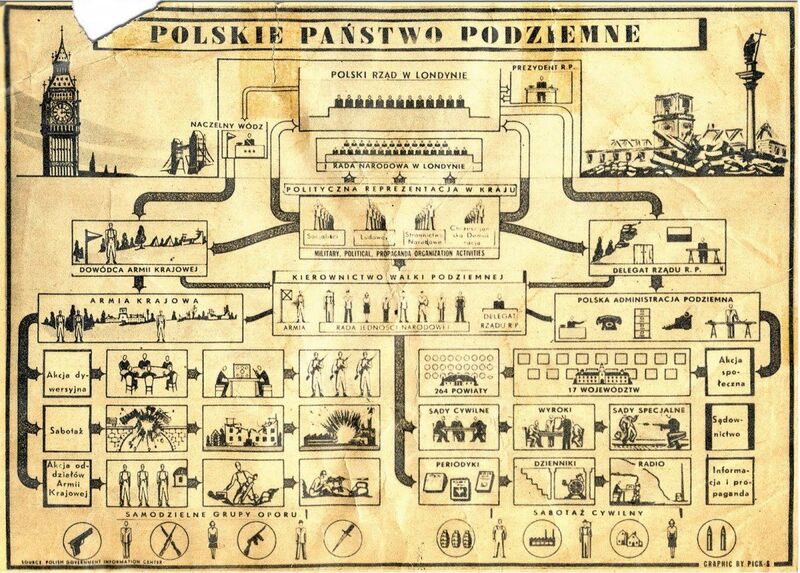 On 1 September 1939, Germany began its invasion of Poland, thus setting off the Second World War. Seventeen days later, the Red Army invaded the Polish state as it was fighting against the Wehrmacht, but Poland put up resistance for almost three more weeks. It was alone, since France and Britain had failed to honour their earlier guarantees and provide military assistance. The partition of Poland by Hitler’s Germany and Stalin’s Soviet Union did not force Poland into capitulation. Polish President Ignacy Mościcki, interned in Romania, used his constitutional powers to appoint a successor, Władysław Raczkiewicz, who in turn appointed a government led by General Władysław Sikorski. Even though the Polish territory had been occupied by Germany and the USSR, the Polish state as such continued to exist as a legal entity. State authorities, which went into exile first in France and after her fall in the UK, were recognized by the international community and led the struggle for Polish independence throughout the war.

No sooner had the Polish Army soldiers fired the last shots in their unequal fight against the two aggressors than the underground struggle against the occupiers began. On 27 September 1939, General Michał Tokarzewski-Karaszewicz set about building a clandestine organization called Service for Poland’s Victory. Soon after that, on 13 November 1939, General Sikorski founded the Union of Armed Struggle as a cross-party national military organization, with General Kazimierz Sosnkowski as its commander. On 4 December, he issued his first organizational instruction. Colonel Stefan Rowecki was named the Union’s commander for the German-occupied areas, while General Tokarzewski-Karaszewicz assumed command in the Soviet occupation zone. Following the Polish government’s evacuation to the UK in June 1940, Rowecki became the Union’s commander for the entire country under occupation, and was promoted to general. He is credited with creating and commanding an underground army – the Home Army – named that in early 1942 from the Union of Armed Struggle.

In time, the patriotic and selfless commitment and organizational skills of tens of thousands of Polish men and women from all social classes led to the creation of the Polish Underground State, which had no equivalent in any of the occupied European countries: nowhere else, except in Yugoslavia, were such powerful clandestine armed forces created, and nowhere was civilian administration so well organized. The Underground State in occupied Poland was subordinate to the Polish government-in-exile in London. Its military arm was the Home Army, which in wartime conditions also took over some judiciary functions (it oversaw the Special Courts set up in 1942). The role of the secret administration was fulfilled by an extensive apparatus of the Government Delegation at Home, which also oversaw the Civilian Special Courts. In short, the underground authorities continued key functions of the peace-time state – military, educational or judicial – and added new ones, such as "Żegota”, the Council for Aid to Jews, flexibly responding to the realities of the occupation.

In 1943, the political parties forming the coalition government established a Homeland Political Representation. After more political parties joined the Representation, on 9 January 1944 it was  transformed into the Council of National Unity. The clandestine struggle of military and civilian structures was coordinated by the Directorate of the Underground Resistance, founded on 15 July 1943. Its head was General Tadeusz Komorowski, who became the Home Army’s commander-in-chief after the Germans arrested General Rowecki. The greatest political and military effort of the Polish Underground State was Operation Tempest, which started in the region of Volhynia in March 1944, and covered most of the occupied Polish lands. The Home Army would take areas of Poland from the Germans who were retreating from the Red Army, and then, the Home Army units and the administrative apparatus of the Government Delegation would come out of hiding, acting as hosts of Polish lands vis-à-vis the Soviets. This step was taken to show the Polish side’s goodwill towards “the ally of our allies”, as the USSR was called, despite the risk of Soviet represions.

However, the Soviets were not going to tolerate any truly independent armed forces. Having captured Polish territories, they began to ruthlessly and systematically establish communist power structures and enforce their rule upon the Polish people. When Operation Tempest ended in failure and Soviet reprisals despite the sacrifice and bravery of the soldiers, the Home Army command decided to attempt to liberate Warsaw before the Soviet troops marched into the city. The Warsaw Uprising, the biggest battle waged by the Underground State, ended in defeat: tens of thousands of Warsaw residents lost their lives, and even before the gunfire died down, the Germans set about destroying Poland’s capital. After the Uprising, the Home Army, now headed by General Leopold Okulicki, as well as the Government Delegation and the Council of National Unity, resumed their activities. Even so, the losses they sustained in the August insurrection meant they could only operate on a much smaller scale. On 19 January 1945, when most of Poland had already been taken by the Red Army, General Okulicki decided to dissolve the Home Army, but the Underground State structures remained in hiding, because the occupation of Polish lands by the Red Army did not lead to the reinstatement of an independent Republic of Poland.

In March 1945, the NKVD arrested leaders of the Polish Underground State, including General Leopold Okulicki and Government Delegate Jan Stanisław Jankowski, and tried them in Moscow. Following the Yalta Conference in February 1945, the free world withdrew its support for the Polish government-in-exile, a step that brought on the dissolution of the Government Delegation at Home and the Council of National Unity.

That was the end of the Polish Underground State, formed against totalitarian enemies but destroyed by democratic allies.