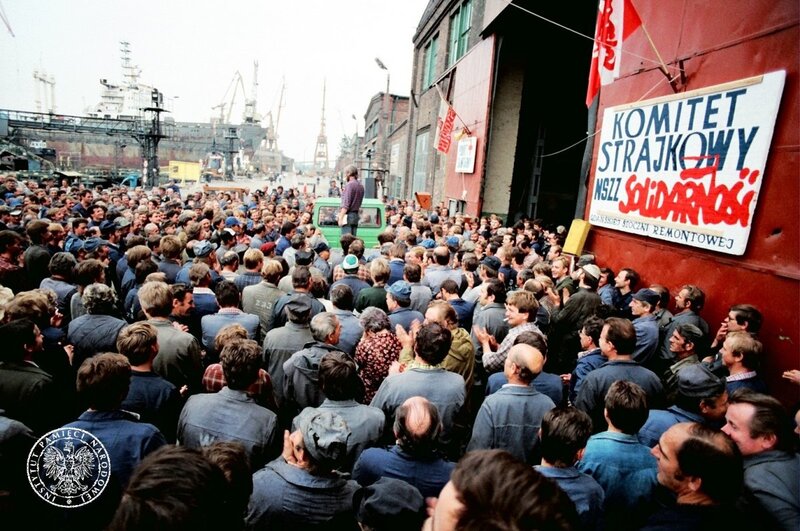 Although the independent opposition groups were small (they associated a few dozen people each), the group of activists of the Free Trade Unions of the Coast who initiated the strike at the Gdańsk Shipyard was of key importance for the strikes in the summer of 1980.

The emergence of “Solidarity” — the largest social movement in Polish history — was influenced by many factors, the decisive one being the worsening economic situation in the country. John Paul II’s first pastoral visit to his homeland in June 1979, when millions of people enthusiastically reacted to his words, made Poles realize that there is strength in numbers. The existence of small opposition groups, which issued uncensored, illegal publications (bibuła), caused an ‘awakening’ and facilitated the self-organization of workers in factories, which became the main protest centers.

John Paul II’s appeal “Let your Spirit descend and renew the face of the earth…” flared up Poles’ hopes for changing the fate of their country.

Poles against the regime

The increase in food prices introduced by the communist authorities on 1 July 1980 triggered a wave of short, spontaneous strikes, some of which lasted only a few hours. In July they were concentrated in the Lublin region. The authorities met the local workers’ demands, but the protests spread onto other centers. The Gdańsk Shipyard workers went on strike in mid-August. The Inter-Enterprise Strike Committee, established on 16 August 1980, announced 21 demands, including the right to form free trade unions, which were supported by hundreds of enterprises across Poland.

The number of enterprises in Poland which went on strike between July and September 1980 exceeded 700.

The strikes in Gdańsk, Gdynia, Sopot, Szczecin and Upper Silesia, where four agreements were signed, have remained vivid in social memory.

Apart from the Coast, the largest wave of protests in August 1980 swept across Lower and Upper Silesia. The demands put forward at that time constitute the Polish heritage of freedom.

The phenomenon of August 1980 was based on joint action. Universal solidarity enabled the exertion of effective pressure on the communist authorities. The strikers moved on from economic to social and political demands, the most important being the establishment of free trade unions, respect for basic civil rights such as freedom of association and freedom of speech, and the discontinuation of political repressions. In the summer of 1980 Poles asserted their right to freedom.

In 2003, the Inter-Enterprise Strike Committee’s demands, announced in Gdańsk on 17 August 1980, were entered into the UNESCO Memory of the World Register, which lists documentary heritage of world significance and outstanding universal value.

The agreement signed on 11 September with the Inter-Enterprise Strike Committee at the Katowice Steelworks in Dąbrowa Górnicza (known as the Katowice agreement) guaranteed the realization of the Gdańsk accord and contributed to the emergence of a free trade union movement across Poland.

The workers’ protests were supported by members of the intelligentsia, who later became the backbone of the emerging movement. “Solidarity”’s strength consisted in cooperation between workers, farmers, and intellectuals. The scale and scope of the social protest in the summer of 1980 forced the communist authorities to make concessions. 30 August saw the signing of the agreement in Szczecin, 31 August in Gdańsk, 3 September in Jastrzębie-Zdrój, and 11 September in Dąbrowa Górnicza. Seeing the scale of the strikes, the communists seemed to have succumbed, at the same time preparing to quash social resistance.

The Gdańsk agreement contributed to the establishment of truly free trade unions, independent of the communist authorities.

Freedom in the enslaved country

With the communist authorities trying to block the implementation of the Accords, representatives of strike centers from across Poland established the Independent Self-governing Trade Union “Solidarity” on 17 September 1980 in Gdańsk. Nearly 10 million people joined the movement. The 16 months of its legal operation were the harbinger of freedom for Poles. It was the only movement of this kind in the entire Eastern Bloc. It issued its own press and organized educational, academic and cultural projects. Unable to control the movement, the communists imposed Martial Law on 13 December 1981.

The “Solidarity” Trade Union was registered on 10 November 1980. A day later, on 11 November, for the first time in a few dozen years, Poles could freely celebrate the anniversary of the reinstatement of Polish independence in 1918, which was previously banned by the communists.