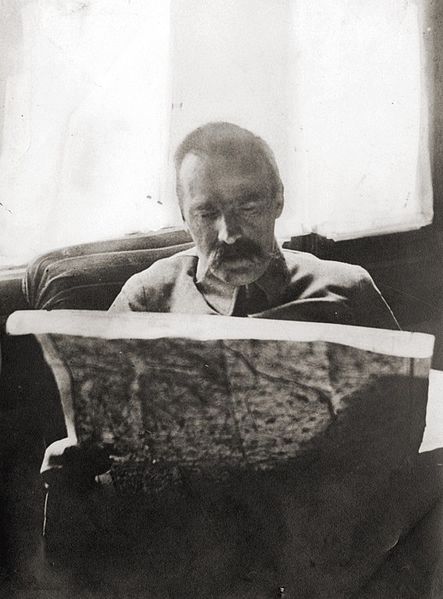 The main reason for the outbreak of the Polish-Soviet war the threat to Poland’s independence by Soviet Russia, as well as the attempt to implement the idea of a permanent revolution, and the export of the communist revolution Europe-wide. The Bolsheviks began carrying out this plan immediately after seizing power in Russia in October of 1917. They undertook the first attempts in Finland already in 1918, where civil war had broken out, as well as in the Baltic nations. In 1919 an attempt was made at provoking an uprising in Berlin, in March of the same year a government coalition was formed in Hungary with the participation communists, and in June of 1919 an attempt was made at a coup in Vienna. With the aim of transferring the revolution to other European countries, in March 1919, the Bolsheviks founded Comintern – the Third International, which was formally an independent organisation, but in practise functioned according to the guidelines of the Political Office of the communist party. One of its “branches” was the Communist Polish Workers Party (later: the Communist Party of Poland), which originated even earlier – in December 1918.

From the perspective of Poland’s independence, a highly significant issue in relations with the eastern neighbour, was determining the course of the eastern border. During this time Central Europe was occupied along the belt from the Baltic Sea to the Sea of Azov, by the German army, which only began retreating after entering into a ceasefire in Compiegne on 11 November 1918. The Soviet armies attempted to take over from them, and simultaneously installed puppet communist governments on the occupied territories. And thus, on 11 December 1918, following battles with the Polish self-defence forces, the Bolsheviks took over Minsk and, on 17 December 1918, announced the formation of the Latvian Socialist Soviet Republic and, on 1 January, the Byelorussian Socialist Soviet Republic. In January they reclaimed Vilnius from Poland and, in February 1919, formed the Lithuanian-Byelorussian Socialist Soviet Republic with its capital in Vilnius. At the turn of 1918 and 1919, the Soviet forces attacked the Ukrainian People’s Republic and, already in January of 1919, proclaimed the founding of the Ukrainian Socialist Soviet Republic with its capital in Kharkov. At the beginning of February, the Bolsheviks claimed Kiev. These actions were correctly understood by the Polish authorities as an act of aggression, and they informed the Soviet authorities of this fact.

Until even recently Polish historians were in disagreement as to when the Polish-Soviet war had actually begun. According to the commonly accepted version, the first battles had allegedly taken place in Byelorussia in February of 1919. However, as of recent times, a theory that is becoming growingly popular states that the war began on 3 January 1919, when the Bolsheviks attacked Vilnius. Thus, on 29 December 1919, the Vilnius Self-Defence was dissolved, and its detachments incorporated into the ranks of the Polish Army. Also for this reason the battles for Vilnius, which began on 3 January, already had the character of Polish-Soviet battles.

Following unsuccessful attempts at Polish-Soviet negotiations, the Polish offensive began in mid-April 1919 and was led toward the north (with the aim of reclaiming Vilnius and Maladzyechna), as well as toward Volyn, and ended in success. A highly significant role in the course of the Polish-Soviet war was played by the Polish radio intelligence. In September 1919 the Polish intelligence broke the first Bolshevik codes, and the following stage took place near the end of 1919. From that time, the Biuro Szyfrów (Cipher Bureau) was quickly able to decipher Soviet telegrams. From this source, the Polish side acquired information concerning the concentration of Soviet armies in February 1920 on the Polish front. In turn in 1920 the radio enabled gathering information on the concentration of Soviet armies during the Masyr operation. Somewhat later information was acquired the same way on the concentration of armies in the Ukraine.

Military actions were suspended in September and undertaken anew in the latter half of October 1919. They resulted in the shifting of the front to the east in Volyn and conquering Dyneburg in January of 1920. Battles recommenced in early March 1920 when the Polish armies conquered the Masyr region. At the same time, in March and April of 1920, the Polish side was engaged in negotiations with the leader of the Ukrainian People’s Republic, hetman Symon Petliura, which ended on 21 April with the signing of a political and military agreement, and the subsequent mutual attack in the direction of Kiev (known as the Kiev expedition), which began on 25 April 1920. On 7 May 1920 the Polish and Ukrainian armies occupied Kiev but did not enter into contacts with the enemy. Very quickly, already on 14 May, the Soviet forces moved to counterattack in the north (Byelorussia) and south (Ukraine). Only the first of these could be stopped. The Polish armies in the Ukraine were retreating. During the subsequent offensive in the north, the Bolsheviks broke the resistance in the fortresses in Grodno and Brest and, at the turn of July and August 1920, battles were already taking place along the line of the Bug and Narva rivers. The situation was threatening to Poland to the degree that then Prime Minister Władysław Grabski entered into negotiations during the conference in Spa on 9 July 1920, the goal of which was to gain the support of Western European nations. A consequence of the unfavourable obligations that Grabski negotiated in Spa (predominantly the acceptance of the adverse course of Poland’s eastern border known as “Curzon’s line”) was the dismissal of his government and the formation of the Government of National Defence led by Wincenty Witos. The international situation was quite adverse for Poland: Great Britain was seeking to force the country into signing a peace treaty with the Soviets at any price, Czechoslovakia refused to allow for the transit of transports with weaponry and ammunition, and the communist-influenced British and Gdańsk dockworkers hindered and delayed the loading and unloading of military materials. Poland only received concrete support in weaponry and ammunition from France and Hungary. Poland’s adversaries attempted to take advantage of the difficult situation on the eastern front both in Warmia, Masuria and Powiśle, where an unfavourable referendum was carried out in July, as well as Upper Silesia, where German activities led to the outbreak of the II Silesian Uprising on the night of 19-20 August 1920.

A very active propaganda campaign was developing on the lands conquered by the Soviets. On 23 July 1920 the Bolsheviks formed what was known as the Provisional Polish Revolutionary Committee, comprising of Polish communists, officials of the Polish KC WKP/b Bureau. In the manifesto issued on 1 August, the Committee announced the formation of the Polish Socialist Soviet Republic, and began forming “revolutionary committees” on the occupied lands.

Meanwhile decisive battles with the Bolsheviks took place in mid-August 1920 close to Warsaw. The Polish attack was prepared based on plans elaborated at the Headquarters under the direction of Gen. Tadeusza Rozwadowski, and accepted by the Commander in Chief J. Piłsudski. The battle took place on the vast territory spanning from the Vistula in the east to the Działdowo-Włodawa line in the north, lasted approx. 10 days, and comprised three stages: battles on the outskirts of Warsaw, the attack by the Wkra (14 August), and the counterattacks from the Wieprz (16 August). This battle, referred to as the “Miracle-on-the-Vistula” was  deemed to be the 18th most important battle on a global scale, and stopped the approach of the Soviet armies into Western Europe. Aside from the Battle of Warsaw, the largest conflicts took place at the turn of August and September near Zamość, and subsequently in September, by the Niemen River.

Military operations ended on 12 October 1920 with the signing of the ceasefire. Negotiations over the signing of the peace treaty lasted from 21 September in Riga and were finalised on 18 March of 1921. A consequence of this was, above all, the defining of Poland’s eastern border, which more or less covered the border of the second partition, with insignificant amendments to Poland’s benefit (in Volyn and Polesie). Poland received barely ¼ of the lands to which it had made claims during the peace negotiations (3,000 km2 instead of 12,000 km2). Large areas inhabited by Poles (including the Minsk region) remained outside of Poland’s borders. Furthermore, the Soviet side undertook to return stolen cultural assets and pay due compensation. The Treaty of Riga also regulated the issue of the return of Poles who, as a result of the movement of people during World War I, found themselves in Russia. In turn the Polish authorities took onto themselves the responsibility of ceasing to support any anti-Soviet organisations or formations. This resulted in the internment of any allied Russian (B. Sawinkov) and Ukrainian armies (S. Petliura). Historians also believe that the signing of the Treaty of Riga signified the ultimate resignation from any of Piłsudski’s federation plans.

There is no doubt that the Polish-Soviet war and Poland’s victory quashed any plans for the Sovietisation of Central and Western Europe. This was common knowledge to the military and civil elites of those European nations who defined the Battle of Warsaw as the 18th decisive battle of the world (Lord d’Abernon), and compared its significance to the Battle of Vienna 1683 (Gen. L. Faury).