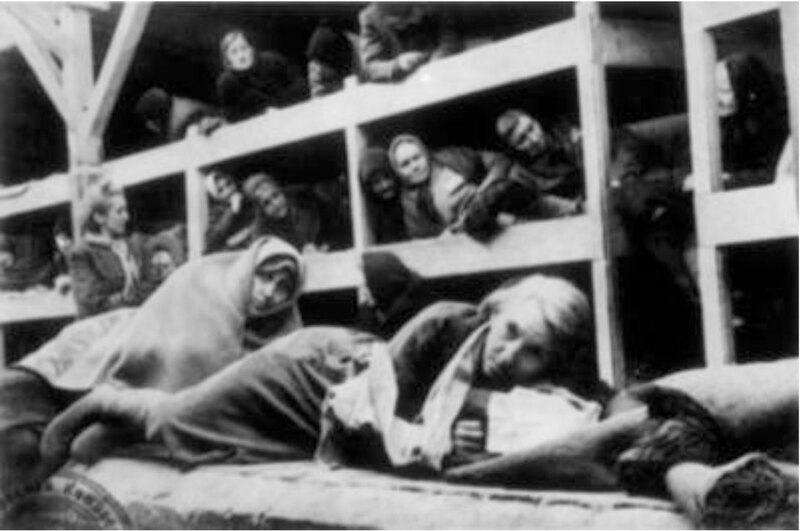 “The only exit from here leads through the crematorium chimney” – this is what the first Polish prisoners of Auschwitz heard from the SS camp Deputy Commander Hauptsturmführer Karl Fritzsch in June 1940. Upon their arrival, a carefully thought-out and directed “welcoming” ceremony awaited the prisoners. It was intended to instill in them a sense of total abandonment and helplessness.

The unloading of prisoners from the wagons was merely the beginning of the physical and mental suffering awaiting them: “There was probably no prisoner who managed to avoid a beating at the time,” Longin Grys recalled. Next, their ties with the past were broken by depriving the prisoners of personal belongings. They were ushered to a building, where they were subjected to bathing and disinfection. Their hair was shaved off. Each prisoner was assigned a camp number and a red triangle – the symbol of a political prisoner. The following day, the “initial quarantine” period began. Newcomers were to understand that from this point on, they ceased to be human beings in the traditional sense of the word.

After the initiation period, the personnel took every opportunity to remind the prisoners that they had found themselves in a completely new reality. The goal was to break their spirits and drain them physically. “On the SS-man’s command we had to march, run, do frog jumps, duck walks, etc.,” reported Bogumił Antoniewicz. These punitive exercises, which practically every prisoner had to go through under the pretext of learning the drill, were ironically called “sport”. “The temperature reached 30 ° C at that time. As a result of the heat, our heads swelled and we were incredibly thirsty,” Bronisław Cynkar recalled.

In July 1940, the prisoners were transferred from the quarantine building to the actual camp. There, they were faced with the unimaginable brutality of everyday life. “The SS-men came in at night, they beat us and fired shots at the ceiling” – from this and many other accounts of Auschwitz survivors, we know that only in theory was sleep a time of rest. In the first period of the camp's operation, the prisoners slept on the floor, on pallets spread out in three rows, or on straw. Crowding, lack of intimacy and dirt were ever present in their daily lives.

“The hardest work was lighter than sport,” the first newcomers recalled. In the camp, work also served as a method of humiliating and physically draining the prisoners. “We had to carry water in 50-liter cauldrons,” reported Bogumił Antoniewicz. “They were extremely heavy and difficult to carry, especially since we had to run rather than walk.” At that time, the use of slave labor in the camp for the benefit of the German war economy was not yet a priority.

“For dinner we would usually get a bite of bread and so-called Zulaga. It could have been a piece of smelly sausage, a scoop of beetroot marmalade or a piece of cheese with some sort of insects walking all over it. We would remove the bugs, and eat the cheese”, said Józef Paczyński, recalling the first meals he received. Hard labor and insufficient nutrition were the reason for the systematic destruction of the body, which gradually used up its supplies of fat, muscle protein, as well as internal organ tissue. This led to severe emaciation and starvation sickness, which resulted in a significant number of deaths. The first prisoners showing symptoms of apathy, indifference and a lack of the will to live appeared in the camp as early as July 1940 –  they were referred to as “Musselman” ("Muslims"). These people quickly died of physical and mental exhaustion.

In addition, diseases, which would normally not pose any threat to the prisoners outside the camp, were lethally dangerous. The smallest wound or cut could become the direct cause of a prisoner's death. In this context, it is worth mentioning that beating was an integral part of the inmates’ day. Prisoners were also subjected to flogging, the so-called "post" punishment, imprisonment in the camp jail or assignment to a penal company, which for many was tantamount to a death sentence.

Shaved heads and the scorching sun

Prolonged roll calls were one of the most severe methods of daily harassment in concentration camps. They took place regardless of rain, wind, snowstorms or frost. The prisoners had to stand still in line, freezing or getting drenched. The first and longest penal roll call, lasting for hours on end, took place in Auschwitz on 6 July 1940, in connection with the escape of one of the prisoners – Tadeusz Wiejowski. “We heard the camp siren for the first time (...). SS-men on their motor bikes, accompanied by dogs, raided the area,” the Polish prisoners recalled years later.

The roll call lasted from 6 p.m. to 2 p.m. the following day. As a form of punishment, the prisoners had to stand at attention or squat: “Many prisoners fainted, some had nervous breakdowns.” The slightest movement resulted in being beaten by SS-men and kapos. “At one point I irritated the SS-man guarding us,” said Nikodem Pieszczoch, “ he ordered me to roll and do frog jumps and finally asked – Ist dir warm? (Are you warm?) –  to which, to the SS-man's surprise, I answered – Jawohl, danke! (Yes, thank you!).”

A beating stool was placed in front of block No. 1. The interrogation on the escape began: “The only sound to be heard was the sound of the whipping. Of course, it took merely a few lashes for the blood to appear gushing through one’s pants (...) Horrendous screams were coming from the beating zone. Suddenly one of the SS-men slipped on the blood surrounding the stool and shouted: – Verfluchtes polnisches Blut! (Damn Polish blood!),”  the prisoners recalled.

The SS-men and functionaries continued to take their anger out on the prisoners. Buckets of water were poured on those who fainted. After regaining consciousness, they were forced to continue the roll call. Many prisoners suffered from sunstroke. “An additional torture for us was the inability to meet our basic physiological needs (...) I remember that (one of the prisoners – RG) defecated into a small bag. The SS-men ordered him to bark at this bag, and later to hold it between his teeth,” Bronisław Cynkar said.  “It was a gruesome and humiliating sight for us.” The roll call ended in the afternoon of 7 July. “When we were allowed to go back to our blocks, the prisoners crawled rather than walked.”

Days and weeks passed by…

In the following months the fury of the functionaries and SS-men still focused on the prisoners of the first transports. By the spring of 1941, about a third of the people from the Tarnów transport had died. One of the survivors, Tadeusz Krupiński, recalled that “German kapos, as ‘veterans’ of Nazi labor camps, ironically and brutally reminded us that the first three years in the camp were the most difficult.”

Auschwitz, and other concentration camps, were places where concepts, attitudes and values prevailing in the external world were turned completely upside down. The sick and the elderly were the first to die. The young, healthy individuals who were fit for work were allowed to stay alive, but only for a limited amount of time. It was not until 1942, with the ongoing war in the east, that the authorities of the Third Reich began to treat prisoners as a valuable workforce for the German war industry.

During this period, the camp changed its function and became one of the German centers of immediate and direct extermination of the Jewish population. At KL Auschwitz-Birkenau, the Germans killed at least 1.1 million people, including about 960,000 Jews, 70–75,000 Poles, 21,000 Roma and Sinti, 15,000 Soviet prisoners of war and 10-15,000 prisoners of other nationalities.