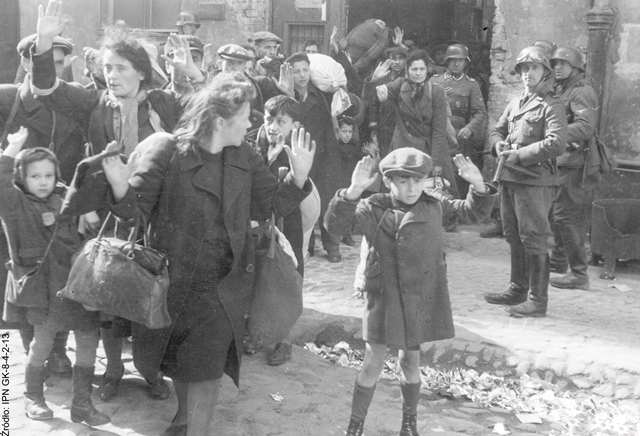 You must recall the iconic photo of a small Jewish boy standing in a group of terrified people, arms raised, in front of the barrels of German rifles. This photograph, taken from the Report by SS-Gruppenführer Jürgen Stroop, who commanded German forces suppressing the Warsaw Ghetto Uprising, became a symbol of German crimes against the inhabitants of this closed Jewish district in Warsaw.

Stroop's "report", drafted especially for Heinrich Himmler, was to testify to the author's bravery and to emphasize his merits to the Millennium German Reich. In recognition of his service to the German criminal system, Stroop received military promotion and numerous awards. Contrary to the intentions of the executioner of the Warsaw Ghetto, his "Report" also served as evidence in trials before courts and tribunals in Nuremberg and Warsaw. Stroop was hanged on 6 March 1952 in the Mokotów prison in Warsaw.

The report includes several dozen photographs documenting the German campaign aimed at quenching insurgent resistance in the ghetto, and showing the drama of its inhabitants - people doomed to extermination and undertaking a hopeless fight for a dignified death. All photos are in the possession of  the Archive of the Institute of National Remembrance, and are available in an electronic version, alongside with the entire document, at the Institute's digital library.