The exhibition depicts the lives of children from the interwar period to the end of World War II. Brutally interrupted by war and occupation, their childhood left a huge trauma in their lives. The exhibition talks about the choices between being a victim, a passive observer and a defender. 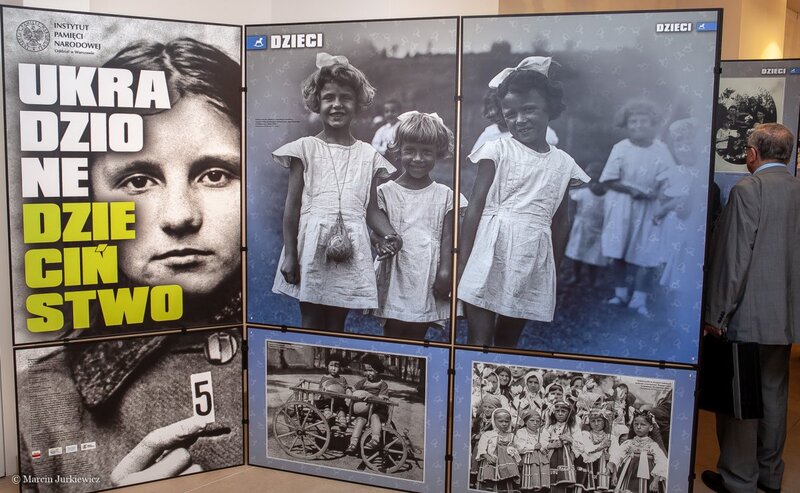 The exhibition, prepared by the Warsaw Branch of the Institute of National Remembrance, shows the lives of children from the interwar period to the end of World War II. It shows what their life was like and how it changed during the war. The childhood period, which was brutally interrupted by the terrorist policy pursued by the occupiers, left a huge trauma in their lives. The exhibition refers to the fate of children from various national minorities, including: Jews, Roma, Ukrainians, Belarusians, Poleshuks, Karaites, Armenians, Hutsuls, as well as traumatic experiences related to the ghetto, the camp, forced labour, deportations, executions, etc.

It is divided into seven parts that depict children in various life roles:

Childhood is usually the most beautiful period in human life. It is full of hope, trust, carefree fun and love. This is when you build your own identity, discover the beauty and diversity of the world, define and consolidate moral attitudes for life, learn altruism.

The world of these sensations was present in the life of the young generation - born and raised in Poland, which had regained its independence after 123 years.

In 1939, the outbreak of war meant that this world ceased to exist - it was replaced by terror, unparalleled cruelty, and daily death testimonies. Did the young people have any choice in this alien world? Or were they just passive witnesses of the ever-present murder? Could they afford to demonstrate heroic attitudes - saving the remains of humanism and their own childhood?

The exhibition presented here talks about the choices between being a victim, a passive observer and a defender.

The story of childhood "stolen" from Polish children does not end in 1945 - the survivors of the conflagration, who were physically and mentally mutilated, infected next generations of Poles with their horrifying memories, transferring the trauma of war to modern times. Are we not unconsciously transmitting this trauma? Unfortunately, this has remained a valid question for each of us.