Collective edition, Warsaw-Kiev 2009 The book is the English version of the volume of publication series "Poland and Ukraine in the 1930s and 1940s of the twentieth century."

The book is the English version of the volume of publication series "Poland and Ukraine in the 1930s  and 1940s of the twentieth century." The main purpose of the publication is to present previously unpublished documents from the National Archives of Ukrainian Security Service, State Archives of Ukraine, the Central Military Archives (CAW) and the Archives of New Acts (AAN) regarding the tragedy of famine in Soviet Ukraine in the first half of the thirties, and the reaction of the Ukrainian minority in the Second Polish Republic on the incoming from the eastern border information. These documents were produced by the Soviet secret services (OGPU / NKVD), the apparatus of the Communist Party and the Polish intelligence (General Staff’s Section II), the National Police and the Polish state administration (Provincial Departments of the Security Offices).

The publication contains 230 documents. As many as 133 documents come from the Ukrainian Security Services archives in Kiev, Odessa, Sumy, Donetsk, Dnepropetrovsk, Nikolaev, and Khmelnitsky. These are documents produced by the OGPU (later NKVD) and regard the problems of collectivization, famine and the surveillance of diplomatic posts on the territory covered by famine. Subsequent documents were found in peripheral State Archives in Ivano-Frankivsk, Ternopil, Lutsk, and in the Central State Historical Archive of Ukraine in Lviv. These documents were produced by the Polish administration in the south-eastern provinces of the Second Polish Republic and the State Police authorities. The third group of archival material used in this work are documents from the Archives of New Records and the Central Military Archives in Warsaw. These are materials produced by the Polish diplomatic agencies and the residents of Polish intelligence. A chronological arrangement is used in the volume. The publication also contains indexes and an illustrative pull-out. 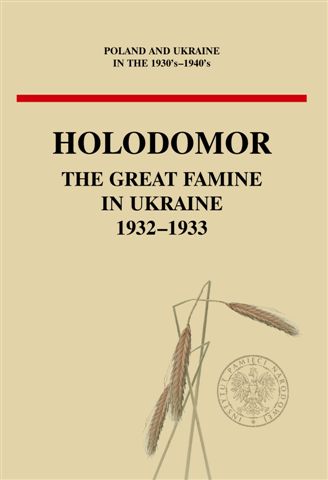