Hungarians towards the German aggression on Poland

Despite the pressure of Berlin the Kingdom of Hungary did not contribute to the German aggression on Poland in September 1939, but rather later secretly supported the evacuation of Polish soldiers to France. 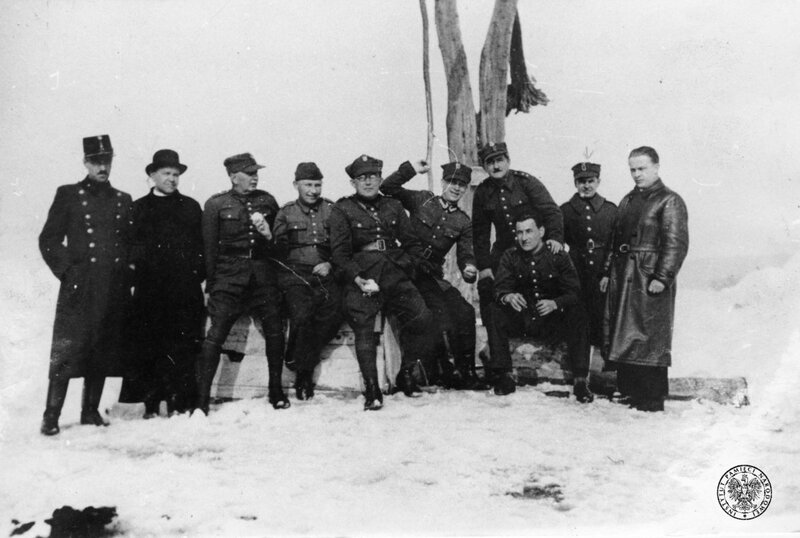 And back at you

Dear sirs Poles, of any impairment,

Of the alliance found upon the blessings

Of the holy patrons of both kingdoms,

And respected for eternity: beware, so you would not

Bring upon them the wrath of God

And His anointed saints, and tragedy upon

It is not befitting for a neighbour to fight his neighbour.

Indeed, both sides should

In sincerity and faith seek to help one another,

And stand united to meet both good fortune

And enemy side by side.

The quoted text of an unknown author from the 14th century includes an idea which has been realised by both nations – Polish and Hungarian – during their thousand-year-old history with mutual profit. Moreover, the conviction of mutual friendship was so strong that it also found its way to folk culture. Already in the inter-war period a legend circulated among the Polish and Hungarian highlanders that the border between the two countries was set by saint Wojciech and saint Stefan at the waters of the Beskid mountains, which could not be broken under the threat of God’s punishment, and anyone who would damage the good neighbourly relations and the eternal peace would be damned in the afterlife.

“We shall never turn our weapons against Poland!”

As a result of the peace treaties after the First World War Hungary lost two thirds of its territory and more than 3 million Hungarians were forced to live outside the borders of their country. The hurt state tipped towards the German Reich, hoping to revise the borders, reclaim its historical lands and its strong position in the European world. The gratification for its alliance with Adolf Hitler was the including of southern Slovakia and southern Carpathian Ruthenia, where Hungarians were the majority of the population, to the Hungarian Kingdom in November 1938. In March 1939, with the permission of Germany which was annexing Czechoslovakia, Hungary invaded the remaining territories of Carpathian Ruthenia. As a result of these actions, the Polish-Hungarian border was established, which was very similar to the historical border between the two states. Even though Poland and Hungary were in opposite alliances, the relations between the two countries remained friendly. During the inter-war period Poland never stood against its brothers: it did not sign the Trianon Treaty from 1920, which was unfavourable for Hungary, and it did not join the anti-Hungarian Small Entente, founded by Romania, Yugoslavia and Czechoslovakia. Meanwhile, Hungary supported Poland in 1920 with deliveries of weapons and ammunitions for its war against the Bolsheviks.

It was in Hungary’s best interest to support the Third Reich and Hitler’s expansion policies, but it drew the line at the moral duties towards Poland. It is perhaps the only example in international politics where the government of one nation not only talked about moral aspects in international relations, but also took these moral duties into real consideration. Knowing that the Germans would break the non-violence agreement with Poland, the Hungarian minister of foreign affairs István Csáky sent a telegram to the ambassador in Rome on April 27th:

We will not be directly fighting against Poles, because it would be impossible due to our internal politics, and what’s more, our moral conviction tells us not to. On the other hand, the Germans cannot say that we did not support them. […] However, if we allowed the Germans to enter our country without a single word of opposition or even with eventual resistance, so they could fight against Poland from the Hungarian territories, we would have a revolution on our hands and such moral apathy that, losing faith in ourselves, we would end up in a much worst situation than the German-supported Slovaks.

Csáky also assured the Polish representative in Budapest, ambassador Leon Orłowski, that Hungary would never fight against Poland. Hitler was also informed by the prime minister of Hungary Pál Teleki about the standpoint of his government on the German plans to invade Poland:

“I am pleased to inform Your Highness, that Hungary, if there is no drastic change in the  current circumstances, for moral reasons sees no possibility of an armed aggression on Poland.

The moral aspect was emphasized many times after that in diplomatic correspondence, also the one addressed to Italy – Hitler’s ally in the Axis. In a letter to Benito Mussolini from July 27th 1939, Csáky informed:

It is an undeniable goal of the Hungarian government to prove our undoubted and open friendship with the countries of the Axis. […] So far, the Polish government, both towards the western states and Romania, did everything to protect the most important Hungarian interests towards Romania. Italy would be the first state to, knowing about that, condemn our ungratefulness […]. Given all this, we especially do not understand the eventual doubts regarding our loyalty, since both Italy and Germany always knew that we would never conduct any warfare against Poland.