Poles against the Kaiser. Fighting of the White Legions at the Russian front between 1915-1917

The fighting of the Polish soldiers on the battlefields of the First World War alongside countries of the Entente are little known today. Few people realise that even before the 100,000-strong Blue Army of General Haller was created, the First Polish Legion had marched to fight against the Germans in 1915. The said unit, formed in Warsaw and Puławy (hence often called Puławski), became the seed that bloomed into several Polish military formations in Russia, which in 1918 counted over 50,000 men. 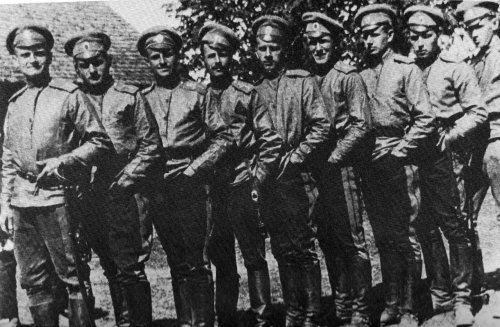 The volunteers from the Puławski Legion, even though having worn Russian uniforms, were fully-fledged Polish patriots and their goal, as they declared, was the fight for a united Homeland, free from the three occupiers. Their leftist political opponents accused them of “Moskalophilia”, “serving the Tsarist autocracy” and… wearing the Tsarist distinctions. These accusations were thrown by those who, at the same time, supported Germany by creating their own legions at Galicia in alliance with Vienna and Berlin. They themselves were often decorated with the German Iron Crosses which they wore on their uniforms and saw nothing wrong in it.

The Polish formations in Russia, contrary to the Galician legions, did not have an easy start: soldiers with no earlier training had to get experience in battle paying for it with blood. They had to deal with the lack of supplies and trust from the Russian military. The Legionnaires were forbidden from using their national symbols, and many Russian commanders did not acknowledge the Polish character of the formation, calling it not a “Polish” one but a “Polesh” one. Nonetheless, the Legionnaires remained in the army’s ranks believing that out of the two evils the Germans were the bigger threat to the Polish cause.

White Legions, so not “red”

The White Legions, since this is how the Puławski Legion was commonly referred to, already in 1914, in contrast to the “red” legions of Piłsudski – had some luck in terms of the commanding cadres. The officers assigned to them, mostly professional soldiers of the Tsarist army of Polish origin, turned out to be not only Polish patriots but also good tacticians and did not fail even in the most difficult of situations. Among them, were those who later became exceptional commanders of the Polish Army: Jan Rządkowski – the founder of the Lithuanian-Belarussian Division or Lucjan Żeglikowski, who retook Vilnius in 1920.

The Legionnaires went through a true blood bath while fighting against the Germans during the 1915 campaign. Their baptism of fire took place on May 20th 1915, near Pakosław, during a night attack on the German positions. It was a small Lenino of the First World War. The Russian regiments which were supposed to give support to the Poles did not leave their trenches, and the Puławski Legion took heavy casualties in a bloody fight against the overwhelming forces of the enemy, ending up with more than 100 dead and wounded. No more than a month later, on June 16th, they took their revenge on the Germans near Michałów, inflicting heavy losses on them. Then came the next battles, in which Poles mainly covered the retreat of the Russian forces from Congress Poland. By the end of the summer, a little over a hundred soldiers remained from the unit originally counting a thousand Poles.