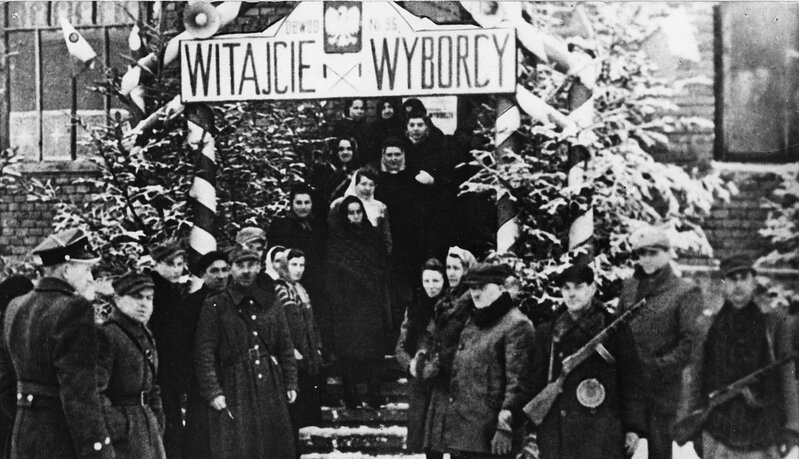 70 years ago, on 19 anuary 1947, elections to the Legislative Seym were held in Poland, which were falsified by the communists. The leaders of the three allied powers - Great Britain, the United States and the Soviet Union - obliged the Polish authorities to carry them out during a conference held on February 4-11, 1945 in Yalta, Crimea. The agreement, signed at that time by Winston Churchill, Franklin Delano Roosevelt and Joseph Stalin, provided for "free and unfettered elections as soon as possible" in which "all democratic and anti-Nazi parties will have the right to participate and put forward candidates".

The communists of the Polish Workers' Party, fearing the results of the elections, postponed the implementation of this commitment to a later date. Together with the Polish Socialist Party, the People's Party and the Democratic Party, they formed an electoral coalition under the name of the Block of Democratic Parties, with which the Polish People's Party "New Liberation" and the Labour Party, initially opposed to the communists, also cooperated. The number of opposition groups allowed to operate legally was limited to the Polish People's Party. The initial actions of the activists of the Polish Workers' Party were aimed at introducing the Polish People's Party into the Block and determining, before the elections, the number of seats allocated to individual political parties in the next Seym, which in fact would mean turning the election into a plebiscite of support for the coalition. However, the party led by Stanisław Mikołajczyk refused to join the "blocked parties". In this situation, the communists began the final crackdown with the largest opposition party in the country, which soon became a nationwide, cross-class group.

A test of the popularity of communists in society, a kind of election test, was the people's referendum on June 30, 1946. In fact, the referendum, the results of which were falsified by the communists with the active support of the Soviets (at the request of Bolesław Bierut, Colonel Aron Palkin, the head of the Independent Department "D" in the Ministry of State Security of the USSR, specializing in the forging of documents, was brought in to Poland), postponed the election to the Legislative Seym. The communists and their allies used this period to fight against the Polish People's Party and the armed independence underground movement. The referendum was also an excellent opportunity to test methods of falsifying voting results.

Elections to the Seym were fixed by the Polish National Council, a quasi-parliament of the People's Republic of Poland, at the beginning of 1947. In September 1946, the Polish National Council adopted the electoral ordinance, which provided for a five-adjective voting: universal, secret, equal, direct and proportional. 372 deputies were elected in 52 constituencies, and another 72 were to come from state lists. The division into 52 constituencies violated the principle of equality, as it discriminated against voters from central and eastern Poland at the expense of voters from the so-called recovered lands. Every citizen of the Republic of Poland who turned 21 on the day of the election was entitled to vote, however, in accordance with Article 2 of the Ordinance, persons deprived of legal capacity and public rights, entered on the German nationality list (if not rehabilitated), collaborating with the German occupier, as well as "persons cooperating with underground fascist organizations or bands [the armed underground - editorial note], seeking to overthrow the democratic system of the state" could be removed from the election lists. The Communists made extensive use of this article, spreading fear among voters.

The election campaign conducted by the Democratic Party Block, dominated by the Polish Workers' Party, was aimed at the Polish People's Party from the very beginning. Communists, using the widely understood apparatus of repression (the Security Office, the Citizens' Militia, the Volunteer Reserve of the Citizens' Militia, the Internal Security Corps, the "people's" Polish Army) terrorized and intimidated their political adversaries. For public money, which was beyond any social control, they organized numerous rallies and election meetings, distributed the press and propaganda materials (posters, leaflets, appeals). They also used the military to spread propaganda. At the end of 1946, protection and propaganda groups were established, consisting of soldiers of the "people's" Polish Army and the Internal Security Corps, whose task was to protect rallies and pre-election meetings, spread propaganda among the local community and intimidate the population, as well as force them to openly and demonstratively vote for the Block. While conducting the election campaign, the communists accused the Polish People's Party's activists of cooperation with the German occupier or breaking up the people's movement.

Coordinated actions aimed at politicians and activists of the Polish People's Party and the armed independence underground movement were conducted by the State Security Commission, headed by the Minister of National Defence, General Michał Rola-Żymierski; it was also composed of the Minister of Public Security Stanisław Radkiewicz, the Chief Commander of the Citizens' Militia - General Franciszek Jóźwiak, the Commander of the Internal Security Corps - General Bolesław Kieniewicz. On charges of illegal possession of weapons, cooperation with the German occupier, or supporting the armed underground movement, throughout the country there arrested nearly 2,000 activists and supporters of the party (including over 150 candidates for deputies), however, many people were not levelled with any charges (preventive detention). The population was intimidated and terrorized by officers of the Security Office and the Citizens' Militia as well as the Polish People's Party's activists who, together with security services and militiamen, formed secret militias. They broke up the Polish People's Party's rallies, attacked the party's premises, intimidated peasant activists, and even committed severe beatings and assassinations. Until the elections, the communists murdered about 150 people. Among the victims were not only rank-and-file activists and supporters of the party, but also members of the local leadership and candidates for deputies to the Legislative Seym.