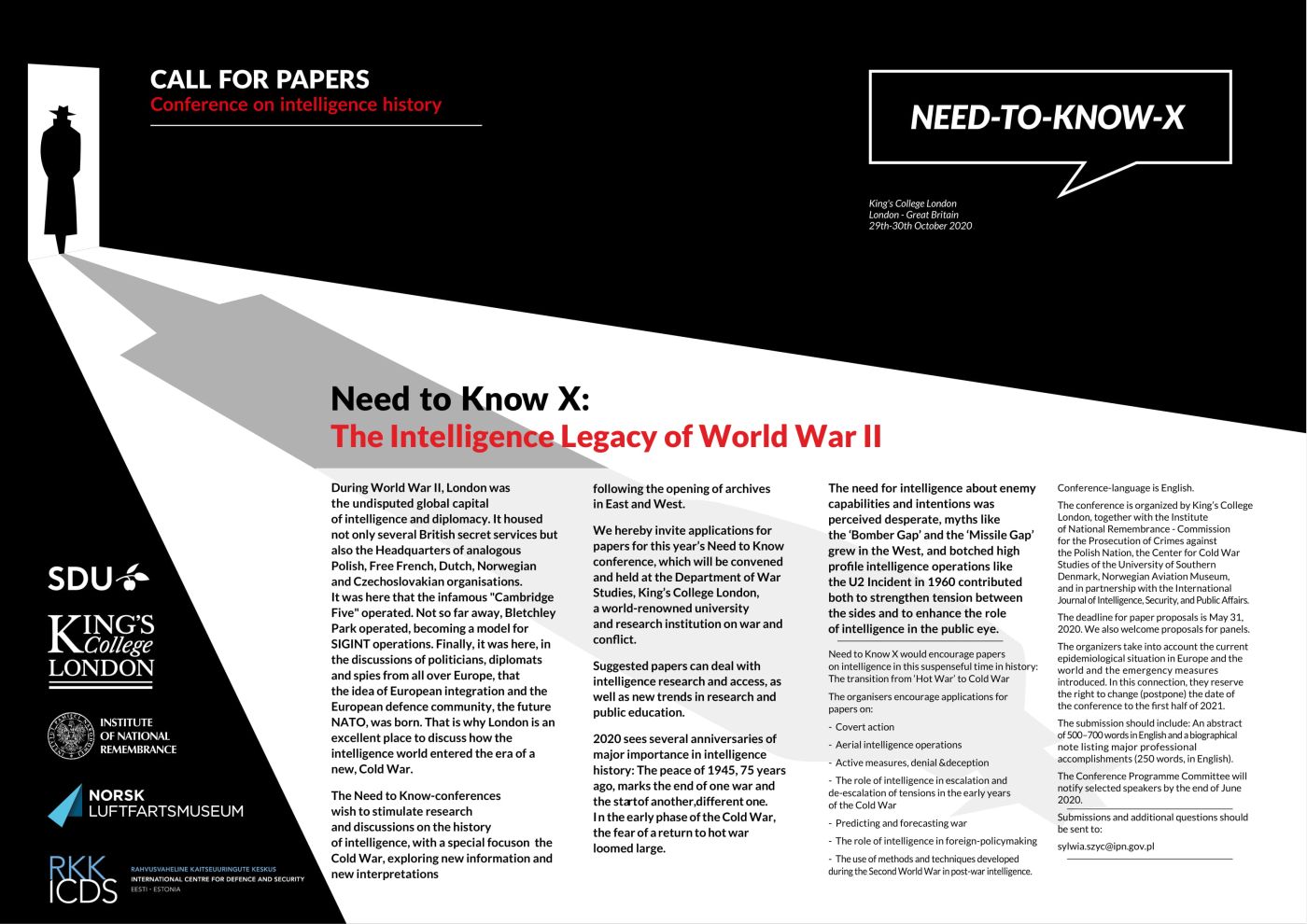 During World War II, London was the undisputed global capital of intelligence and diplomacy. It housed not only several British secret services but also the Headquarters of analogous Polish, Free French, Dutch, Norwegian and Czechoslovakian organisations.  It was here that the infamous "Cambridge Five" operated. Not so far away, Bletchley Park operated, becoming a model for SIGINT operations. Finally, it was here, in the discussions of politicians, diplomats and spies from all over Europe, that the idea of European integration and the European defence community, the future NATO, was born. That is why London is an excellent place to discuss how the intelligence world entered the era of a new, Cold War.

The Need to Know-conferences wish to stimulate research and discussions on the history of intelligence, with a special focus on the Cold War, exploring new information and new interpretations following the opening of archives in East and West.

We hereby invite applications for papers for this year’s Need to Know conference, which will be convened and held at the Department of War Studies, King’s College London, a world-renowned university and research institution on war and conflict.

Suggested papers can deal with intelligence research and access, as well as new trends in research and public education.

2020 sees several anniversaries of major importance in intelligence history: The peace of 1945, 75 years ago, marks the end of one war and the start of another, different one. In the early phase of the Cold War, the fear of a return to hot war loomed large. The need for intelligence about enemy capabilities and intentions was perceived desperate, myths like the ‘Bomber Gap’ and the ‘Missile Gap’ grew in the West, and botched high profile intelligence operations like the U2 Incident in 1960 contributed both to strengthen tension between the sides and to enhance the role of intelligence in the public eye.

Need to Know X would encourage papers on intelligence in this suspenseful time in history: The transition from ‘Hot War’ to Cold War

The organisers encourage applications for papers on:

The conference is organized by King’s College London, together with the Institute of National Remembrance - Commission for the Prosecution of Crimes against the Polish Nation, the Center for Cold War Studies of the University of Southern Denmark, Norwegian Aviation Museum, and in partnership with the International Journal of Intelligence, Security, and Public Affairs.

The deadline for paper proposals is May 31, 2020.  We also welcome proposals for panels.

The organizers take into account the current epidemiological situation in Europe and the world and the emergency measures introduced. In this connection, they reserve the right to change (postpone) the date of the conference to the first half of 2021.

The submission should include: An abstract of 500–700 words in English and a biographical note listing major professional accomplishments (250 words, in English).

The Conference Programme Committee will notify selected speakers by the end of June 2020.

Submissions and additional questions should be sent to: sylwia.szyc@ipn.gov.pl