Enveloped by the opening of "The Image of Treblinka in the Eyes of Samuel Willenberg" exhibition in January 2020 and its Polish display in Wrocław this week has been a 30-month enterprise to which Ada Krystyna Willenberg is central. 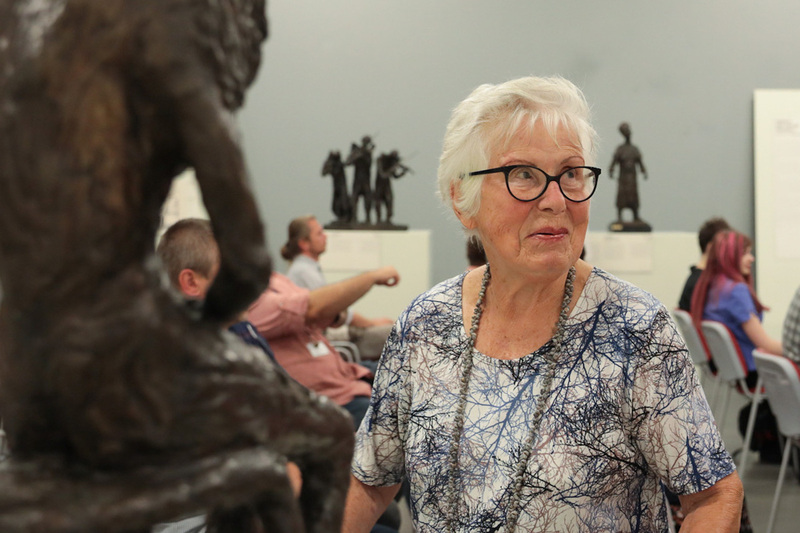 The enterprise has been the Holocaust education.

Ada Willenberg is the artist’s widow; 80 years ago, she was just a 14-year-old ghetto escapee Ada Lubelczyk, who found shelter in Warsaw, in the home of one Helena Majewska. Mrs. Willenberg recounted it in the IPN-produced documentary.

That war left no one unscathed.

Helena Majewska would get the Righteous medal one day, but lose her husband in a German concentration camp. Ada’s father, impressed into the Red Army, perished on the German-Soviet frontline, and her mother died in Treblinka gas chambers.

She stayed with the Majewskis until the Warsaw Uprising; caught by the Germans, who did not know she was Jewish, she was deported for slave labor in the Reich, but after the war returned to Warsaw. She met there other survivors, one of them very special.

Special enough to marry him.

His name was Samuel Willenberg – a deportee from the Częstochowa ghetto to German death camp of Treblinka, then Treblinka survivor and Warsaw Uprising participant – which he recounted in the WLRN documentary that accompanies the IPN project.

He too experienced the Holocaust first hand.

The couple moved to Israel, and devoted years to educating the world about the German extermination of Jews – through the sculptures Samuel translated his Treblinka experiences into, and many eye-opening trips to Poland they took Israeli youth on.

In 2020, their mission received serious boost.

Samuel had passed away by then, but the message conveyed in his sculptures of Treblinka scenes remained as powerful as ever – and the IPN international relations team, sensing that power, decided to use them as a vehicle for an educational campaign.

Mrs. Willenberg was happy to go along.

Not only did she get involved in the project preparations every step of the way, but served as an educator and guide for scores of young people who came to see her late husband’s art. Hardly any teacher can arrest the classroom’s attention so totally.

She was a guest of honor at the project launch and end.

Not as the artist’s wife but as someone whose input was absolutely invaluable in making "The Image of Treblinka in the Eyes of Samuel Willenberg" and its paraphernalia – films, virtual tours, workshops – what they are today: deeply moving history lesson.

Soon, this lesson will be heading abroad.

It will go to German concentration camp museums and memory sites, and then visit more countries and touch more people. What Samuel Willenberg conveyed in art, Mrs. Willenberg and the IPN conveyed in a history project, as good as they come.