Celebrations of the 60th anniversary of the Polish Community Council of Victoria - Melbourne, Australia, 19 June

The IPN President Karol Nawrocki, Ph.D. issued a congratulatory letter to Elżbieta Dziedzic, the Council President, and all the participants of the event. 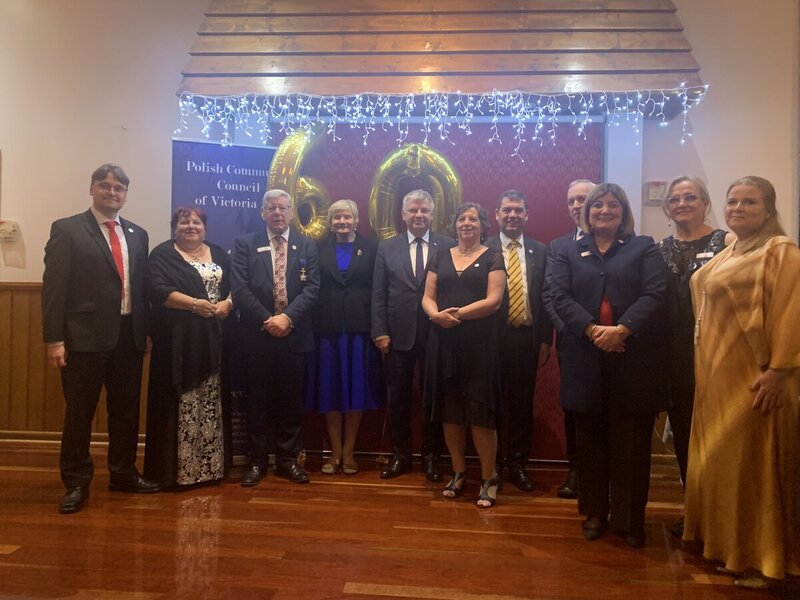 The Polish Community Council of Victoria Inc. was established in 1962 as the state’s  federation of Victoria’s Polish associations, organisations and individual groups of Polish migrants. The Council represents the concerns, needs, aspirations, achievements and interests of the Polish community of Victoria. Its constituency comprises over 40 Polish regional and special interest associations.

On the occassion of the 60th anniversary, a concert was held in Alexander Theatre. It was attended by representatives of Polish state: senator Jarosław Rusiecki, senator Bogdan Zdrojewski, and Monika Kończyk, Consul General in Sydney. Małgorzata Kwiatkowska, President of the Polish Community Council in Australia was also present.

The IPN President Karol Nawrocki, Ph.D. issued a congratulatory letter to Elżbieta Dziedzic, the Council President, and all the participants of the event.

On the occasion of the 60th anniversary of the establishment of the Polish Community Council of Victoria, I extend my congratulations in recognition of your work as regards popularising Polish history and protecting the good name of our country abroad. On this special day, I would like to thank you for your efforts put into the consolidating of the Polish community and the development of good Polish-Australian relations. Let me tell you how thankful I am for your activities aimed at cultivating the memory of the past generations and the care of today’s prosperity of our countrymen. The Council activity may be an example for Polish diaspora organisations scattered around the world how to work effectively for the maintaining of Polish national identity and protection of Polish cultural heritage. I also thank you for providing community services for Poles living in Victoria.

I am especially grateful for the recent implementation of projects by the IPN in Australia. The “Time For Heroes” exhibition devoted to Captain Witold Pilecki and Warsaw Uprising , which came into being on the initiative of the Pilecki Projekt Committee in cooperation with the Polish Community Council of Victoria, Polish Home Army Ex- Servicemen Association and the Association of Polish Political Prisoners in Australia, as well as the accompanying exhibitions on the “Żegota” Council for Aid to Jews and the Samaritans from Markowa, i.e. the Ulma Family murdered by the Germans for helping Jews, were well received, among others, in the state parliaments in Melbourne and Perth and in the “Kadimah” Jewish Cultural Center. It is hard to overestimate your assistance in the spreading English-language educational materials pertaining to Polish history and Polish national heroes.

In my opinion, this has been a great success in the cultivating of Polishness abroad and presenting Polish-Australian historical bonds. All these goals would not have been realised without the engagement of the late Marian Pawlik, long year President of the Council.

Thanks to strong cooperation with you, in Australia we have also had an opportunity to present the “Polish Operation” exhibition prepared by the IPN Archive and concerning the crimes committed by the NKVD in the years 1937-1938. In the face of today’s political situation, the exhibition based on our archival materials and invaluable documents granted to us by the Ukrainian State Archives is an excellent tool as regards spreading historical truth among foreign societies and Polish diaspora organisations around the world.

I remain hopeful for further cooperation and I would like to invite you to participate in our international commemorative and educational project “Trails of Hope. The Odyssey of Freedom” prepared by the IPN in cooperation with the Polish Ministry of Foreign Affairs in connection with the 80th anniversary of peregrinations of General Anders’ Army evacuated from the USSR. The initiative is planned for the years 2022-2025, and it is aimed at commemorating the war effort of the Polish Armed Forces during the Second World War, and the fate of civilians evacuated from the USSR alongside with General Anders’ and General Maczek’s soldiers. The main aim of the “Trails of Hope. The Odyssey of Freedom” project is the education of international community on the contribution, determination and engagement of Poles in the fight for Europe free from totalitarianisms.

The integral part of the project is the exhibition which we could jointly launch next year on Federation Square, on Anzac Day, which seems to be a perfect occasion.

Let me congratulate you once again on all your accomplishments, and I wish you perseverance in your further work for Poles living in Australia. I am hopeful for further equally successful cooperation which would contribute to spreading knowledge on Polish history among international audiences. We are confronting now new difficult tasks and it is our mission to educate international audiences on totalitarian regimes and their consequences. Thanks to the “Trails of Hope. The Odyssey of Freedom” project, we can show people around the world that the functioning of totalitarian systems and their not fully settled heritage constitute a major threat.