The meaning of the term “liberation” in Soviet and Russian narratives on the Second World War, and the subjugation of Poland and other European countries in 1944–45

Promoting the term “liberation” to denote the entry of the Red Army into several European countries – in 1939, 1944–45 and later on – was a fundamental element and starting point for image-building activities intended to disguise Soviet imperialism and Joseph Stalin’s policy towards these countries. 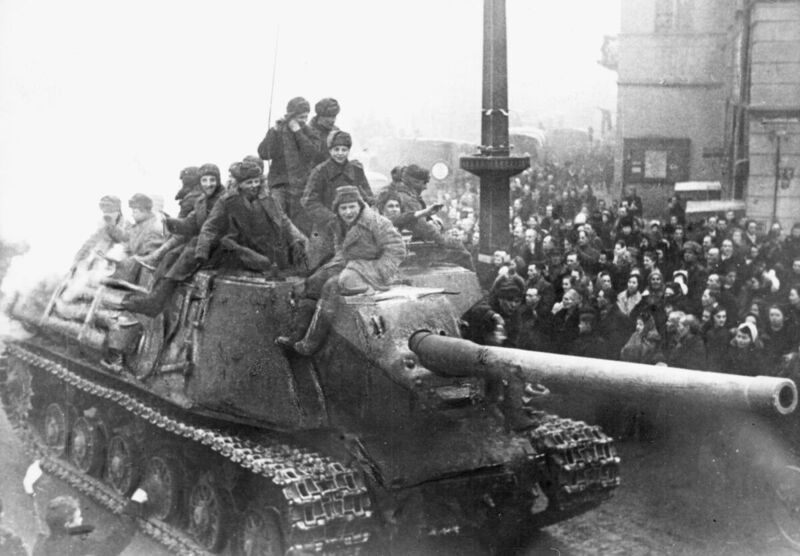 In diplomacy and international contacts, the Soviets made sure that the phrase became the most important and the most widely used term describing the activity of the Red Army in Europe. Printed in huge numbers manifestos, brochures, flyers, and propaganda posters always referred to the Red Army as “liberating”, underlying the fact that “we liberated Europe”. That is why the construction of monuments expressing the local people’s gratitude for liberation was ordered immediately after the Soviet troops entered a captured territory. Many of the monuments were erected within weeks of the Red Army’s arrival, and others added later; it was all part of a coherent and intentional propaganda program.

When steps were taken in contemporary Russia to refresh the Stalinist propaganda on the Second World War, aggressive promotion of the term “liberation” once again became the key tool of the diplomacy and media campaign. Understanding that this verbal ploy, based on popularized catchword describing the whole complex of events, is the essence of the whole narrative (rather than its complement) is the necessary condition for rational and efficient counteraction against false allegations and attacks on Poland’s reputation. Just like the term “liberation” was once enforced as the concept that determined the descriptions of the capturing of Europe by the Red Army, it is now playing an identical role in Russian propaganda.

In the core of the Russian propaganda concept lies the enforcement of the term “liberation of Poland” to describe the historical reality of the enslavement that took place in its territory in 1944–45. That was the propaganda narrative in the USSR and its satellite countries throughout the communist period: every time a country in Central, Eastern, and Southern Europe became dominated by the USSR, it was called liberation. Today, it is once again a fundamental motif of the Russian narrative based on manipulation of historical facts.

Poland was an Allied country, fighting against the German Reich from the beginning to the end of the war. Any attempts at using terms that are inadequate or constitute quasi-compromises (phrases that are in fact oxymoronic, or semantically ridiculous) fundamentally undermines the Polish argumentation, leaves it bereft of its internal logic and coherence, and obscures the perception of facts. This will always serve the false Russian narrative.

The Institute of National Remembrance realises how long-lasting some propagandist ploys forcibly instilled in several generations of Poles during the Polish People’s Republic as obvious ways of describing reality in public space, schoolbooks and the media, really are. Hence, the Institute has on numerous occasions explained in letters addressed to local governments in Poland that “the activities undertaken by the USSR in 1944–45 were not the liberation of Poland but the re-annexation of nearly half of the territory of the Republic and the forced subservience of the rest of the state enforced on Poland as part of the Stalinist system. The shift from German occupation (under Adolf Hitler) into another form of occupation (under Joseph Stalin) cannot, in the light of the facts and language accuracy, be referred to as liberation. In the wake of that shift, after expelling the Germans, the Red Army, the NKVD, and other Soviet services did not allow – against the hopes of the Poles – the reinstitution of a sovereign and free country. Instead, they established state structures fully dependent on the decision-making centres in Moscow, resorting to terror and violence.”

One should also realise that history, being part of the humanities, sometimes needs to distinguish between individual experiences and holistic approaches. The fact that in 1941 the territory of Poland became the arena of a clash between two totalitarian powers resulted in the Germans liquidating the Soviet occupation of the eastern half of Poland. Many people gained personal freedom: they were liberated from NKVD prisons, and some of them were saved from death at the hands of the Soviets. It is obvious that a Polish citizen, even if liberated from a prison in Lwów, Białystok, or Vilnius, could call that fact “liberation” (in the sense of an individual experience). At the same time, it is obvious that such experiences cannot be the reason to extend that notion to an entire region or state. In fact, while liquidating Soviet occupation, the Germans imposed their own order on society. This order was based on a new form of enslavement – leaving no space for freedom or independence. In conclusion, what transpired at the time was the shift from one form of enslavement into another. Calling these phenomena the liberation of Lwów or the liberation of eastern Poland would be a distortion or even falsification of history. Such ideas should trigger outrage as being contrary to the Polish historical experience. They are offensive to the victims of German enslavement which, also on these lands, resulted in a huge number of victims among the citizens of the Republic of Poland of various nationalities. The individual experiences of people released from Soviet prisons do not change the above mentioned  conclusions, while using the term “liberation without freedom” would be absurd both in the logical and semantic sense.

The same language dependencies concern the description of the events from 1944–45, when it was in turn Soviet totalitarianism that liquidated the occupational structures of the German Reich in Polish lands and introduced its own, totalitarian order, both in the territory incorporated directly into the USSR and in the remaining territories, where Stalin set up puppet communist governments. Once again Polish society had no chance of becoming free and independent: one form of enslavement of Poland (by Germany) was replaced with another (by the USSR). These conclusions cannot be changed by any individual experiences of people released from German prisons and concentration camps.

There is no contradiction between understanding the fate of prisoners of German torture chambers and concentration camps who survived long enough to witness the flight of their German guards and the factual assessment of the enslavement of Poland perpetrated by the Soviet Union in the final period of the war. There are no obstacles to using the term “liberation” (construed precisely in the individual dimension) to refer to the personal experience of inmates who were allowed to cross the barbed wire of the camps as being liberated from German oppression. Recalling the facts about the Soviet enslavement of Poland, its regions and cities, is not at all contradictory with celebrating the liberation of the inmates in KL Auschwitz and other prisons and concentration camps. (By the way, it is worth remembering that the commonly used phrase “liberation of Auschwitz” in the actual sense is construed precisely as the celebration of the liberation of the inmates of the concentration camp and not of KL Auschwitz itself. It was a tragedy for many inmates that, having been freed from Auschwitz, they still could not live in a free Poland, but in the territory enslaved by the Soviet Union. Moreover, many former Auschwitz inmates later became prisoners of the communist regime. One of the most famous victims of the crimes of communism, who had previously been an inmate of German KL Auschwitz, was Cavalry Captain Witold Pilecki.

Both with reference to Soviet prisons in eastern Poland in 1941, and German concentration camps and prisons on Polish lands in 1944–45 what we were dealing with was the liberation of prisoners of a totalitarian occupant with a simultaneous extensive campaign of repression against various social groups and institutions of the Polish Pro-Independence Underground by the authorities of the other, victorious totalitarian regime. Inmates were liberated in many places. However, contrary to the expectations and hopes of millions of Poles, what we were dealing with instead of liberation was as a new thrall of Polish lands and Polish society.