Radio Free Europe was founded in 1949 in New York by the National Committee for a Free Europe. The objective was to transmit programs to the countries of the Eastern Europe and thus undermine information monopoly of the censored official propaganda. 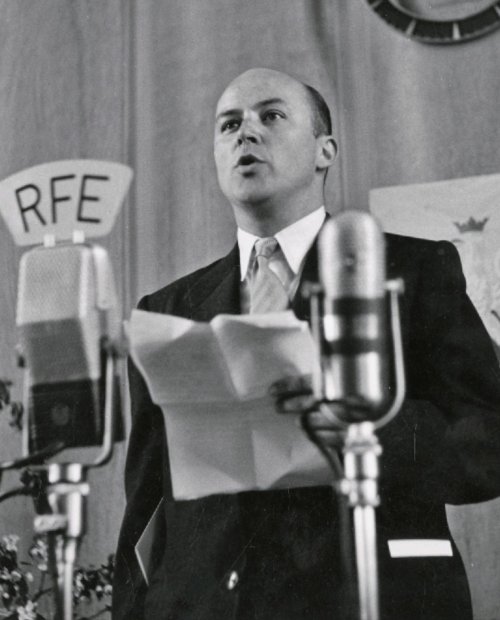 The radio programs were broadcast from Munich, Germany. The first audition was aired in June 1950. Soon six national broadcasters were created. The Polish service of Radio Free Europe started its activity on 3 May 1952.

After Poland fell into the hands of Soviet-sponsored communists after World War II, Jan Nowak-Jeziorański, the legendary fighter for the Polish resistance, continued to fight for his country’s freedom by helping to found Radio Free Europe’s (RFE) Polish Service. In his memoirs, Nowak-Jeziorański wrote, “Rebuilding a sense of community was the first and foremost aim of our radio station. Maintaining hope was its second purpose.”

The service’s first broadcast in Polish was aired from Munich on 3 May 1952, with Nowak giving the inaugural address. In his memoirs Nowak-Jeziorański wrote, on the importance of the service, “In the darkest years of Stalinism, the Security Office’s omnipotence, repressions, distortion of history and secrecy, Radio Free Europe gave Poles a sense that someone, somewhere, knows the truth and speaks the truth; that the crimes of the regime will be named and the perpetrators―punished.” His audience included Pope John Paul II, who once told Nowak-Jeziorański that he listened to him as he shaved every morning. Nowak-Jeziorański headed the Polish service until 1975. The service was managed later by Zygmunt Michałowski, Zdzisław Najder, Marek Łatyński, and Piotr Mroczyk. Apart from current information, the Polish service provided news concerning political, economic, cultural, music and religious issues. The activity of the broadcasting station contributed significantly to the exposure of the abuses of the communist system (famous auditions by Józef Światło in 1955) and the endorsement of democracy. RFE was systematically, but not completely effectively, jammed by the communists. Since 1990 the Polish section of RFE had been operating officially in Warsaw until it ceased the activity in 1994.