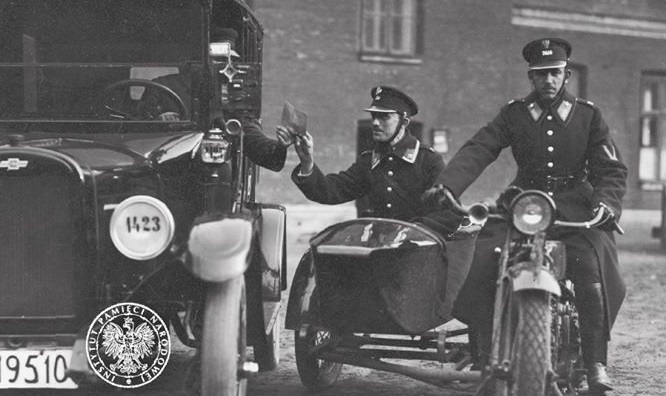 The Institute of National Remembrance, Sub-Branch in Kielce, Edward Lipiński School of Economics, Law and Medical Sciences in Kielce and Vinnitsa Cooperative Institute cordially invite you to participate in:

Auditorium of the University of Economics, Law and Medical Sciences in Kielce

The objectives of the conference are focused on the exchange of views, opinions and experiences of representatives of the world of science and European police authorities. The main subject of the speeches will be the analysis and broadening of knowledge about public order services, cooperation with judiciary institutions, the legal systems in force and the tasks and roles they play in the policy of strengthening the state system. In addition, presentations will be held on individual attitudes of representatives of security forces, also in regional aspects. It is also important to characterise the existing scientific output and to indicate or verify the available sources concerning the dependence of police authorities on the legal and constitutional model of the state and the ideologisation of police officers. It will also be important to show how police authorities are used to silence individuals and organizations that oppose the imposition of undemocratic political solutions on society.  An added value will be to outline new areas of research on this topic.

We hope that the subject matter of the conference will meet with your interest.

Police formations in occupied Poland during the Second World War

Police forces in communist Poland. The Civic Militia and its individual formations in the years 1945-1990

Depending on the number of applications received, a two-day conference may be organised, i.e. 30-31 May 2022. (in stationary or on-line form).

Organizers: Institute of National Remembrance, Sub-Branch in Kielce, Faculty of Law at the Edward Lipiński School of Economics, Law and Medical Sciences in Kielce

Chair of the conference:

- Head of the IPN, Sub-Branch in Kielce – dr Dorota Koczwańska-Kalita

- Dean of the Faculty of Law and Security – dr Waldemar Cisowski

Participation is free of charge

Applications, including the topic of the speech and the full text in Polish, should be sent to the following address: Faculty of Law of the Edward Lipiński University of Economics, Law and Medical Sciences in Kielce 109 A Jagiellońska Street, 25-734 Kielce, Tel. /041/ 3451313, e-mail: darek.palacz@wp.pl or marzena.grosicka@ipn.gov.pl

The deadline for registration for the conference is 31 March 2022.

The organisers will ensure the publication of the book resulting from the conference, which will appear in print. Therefore, full texts in Polish, supplemented by the results of discussions, should be submitted to the secretaries by 30 June 2021.

The organisers reserve the right to select the submissions and texts sent for print.

Submissions without the text of the paper will not be accepted.