‘We couldn’t but help them. They were our neighbours’ – An Interview with Eugeniusz Szylar, Righteous from Markowa

In connection with the Polish National Day of Remembrance of Poles Rescuing Jews under German Occupation we would like to refer back to an IPN interview with Eugeniusz Szylar, a Righteous from Markowa 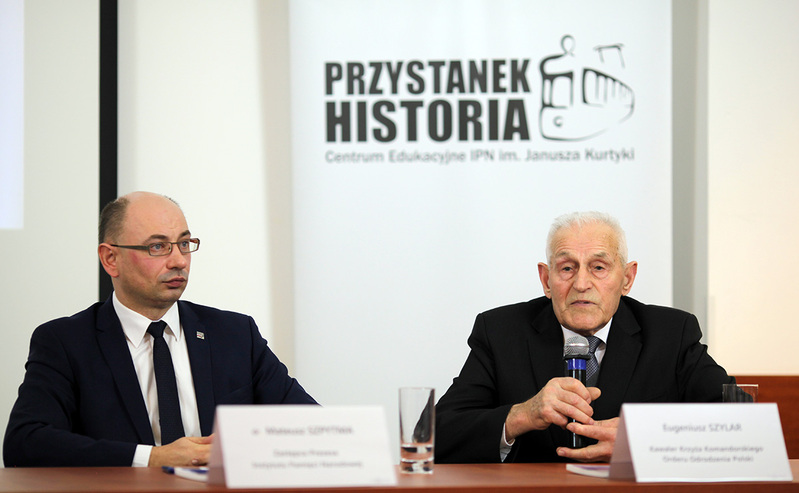 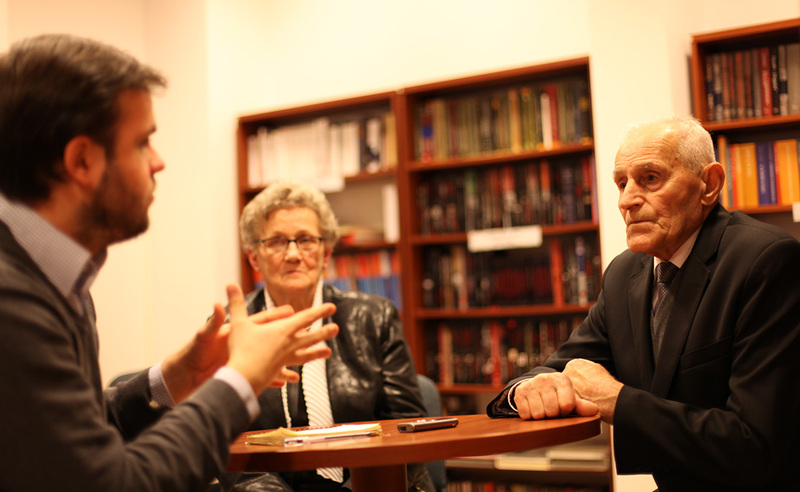 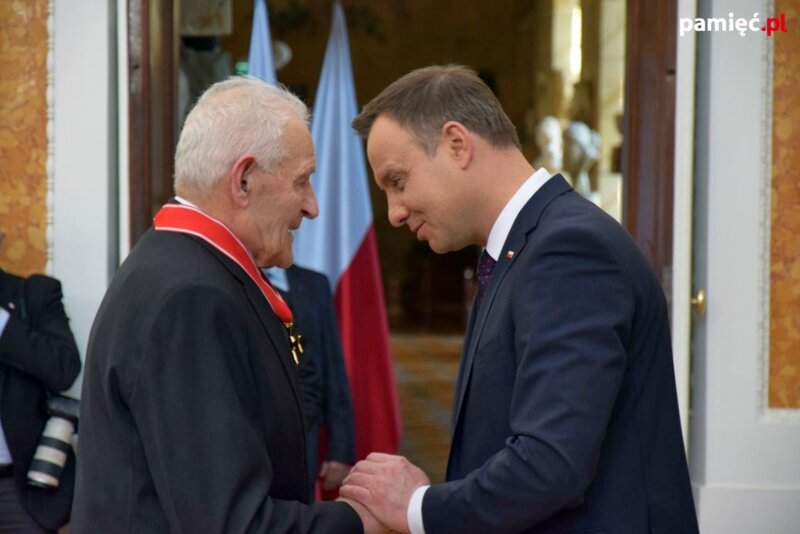 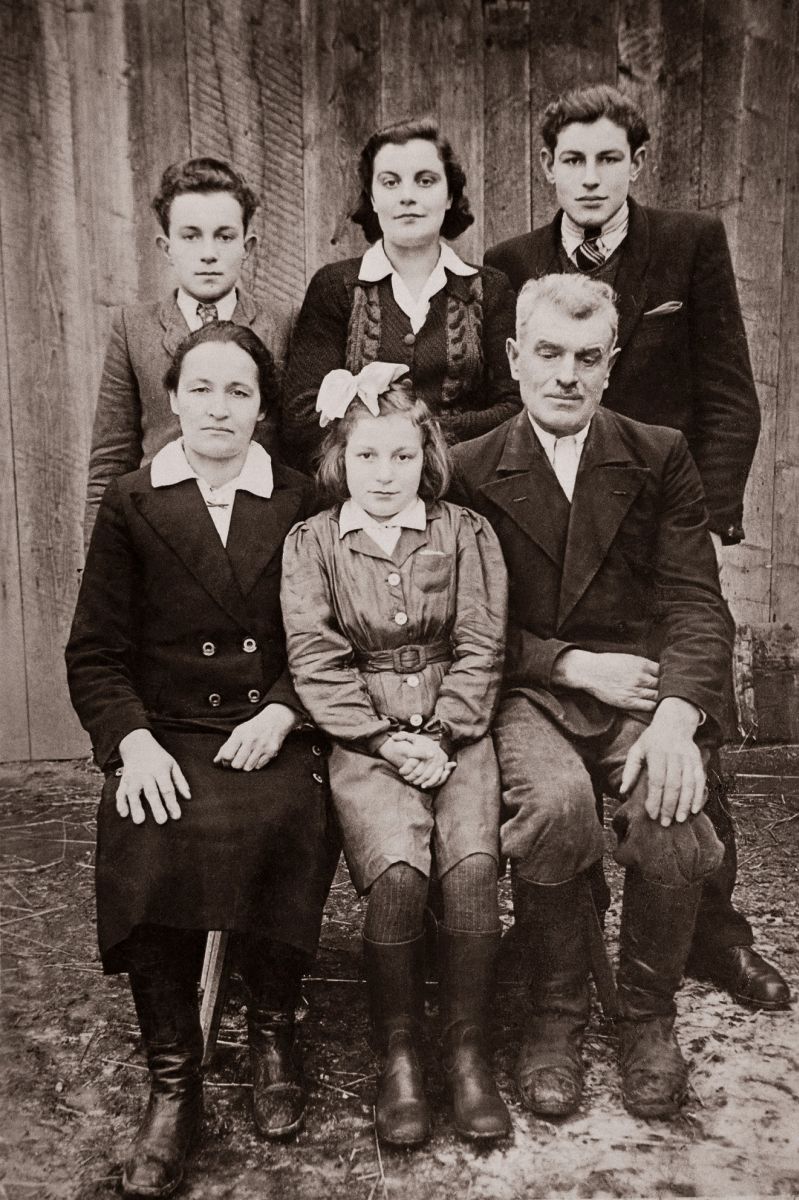 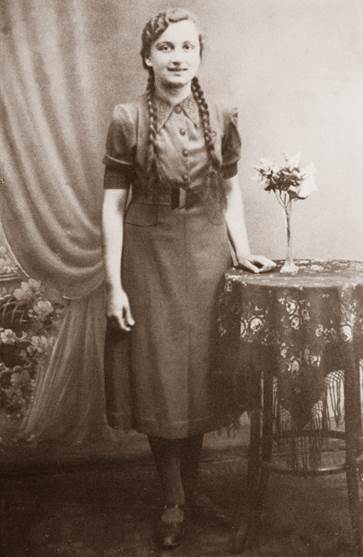 In January 1943, Eugeniusz Szylar and his family hid seven people from the Weltz family – Miriam with her children: Mońko, Abraham, Reśka and Aron with his wife Shirley and son Leon. The Szylar family risked their lives, bearing in mind the terrible fate of the Ulma family, who had lived nearby and provided shelter to Jews, they, nonetheless, helped a family in need for 17 months. All of them survived the war.

These events stuck deeply in Szylar’s memory, though at that time, he was just a boy in his teens. Years later, as a special guest at the European Day of Remembrance for the Righteous (March, 6th) in Warsaw, which is co-organised by the Institute of National Remembrance, he describes the circumstances of agreeing to help the Jews and the related dangers.

What were the Polish-Jewish relations like in Markowa before the war?

Before the war, over 120 Jews lived in Markowa. I remember a Jewish acquaintance buying calves from my father. The relations were good. We lived normally, as neighbours.

Do you remember the day the war broke out?

This was my first day at school, I was seven, I was a first grade pupil. The teachers already knew that Germany had attacked Poland and informed us that we would not have classes. They sent us home and warned us against walking along the main road. When we  were coming back from school , we saw planes flying overhead.

What were the circumstances which led your family to start helping Jews?

The Jews just came to us, it was January 1943. They took shelter in our barn – it was quite a large building, it was about 12 metres long, thatched, and about 20 metres from our house. Inside, there was hay, straw, and a cart – then unused, because we mainly rode our sleigh during the winter. When dad opened the barn door, he saw the Jewish family, who kissed his hands and begged: ‘Antek, don’t drive us away!’ They were our neighbours… (before they moved to Jarosław, they had lived in Markowa – ed.). We couldn’t do anything but help them.

Dad first brought them food and then covered their hideout with straw to provide protection from wind and frost. The Weltzes quickly moved to the attic of our house – they stayed in a makeshift tunnel made of planks. They had a window which let in rays of sunlight They provided heat as there was no heating.

As a boy of twelve, you also helped. What was your role?

I brought food, warned against dangers, e.g. by whistling when someone was approaching. I prevented my friends from entering the attic. They would ask me to go there e.g. to play many times – as children, we were often running around barns or attics. When someone asked about the noises from up there, I answered that they were made by animals.

You lived in fear for 17 months. Do you remember any particularly dangerous moments?

I had a neighbour - he is dead, so I will intentionally omit his name - who lived at his sister’s home. He had gone to school in Łańcut before the war. He had no job and no money. He often went to the local bar where the informers, who were in touch with the Gestapo officers from the area, often came . He once visited us – he wanted to borrow seeds to sow in his field. Dad agreed but said that he had to take them down from the attic where they were kept in a box.

Sometime later, when dad was absent, the neighbour came again and climbed the ladder to the attic himself. There, he saw one of the Jews who were hiding. When dad found out about this , he did not know what to do… He hurried to Dr Ignacy Mularek, a pre-war peasant movement politician who lived in Markowa, then a member of the underground organisation, the Peasants’ Resistance Movement. Dad had visited him often because we were not the only ones to fall ill – so were the Jews we hid. The physician knew of their hideout. When dad told him about the situation that involved the neighbour, Doctor Mularek had a meeting with him and said that if he reported the hiding Jews “he  would be in trouble ”. The situation calmed down, but we were still afraid.

When we started hiding the Weltzes, it was winter, so there was a danger that someone could find the hideout by following the footprints in the snow. Luckily, this did not happen.

Did anyone else know that you were hiding the Jews?

Dad had three brothers, all of whom lived nearby, on the other side of the road. The eldest brother, a married man, visited us nearly every day; the others – bachelors – also came. We kept all this secret. Also from my father’s uncle, who was a manager for the voluntary fire brigade in Markowa. The neighbours knew nothing of the hiding Jews. Or maybe they knew but did not want to speak of it?

The son of the village head, who later married one of my sisters in Markowa, was also unaware of it. One day, he saw her anxiety and asked: “Why are you so afraid, Hela? Maybe there are Jews in your house as well?” She quickly denied this.

Did the Jews you were hiding offer you any reward?

This was disinterested help. After the war, one of the people we saved wanted to give us 20 morgs of her field. The commune, however, had divided the former Jewish land among the poorer inhabitants. When the letter from the Jews we had saved reached us, dad went to the notary, who stated that this could be done in accordance with the law. But dad did nothing about the land because he didn’t want a conflict with the neighbours. He had helped without expecting any money in return.

Were you aware of the dangers? The Germans killed entire families for helping Jews…

I was not fully aware of it. I knew that the Germans could come and shoot a Jew or even a Pole. However, I had never expected what they did to the Ulmas. I was very afraid from that moment on. And it was not only me – the entire family lived in fear. Dad didn’t know what he was supposed to do – he risked the lives of his loved ones every day. This fear was surely also experienced by other families in Markowa who hid Jews in their homes.

How do you remember the Ulma family?

They were good, wise, hard-working. They had never done any harm to anyone. Józef Ulma’s parents were our neighbours across the baulk. And the house where Józef and Wiktoria moved to after their wedding was several hundred metres from ours.

When the news of their murder spread, I happened to be at school. I was afraid that the Jews could have been found in our house as well. When I came back, I found the house totally empty. Dad wasn’t there, mum had taken my younger siblings, my brother and my sister, with her, while the elder sisters had gone to their friends. I didn’t even go to the attic, I was terrified. The situation calmed down in the evening.

Despite that, your parents decided to continue helping the Jews.

Dad used to say “God willing, we will survive”. It must have been the will of the Divine providence that we have persevered.

Why have you been silent for so long?

We were all afraid. Living in constant fear was physically and mentally straining , which resulted in my mum’s nervous breakdown. We only started to speak about that as late as the 1990s, after our parents’ death. My sister Helena even went to the United States, where the Weltzes moved after the war. Prior to that, the members of the family we saved wrote letters to us and sent parcels. The daughter of one of the women we saved, who was born in America, is still alive. But we are no longer in touch.

Today, there is the Ulma Family Museum of Poles Saving Jews in World War II in Markowa, which tells the story of people like you and your family. Not only Poles can find out about the story of the Szylar family, but also foreigners.

My wife and I are happy about this. If you start doing something, you should finish it – this is my opinion. It is thanks to Dr Mateusz Szpytma (the founder and the first director of the Museum, now the Deputy President of the Institute of National Remembrance – ed.), who visited us many times and took his time to persuade us to tell the history of our family. It was not easy to start – it took a lot of effort to verbalise our feelings towards those events . The memory of those times had been buried deep and I didn't  want to recollect them. However, when I told my story, I felt relieved. I do ,however, regret that my parents didn’t live to see it.