Behind the Scenes of the Greater Poland Uprising

What events led to the outbreak of the Greater Poland Uprising in December 1918? 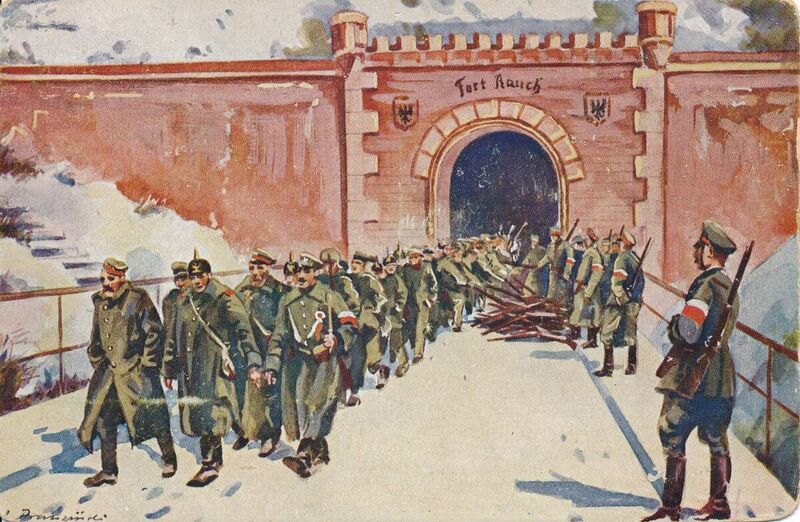 The Greater Poland Uprising has been analysed mostly in terms of its battles, which are dynamic, the most attractive and easy to remember. However, all events and phenomena throughout history are merely links in a never-ending chain of events, each of which has its cause and each of which is a starting point for further facts. Before the outbreak of the uprising in Poznań, certain specific circumstances had appeared which urged the people to start the fight. It is therefore necessary to describe the historical background.

We have got used to treating Polish uprisings with great esteem, which is a good thing. However, there have barely been any considerate and objective discussions focusing on the fact that most of our uprisings ended in defeat, which then gave rise to feelings of helplessness, tragedy or even frustration in hindsight. Internal mistakes, an incorrect way of thinking or wrongly chosen methods of fighting for independence have very rarely been regarded as the causes of defeats. Our history has witnessed spontaneous uprisings occurring at the wrong moment in time, poorly prepared and with emotions prevailing over reason and good organisation. However, the uprising in Greater Poland in 1918-1919 was organised in a very reasonable manner.

Before the Great War

For over a hundred years before the uprising in Greater Poland, local citizens had been participating in armed conflicts and carving their own specific path to independence. The traditions of the region go back to the Bar Confederation (1768-1772), which in certain circles is perceived as a time of armed uprisings against Russia, and partly against Prussia. The inhabitants of Greater Poland had their part in Kościuszko’s Insurrection of 1794, which, although successful in the region, did not end victoriously due to the defeat near Maciejowice. In the years 1806-1807, a victorious uprising against the Prussians broke out. It was initiated by Napoleon, who wanted to take advantage of the Greater Poland residents in order to hasten the final fall of the Prussians, who had lost the battle of Jena–Auerstedt. At that time, General Jan Henryk Dąbrowski and Józef Wybicki arrived in Poznań to urge local people to act. Within two weeks, Greater Poland was liberated from the invader armies, which is described in Book 10 of Adam Mickiewicz’s “Pan Tadeusz”, in the story told by Bartek Prusak, a Pole who came from Prussia and who observed the events that happened there.

There is an uprising against the Austrians in 1809 that is less well-known. It must also be noted that the participation of volunteers from the region in the November Uprising is of exceptional significance, considering Greater Poland’s tradition of fighting for independence. The defeat was a starting point for reflections on whether the adopted fighting method was correct. After the fall of Napoleon and the establishment of the Grand Duchy of Poznań, there were different opinions on the obligation to remain in a defensive position and choose another method of action, given the inability to choose a suitable date for initiating the fight for independence. This is when the activity of Dezydery Chłapowski, the pioneer of modern agriculture in Greater Poland, started. The first months of 1831, however, set a new direction for action, namely organic work combined with a readiness to assume the armed struggle. The struggle would come for sure, that much was inevitable, but no one knew if the right circumstances would appear in ten, fifty or a hundred years. During that time, the invader would germanise the country, erase national awareness, strive to integrate Polish society with the Prussian (German since 1871) state and deprive the Polish nation of its identity. Thus, the local people had to focus on the comprehensive education of Polish society, which would put the Poles on the right track, and not on futile uprisings that, without the help from outside, would certainly end in tragedy and jeopardise the effects of the pro-independence activity pursued thus far. The specific nature of Greater Poland’s road to independence was also about taking advantage of the invader’s methods of action and potential and therefore creating competitive structures, which will be described in detail below. Considering the method described, the Revolutions of 1848 that took place in Greater Poland were merely an “accident at work” - they were laudable, but did not necessarily match the spontaneous objective, similarly to the participation of volunteers from Greater Poland in the January Uprising in 1863-1864.

The years 1864-1914, between the fall of the January Uprising and the outbreak of World War I, were of immense significance in terms of the shaping of new political forces in Europe, and the raising of the awareness of the Poles in the province of Poznań. A new generation was raised, which was not only affected by the awareness of yet another defeat, but also brought up in the spirit of organic work and hardened in the fire of emergency laws. All of the above was happening in the atmosphere of the approaching conflict between the greatest European superpowers.

The intensity of the organised Germanisation activities (not only in Poland, but also in Alsace, Lorraine and Schleswig-Holstein) grew visibly from January 1871, since the establishment of the German Empire. There was not enough time for them to unite Polish society in the German spirit. An inevitable, great conflict in the centre of Europe was approaching, so the Germans felt the urge to ensure that this part of the continent was at least relatively peaceful, if not loyal. A method based on force was therefore implemented. Luckily for the Poles, the implementation was rather awkward. The 1880s and the beginning of the next century was a time of particularly intense denationalisation of the Poles in the Poznań region and in the Russian Partition. After 1871, a number of extraordinary emergency laws were adopted by the Reich. In 1872-1874, the Polish language was almost entirely removed from schools. The German authorities also tried to limit the number of teachers of Polish nationality. In 1876, German was made the official language of the courts and offices. In 1885, the subjects of other countries were ordered to immediately leave the Reich. Another decisive move of the Berlin government was the establishment of the Settlement Commission in 1886, whose main task was to supervise those matters related to land ownership and, if possible, to hand it over to the Germans. The organisation was initially very successful, taking advantage of the fiscal, and not patriotic, attitude of some of the landed gentry from Greater Poland. It was only the fervent counteraction of Priest Piotr Wawrzyniak that stopped this tendency.

An event that caused great controversy was the establishment of the German Eastern Marches Society (Deutscher Ostmarkenverein), called H-K-T from the first letters of its founders’ names. The organisation, which comprised of no more than 21000 members in 1901, was very active and radical in Germanisation activities along the eastern borders of the Reich. Events that were particularly shocking for the public took place in the beginning of the 20th century: the obligation to use the German language in religion classes was introduced. The right to use Polish had already previously been limited. German was the only language allowed at public meetings or in school classes. However, students and their parents living in the Prussian Partition strongly objected to the introduction of German in religion classes, which were the last bastion of Polish culture left in schools. That period witnessed the rebirth of tendencies visible in the Kulturkampf era, when Chancellor Otto von Bismarck, contrary to his intentions, instead of polarising Polish community, led to the unification of Polish environments around the Catholic faith and clergy.

The next stage of exercising pressure on Polish circles started in 1904, when it was decided that an administrative body’s opinion was a necessary condition to obtain consent to build new residential premises. The most spectacular proof that this approach was a bad one, was, among others, the demonstration of Michał Drzymała. The fact that the German administration lacked any sense of humour inspired it to use force, by hook or by crook. There were scandalous, and even grotesque scenes, which were later eagerly cited by Polish national associations, which clearly treated Drzymała instrumentally. Furthermore, in 1908, the so-called “muzzle act” was passed. It banned the use of Polish at meetings held in towns inhabited by less than 60% Poles.

The Polish environments demonstrated various forms of resistance to Germanisation, which, however, always remained within the limits of the applicable laws. At the highest level, in the Prussian and German parliament, there was the Polish Circle, which adapted its methods to the tendencies present in Berlin’s current policy. There were also skilled Polish parliamentarians with an excellent knowledge of political reality, who took a strong and firm position in favour of Poland during World War I and when Poland was regaining its independence.