One of the key meetings regarding the developments of 1981 took place near the border of the People’s Republic of Poland. On 3 April, Stanisław Kania and Wojciech Jaruzelski met the Soviet leaders in Brest to discuss the situation. 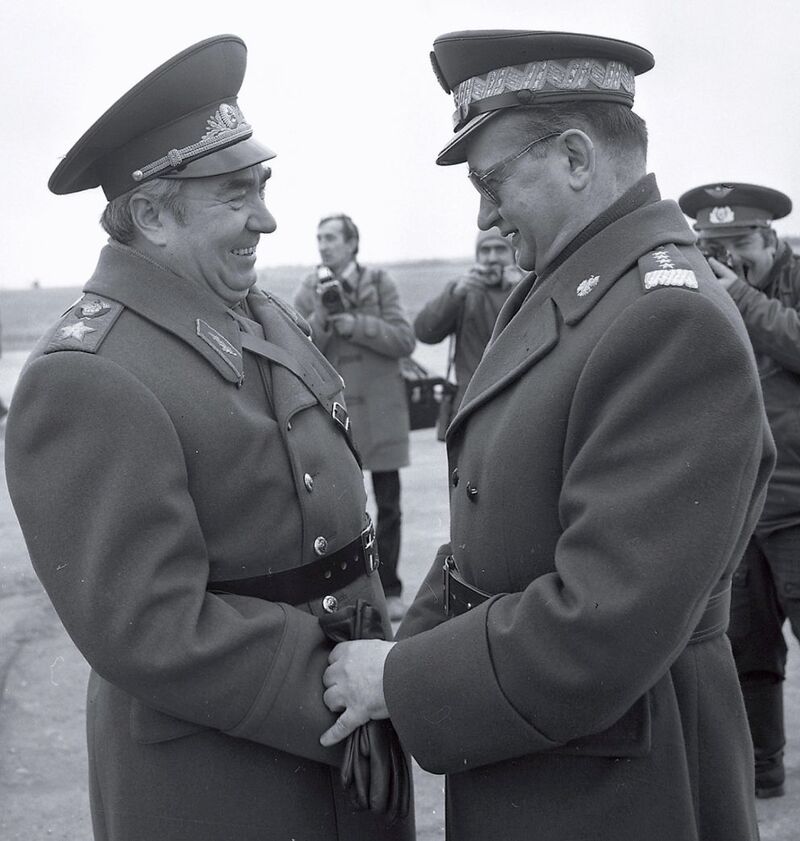 “We are all very worried about the further developments in Poland,” said Leonid Brezhnev early in April. The Soviet dignitaries made it clear to the Polish communists that there were waiting for decisive action concerning the opposition and Solidarity.

The Kremlin is not satisfied

The spring of 1981 was a turbulent time for the Polish communists. Exercise Soyuz-81 of the Warsaw Pact military forces took place in Poland from 16 March, while, moreover, the threat of Solidarity going on strike following the Bydgoszcz events was still valid.

On 30 March 1981, the government reached a compromise with the leaders of the trade union. Solidarity renounced the general strike, in return obtaining, among others, the legalisation of the founding committees of the Farmers’ Solidarity and the promises, never fulfilled, to have the events of 19 March in Bydgoszcz investigated and an act on trade unions drafted.

However, the leadership of the Communist Party of the Soviet Union (CPSU) was not satisfied with such an agreement. The “Polish” subject was discussed at a session of the Politburo of the Party’s Central Committee on 2 April 1981. Gensec Leonid Brezhnev reported on his phone conversation with the First Secretary of the Central Committee of the Polish United Workers’ Party (PZPR), Kania. Replying to the Pole’s complaints about the difficult situation in Poland and criticism from Solidarity, Brezhnev is believed to have reprimanded him with the following words:

“They were right. You should not have been criticised, but they should have taken a club into their hands. Perhaps then you would have understood. (…) How many times did we explain to you that you need to undertake decisive action, and that you cannot give in to Solidarity time and again.”

The “softness” of the PZPR was criticised at the session of the Central Committee of the CPSU.

“Our [Polish] friends managed to prevent a general strike. But at what price? For the price of another surrender to the opposition,” Brezhnev complained.

The Moscow comrades decided to summon Kania and Jaruzelski (at the time the Prime Minister and the Minister of National Defence) to a face-to-face meeting with the head of the KGB, Yuri Andropov, and the USSR Minister of Defence, Dmitry Ustinov. The two Soviets were also members of the Commission for Poland that the Kremlin set up after the workers’ strikes on the Polish coast in August 1980. The purpose of the meeting was to explain to the representatives of the People’s Republic of Poland the reasons behind introducing Martial Law, including the instruction not to be afraid of bloodshed. A list of recommendations was prepared, and Andropov and Ustinov were expected to deliver them to Kania and Jaruzelski.

Ustinov bangs his fist on the table

“Jaruzelski and Stanisław Kania were the only ones who took seats in the lounge compartment of the plane. (…) During take-off I did not know the destination of the flight, however, I was certain that we would land in Moscow. After a 40-minute-long flight, the plane started a sharp descent to land. (…) I realised that the duration of the flight was much shorter than the time it took to reach Moscow.”

They landed in Brest at around 8pm on 3 April. Black Volgas took them to an old railway siding, where special railway wagons were waiting. That is where a meeting of communist dignitaries that lasted until the morning of 4 April began.

“A few minutes into the talks I heard the raised voice of Marshall Ustinov and the sound of his fist banging on the table. That lasted for several minutes. (…) At around 3am Warsaw time (I did not adjust my watch), visibly exhausted, General Jaruzelski and Stanisław Kania left the lounge car,” Stepnowski reported. They landed in Warsaw at 4am. As Andropov emphasised, the purpose was “that it would not come to light that the Polish comrades had been anywhere”.

The Polish communists were apprehensive about whether they were capable of using force without Soviet aid. Ustinov believed that Kania and Jaruzelski had become terrified of the aftermath of Martial Law’s potential introduction as soon as they learned the impact of the events in Bydgoszcz.

“It was enough just to touch two members of Solidarity, and almost all the citizens were on their feet in no time at all, which means that Solidarity knew how to mobilise its forces quickly.”

Meanwhile, the Soviets insisted that Jaruzelski and Kania boldly took over the initiative and introduced Martial Law with their own resources.

“The general impression from our meeting with the comrades was that they were very tense and nervous, and you could see that they were distressed,” the two reported at a session of the Central Committee of the CPSU on 9 April. As Andropov further recounted, due to the lack of Soviet “experience in fighting against such negative phenomena” (i.e. strikes at workplaces), the Polish communists were presented with ready-made plans and instructions for the introduction of martial law, which Kania and Jaruzelski undertook to sign within a week of the meeting in Brest. These included recommendations concerning the state of emergency, curfew, and the use of both military and administrative powers.

However, during the meeting, Andropov made a provision that all and any actions towards the “counter-revolutionary elements” should be conducted solely by the Polish communists. Ustinov’s attitude was that of an experienced Soviet apparatchik:

“To dispel their apprehensions concerning the introduction of a state of emergency or martial law, we explained to them that, whenever an insurgency breaks out or riots start, many countries introduce martial law or a state of emergency. (…) Why Poles should be afraid of introducing such a state or law – we do not understand.”

The Soviet leaders, Brezhnev included, were unanimous about the need to persuade Jaruzelski and Kania to crack down on Solidarity radically and immediately, using their own means, i.e. those available to the Polish communists, without any second thoughts that “this could possibly lead to bloodshed”. Ustinov expressed the opinion that, should it come to a clash in Poland, a joint front of the army, the special forces, and the police could be maintained in the country, although, as he remarked:

“bloodshed is unavoidable, it will happen.”

Thus, Moscow counted on Jaruzelski acting independently. The Soyuz-81 military exercise ended, and the Warsaw Pact commander-in-chief, Marshal of the Soviet Union, Victor Kulikov, stated in a farewell conversation with the GDR military that:

“the solution to the [Polish] problem without the intervention of the allied armies should be the shared goal.”

After the meeting in Brest, Jaruzelski’s team embarked on more decisive action. Provocations, referred to by members of the Central Committee of the PZPR as “sectoral confrontations”, were more extensively resorted to, and the preparations for the introduction of Martial Law gained pace. Kania and Jaruzelski were beginning to understand that they could conduct the whole operation with their own forces only. Despite that, in the following months, Jaruzelski sought guarantees that, should the operation fail, the Soviets and the countries of the Warsaw Pact would be ready to pacify Poland. Moscow responded negatively.

Late in October 1981, Andropov reported at a meeting of the Central Committee of the CPSU that:

“Polish leaders keep mentioning military assistance from their “brotherly” states. We should, nonetheless, definitely follow our line and not send our troops to Poland.”

Almost on the eve of martial law being introduced, Jaruzelski personally told Kulikov:

“You will have to help us. We won’t be able to handle it alone.”

However, he did not manage to convince the Soviet comrades, and received Andropov’s reply: