Tuesday, 7 December 2021 marks the 80th anniversary of the attack on Pearl Harbor, the moment that thrust United States into World War II. On the occasion of the anniversary, President of the IPN Karol Nawrocki, Ph.D., has ordered a commemorative wreath to be laid at the Pearl Harbor National Memorial Hawai'i. A special feature about Polish-American brotherhood in arms authored by Karol Nawrocki has appeared in various language versions. 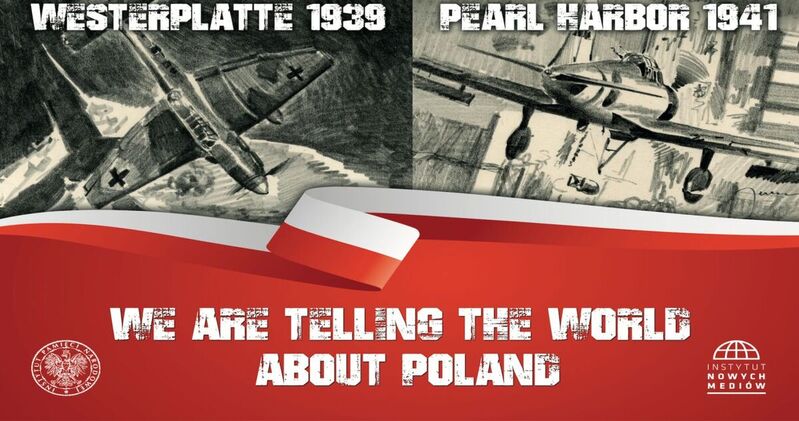 The Japanese attack on Pearl Harbor from 80 years ago pushed the USA to active involvement in World War II. Poland got engaged in the war two years earlier through the invasion from Germany, and later also from the Soviet Union. The Poles and the Americans fought on the same side in this conflict, and with the same goal: to defend freedom and humanity.

The Poles had their Pearl Harbor over two years earlier. Early in the morning on September 1, 1939, German battleship “Schleswig-Holstein” opened fire at Polish military post at Westerplatte, the Free City of Gdańsk. Almost at the same time, Luftwaffe bombarded a vulnerable town of Wieluń, which became a symbol of barbarity comparable with the demolition of the Basque Guernica in 1937. On that September morning, without declaring the war, Wehrmacht attacked at almost the entire length of the border. When the Red Army invaded Poland from the east over two weeks later, the fate of the heroically defended country was doomed. But the war started in Poland was already global at the time, with France and the United Kingdom allying against Germany.

Just as Pearl Harbor has a special place in the American history, Westerplatte and Wieluń are landmarks in the history of Poland. One could say that December 7, 1941, and September 1, 1939, are the two beginnings of the same war: the war in defence of freedom and humanity. Undoubtedly, one can also say that both the Poles and the Americans fought in the war on the good side from the start. This was a just war, according to the definition provided, among others, by St. Augustin.

Unfortunately, this effort did not allow Poland to regain sovereignty in 1945. After the defeat of the Reich, Poland long remained within the Soviet sphere of influence. Many Polish soldiers who refused to live in the enslaved homeland settled in the USA. Nowadays, when free Poland and the United States are allies in NATO, we can commemorate such brave people together, just as we will pay tribute together to those killed during the attack on Pearl Harbor.

See also: We Are Telling the World about Poland: "The Polish Gene of Freedom"