The Rats of Tobruk: An Enduring Australian and Polish Friendship

The Shrine of Remembrance, in partnership with the Institute of National Remembrance presents a digital event honouring the enduring legacy of the Australian and Polish Rats of Tobruk. 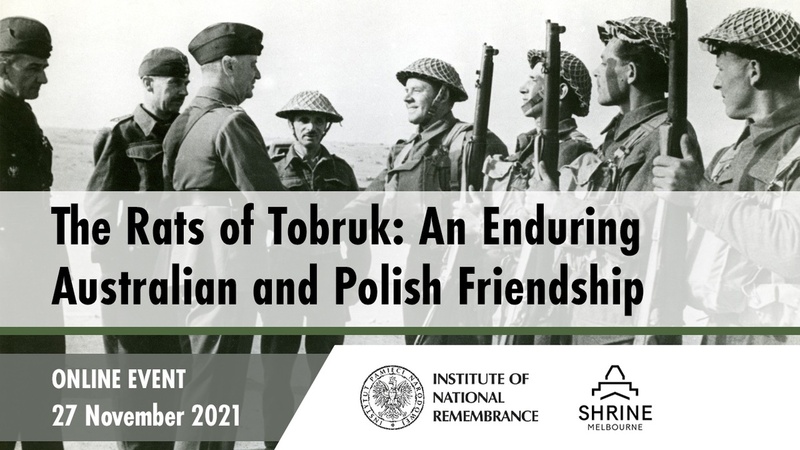 Join Dr Mark Johnston, Professor Marek Wierzbicki and Lucyna Artymiuk as they discuss the shared experiences of the Australians and Poles in Tobruk. Hear how the friendships forged in a small, coastal town in northern Africa influenced Australia’s post-war migration policies.

Between April and November 1941, 14,000 Australians were besieged within the Libyan fortress of Tobruk by a powerful Italo-German army. Ordered to deny Tobruk to the enemy for eight weeks, the men held out for five months. Pro-Nazi propagandist and broadcaster Lord Haw Haw (William Joyce) described the defenders as ‘rats’ – an insult which they adopted as a badge of honour.

Exhausted, the Australian troops were progressively withdrawn from Tobruk between August and November 1941. Other troops, including the Carpathian Brigade, comprising soldiers who had escaped Poland after its conquest by Germany and the Soviet Union in 1939, relieved them.

It was the Poles who finally ended the siege when they captured Acroma and linked up with the British 8th Army. In recognition of this feat, the Australians shared with the Poles their most venerated title. Henceforth, the Poles too would be known as the ‘Rats of Tobruk’.

Between 1947 and 1948, Australian veterans of Tobruk helped sponsor the migration of 1,500 Polish soldiers to Australia when it became impossible for these men to return to their homeland due to Soviet occupation.

Dr Mark Johnston is one of Australia’s leading authorities on the Second World War. He is the author of more than ten books, including The Magnificent 9th: An Illustrated History Of The 9th Division 1940–46 and An Australian Band of Brothers, profiling the Don Company of the 2/43rd Battalion. The battalion fought in Tobruk, El Alamein and New Guinea. Mark is the head of History, Politics and Philosophy at Melbourne’s Scotch College.

Professor Marek Wierzbicki is a Polish historian and political scientist, full professor, lecturer at the Catholic University of Lublin (Faculty of Social Sciences); since 2007, chief specialist (senior researcher) at the Institute of National Remembrance. His research interests include, inter alia, relations between the authorities and society in communist Poland, ethnic relations under Soviet occupation of Poland and Eastern Europe (1939–1941), the history of post-1945 Polish political emigration, including wartime military and civilian exiles, the social history of the 20th and 21st centuries and the role and mentality of youth in both Eastern (communist) and Western (capitalist) Europe during the Cold War (1947–1991). One of his scholarly works is a biography of Zygmunt Szadkowski – a Polish Rat of Tobruk, who became one of the leaders of the Polish political emigration after the Second World War.

Lucyna Artymiuk is a second generation Polish Australian, the daughter of a Polish airman who arrived in the antipodes in 1948. She is currently a history PhD candidate at the University of Melbourne. The topic of her thesis is the 1947 and 1948 migration of Polish soldiers to Australia. Her analysis of this unique migrant program is very significant as the issue has not been researched so far, and secondly, because the acceptance of the 1,500 Polish military was a litmus test for the 1949 mass migration of non-British inmates of displaced person camps in Western Europe to Australia during the post-war reconstruction era. Lucyna has been a prominent member of the Polish Australian community for the past 30 years, and is the Acting President of the Polish Museum and Archives in Australia. Recently, she has authored her father's biography From Poland to Where Ever in the World, co-curated an exhibition on the Polish soldier migrants Destination Australia, and penned the accompanying booklet. Her research has uncovered long-forgotten information of the post-war relationship between the Australian and Polish Rats of Tobruk, the contacts for the big part never documented or erased from the collective memory of the Polish and Australian veteran communities.