We Are Telling the World about Poland: "The Polish Gene of Freedom"

On the eve of the Polish Independence Day, the world media are running stories of "We Are Telling the World about Poland" project, including "The Polish Gene of Freedom" by the IPN President Karol Nawrocki. 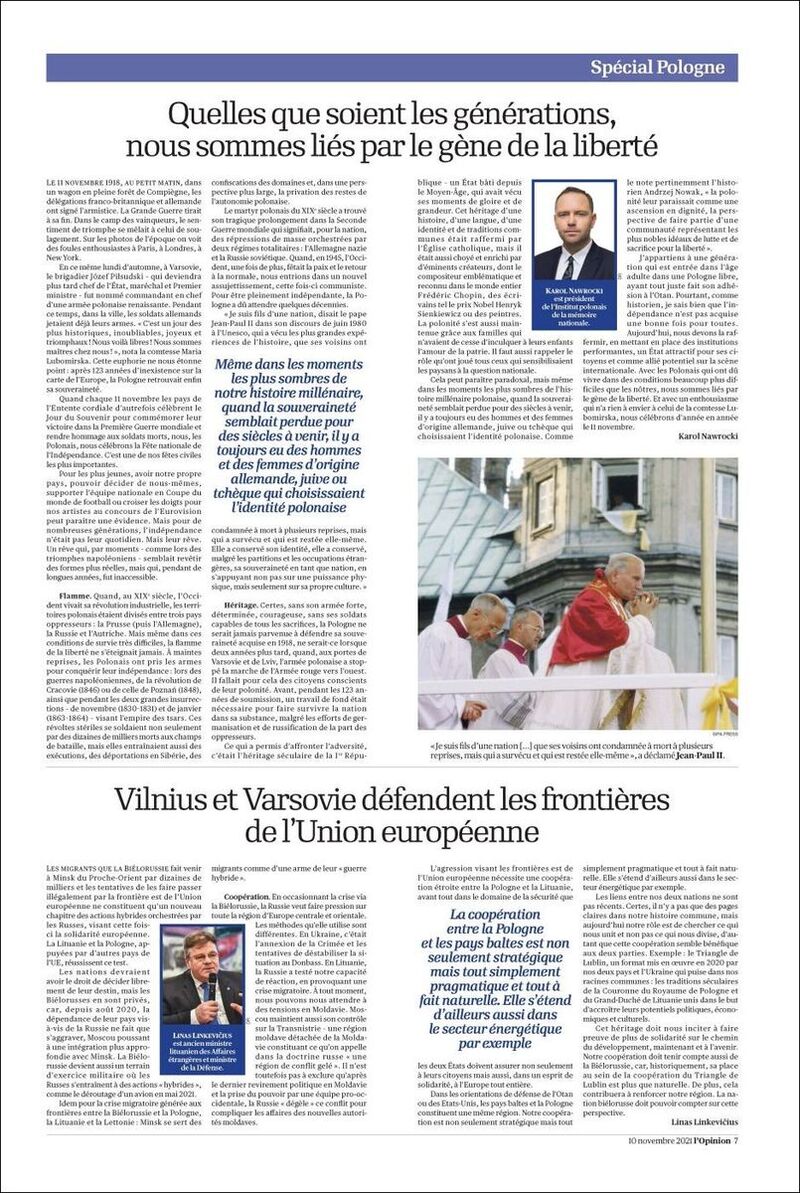 "Love for individual and collective freedom is part of the Polish DNA. It has helped us survive the most difficult moments in our history," writes Karol Nawrocki, and points out that for several generations freedom was not a reality but a dream. Yet, he stresses, even in the times of enslavement, "What paid off at that time was the centuries-long tradition of the Republic, a state that had developed since the Middle Ages and experienced its own periods of power and glory."

The Institute of National Remembrance is once again contributing to "We Are Telling the World about Poland" project initiated by The New Media Institute, with the support of the Polish Ministry of Foreign Affairs, the National Bank of Poland and the Polish Press Agency.

In previous editions of the project, the IPN has shared articles on, among others, the Battle of Warsaw and December 1970. Over a billion readers learned about "Solidarity" and the ideas of the movement that overthrew communism and has become deeply embedded into the Polish DNA. The article entitled "The May 3 tradition belongs to the Polish soul" was published in 62 countries, in 22 different languages.

Read the full text by Karol Nawrocki in English, French, Italian, Spanish or Polish below; other "We Are Telling the World about Poland" stories can be found here.

The Polish gene of freedom

Love for individual and collective freedom is part of the Polish DNA. It has helped us survive the most difficult moments in our history.

It was early morning on 11 November 1918 when the Franco-British and German delegations met in a railway carriage parked in a forest clearing near Compiègne to sign the armistice ending WW1. The victors were both triumphant and relieved. Archive pictures from that day show cheering crowds in Paris, London and New York.

On that same autumn morning, in Warsaw, brigadier Józef Piłsudski – later chief of state, marshal and prime minister – became commander-in-chief of the nascent Polish army. German soldiers were already being disarmed in the city. “This is one of those historical, unforgettable, joyous and triumphant days! We are free! We are masters of our own home!” wrote Duchess Maria Lubomirska. No wonder people were euphoric. Having been erased from the map of Europe for 123 years, Poland was regaining its independence.

Today, when the former Entente powers observe the Remembrance Day each 11 November to commemorate their victory in WW1 and pay tribute to the fallen, we Poles celebrate our National Independence Day. It is one of our most important national holidays.

The youngest generation may take it for granted that we live in our own country where we are free to decide about our lives, support the white-and-red team during football championships and keep our fingers crossed for Polish artists at the annual Eurovision song contest. However, for several previous generations of Poles, independence was not a reality, but a dream.  It was a dream that sometimes seemed to take shape – like it did during Napoleon’s victories – only to slip out of reach again for many years to come.

As the West was being heavily industrialised in the 19th century, Poland was partitioned by three powers: Prussia (later Germany), Russia and Austria. Yet, even in such dire conditions, the spark of freedom never died out. The Poles took up arms to fight for their independence on many occasions: the Napoleonic Wars, the Kraków Uprising of 1846, the Poznań Uprising of 1848 and the two great revolts against the tsarist empire: the November Uprising (1830–1831) and the January Uprising (1863–1864). These failed rebellions came at the price of not only battlefield casualties, but also executions, deportations to Siberia, requisitioned property and, more broadly, the elimination of the vestiges of Polish autonomy.

Polish suffering in the 19th century was tragically continued during WW2 when the nation experienced mass repressions inflicted upon it by two totalitarian regimes: Nazi Germany and the Soviet Union. In 1945, as the West again celebrated the return of peace and normalcy, we were entering another period of enslavement, this time of the communist variety. It was dozens of years before Poland could become fully independent.

Addressing the UNESCO in 1980, Pope John Paul II said “I am the son of a Nation which has experienced the horrors of history, which its neighbours have condemned to death several times, but which has survived and remained itself. It has kept its identity, and it has kept, in spite of partitions and foreign occupations, its national sovereignty, not by relying on the resources of physical power, but solely by relying on its culture.”

Of course without a strong military and the great determination, courage and sacrifice of soldiers it would not have been possible to defend the independence won in 1918 like we did two years later when Polish forces stopped the western advance of the Red Army near Warsaw and Lvov. But they would not have been able to put up a good fight if they had not felt themselves to be citizens aware of their Polish identity. Over the previous 123 years of subjugation, it required all the work to keep the nation alive against all odds and in spite of the efforts to germanise and russify the population taken by the partitioning powers. What paid off at that time was the centuries-long tradition of the Republic, a state that had developed since the Middle Ages and experienced its own periods of power and glory. This heritage of shared history, tradition and language was upheld by the Catholic Church, but it was also cherished and enriched by eminent artists: the globally recognised composer Frédéric Chopin, writers like the Nobel Prize laureate Henryk Sienkiewicz and painters. In the 19th century, Polishness was also preserved by families who insisted on bringing up children in the spirit of patriotism as well as the great number of social activists who, among other endeavours, tried to raise national awareness among peasants.

It is a seeming paradox that even at the darkest moments of Poland’s one-thousand-year-long history, when some believed independence was gone for centuries, there were people of German, Jewish or Czech origin who chose to identify themselves as Poles. As the historian Andrzej Nowak rightly pointed out “for them Polishness was ennobling – adopting it meant being admitted into a community that embodied the highest ideals of freedom struggle and sacrifice.”

Iam part of the generation who entered adulthood in a free Poland that had recently joined the North Atlantic Treaty Organisation. However, as a historian, I know fully well that independence is not given once and for all. We have to keep nourishing it by building efficient institutions and a country that is attractive for its citizens and international allies. What we share with our compatriots who lived in much more trying times is the Polish gene of freedom. Motivated by the same enthusiasm that was once expressed by Duchess Lubomirska, we, too, are happy to celebrate each 11 November.