The Day of Remembrance of the Dulag 121 Camp Prisoners and those who Aided Them ‒ Pruszków, 2‒3 October 2021

On 2 October 2021, on the National Day of Remembrance for the Civilian Population of the Warsaw Uprising, celebrations of the Day of Remembrance of the Dulag 121 Camp Prisoners and those who Aided Them took place in Pruszków near Warsaw with the participation of the IPN's Deputy President, Mateusz Szpytma, Ph.D. 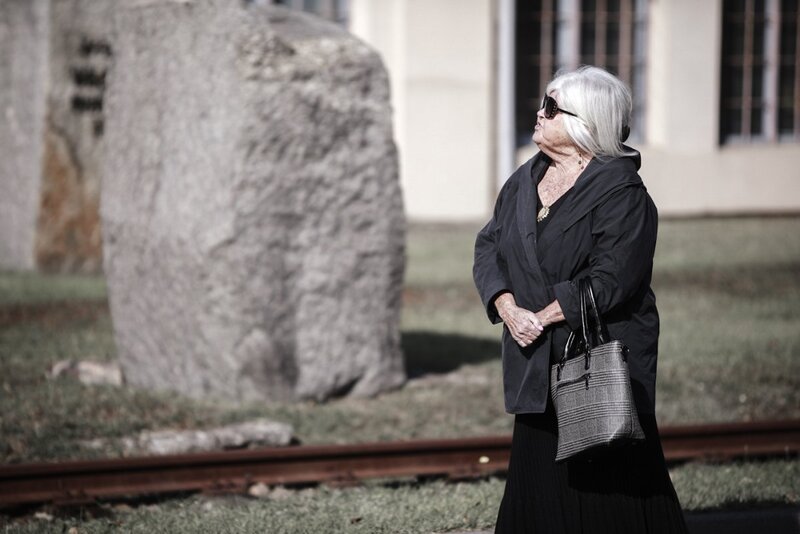 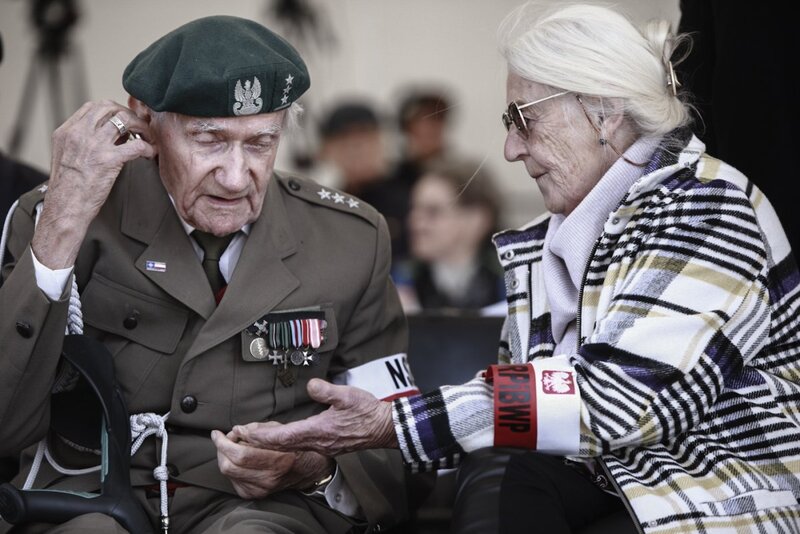 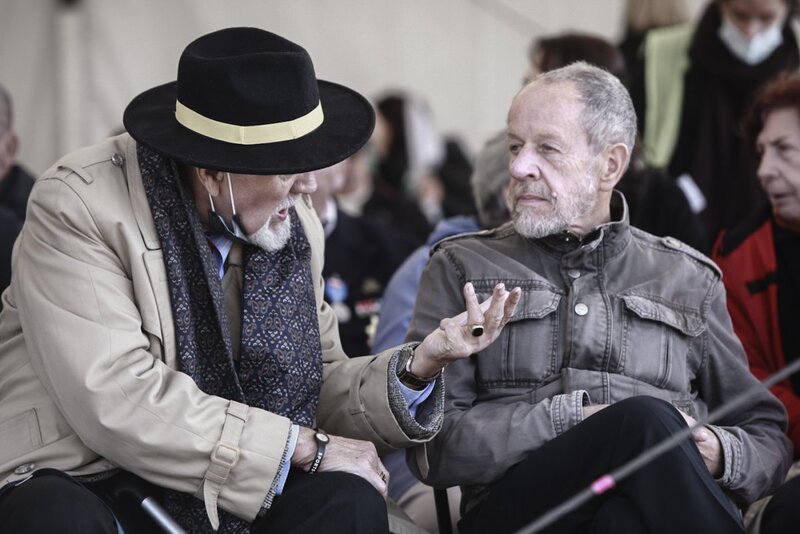 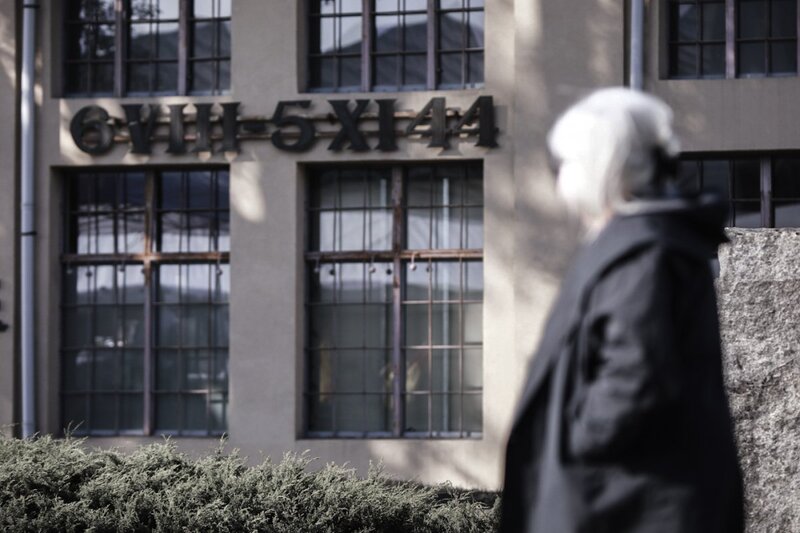 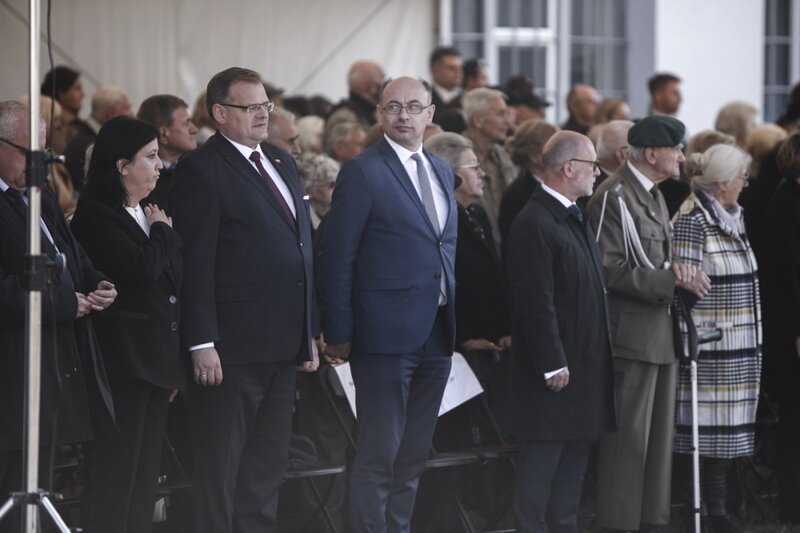 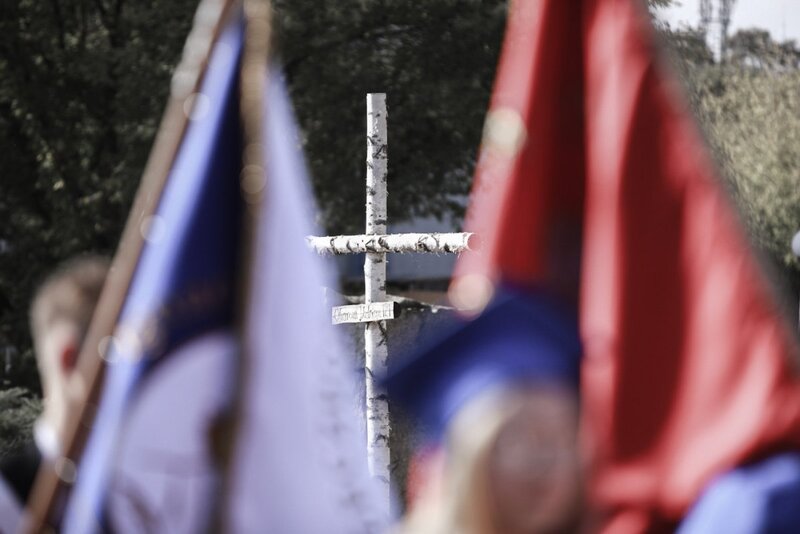 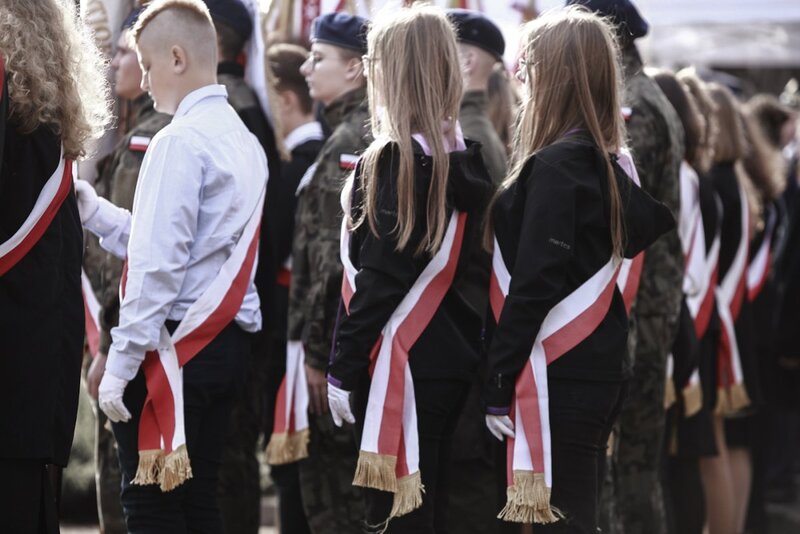 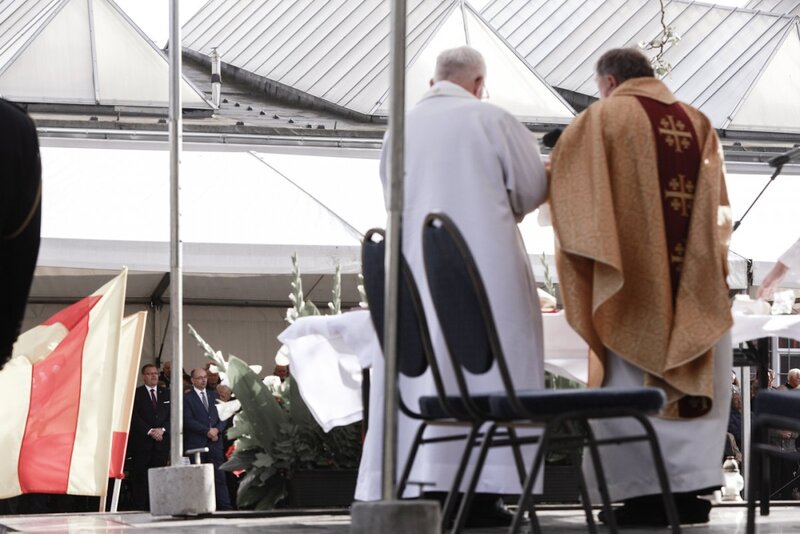 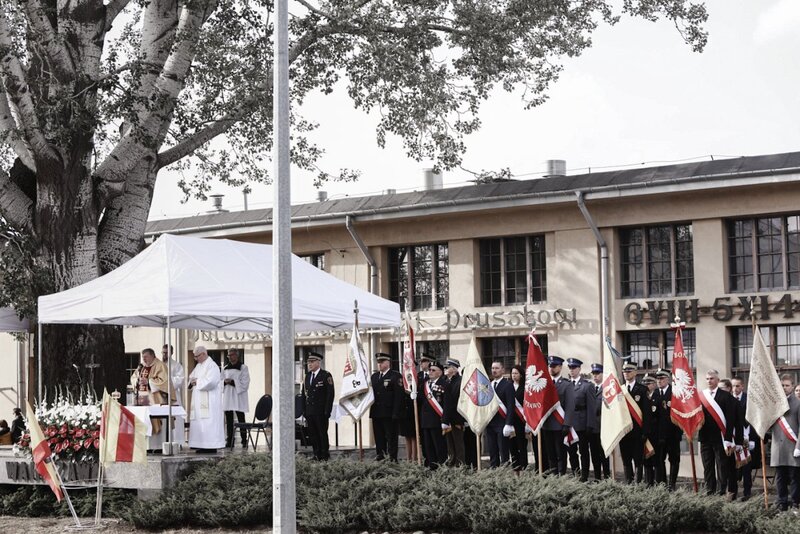 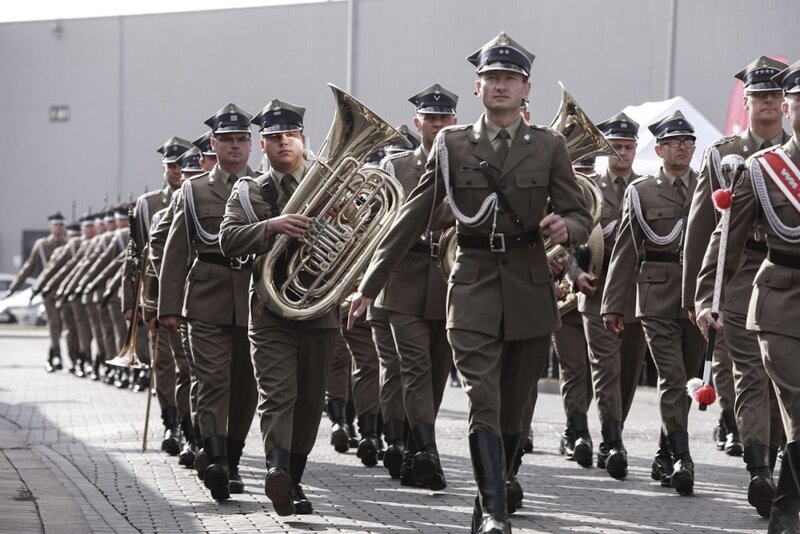 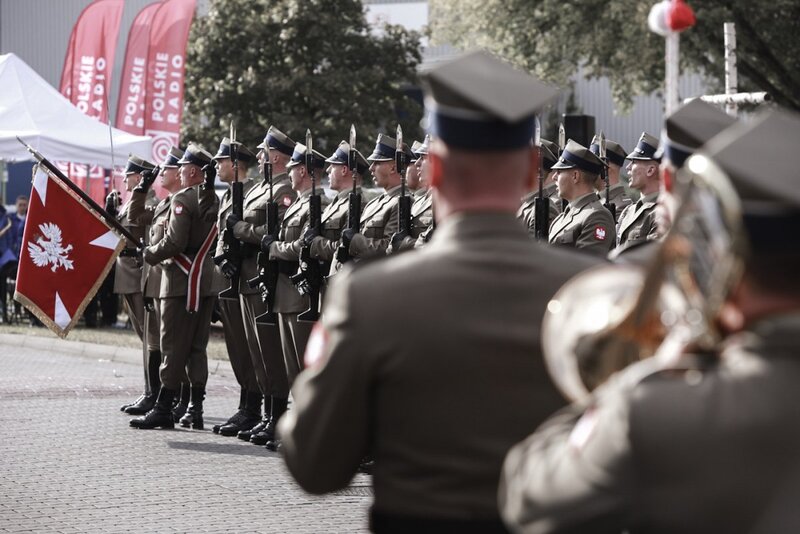 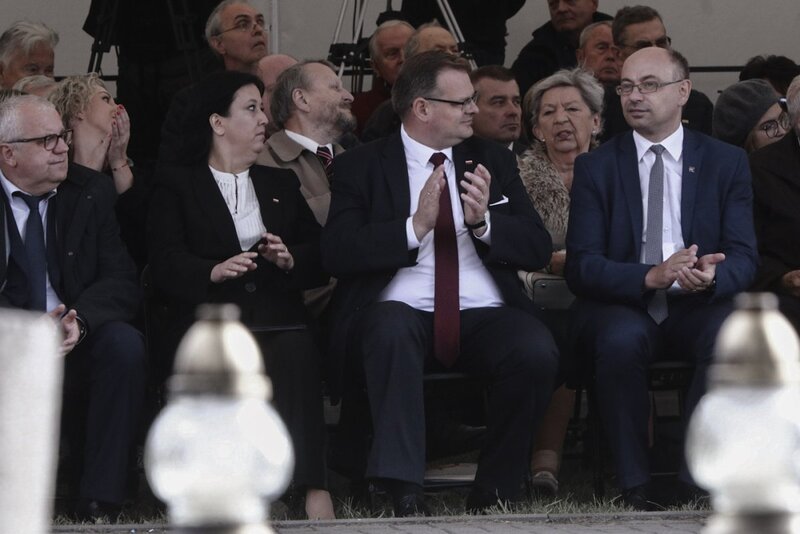 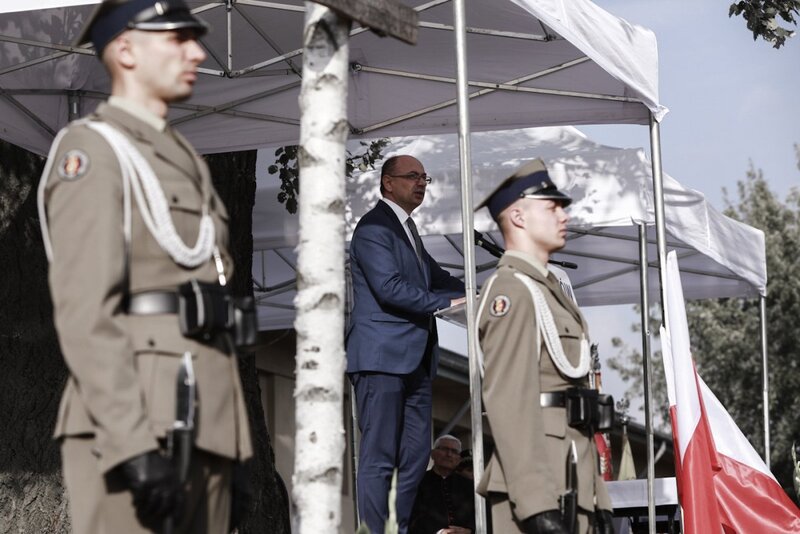 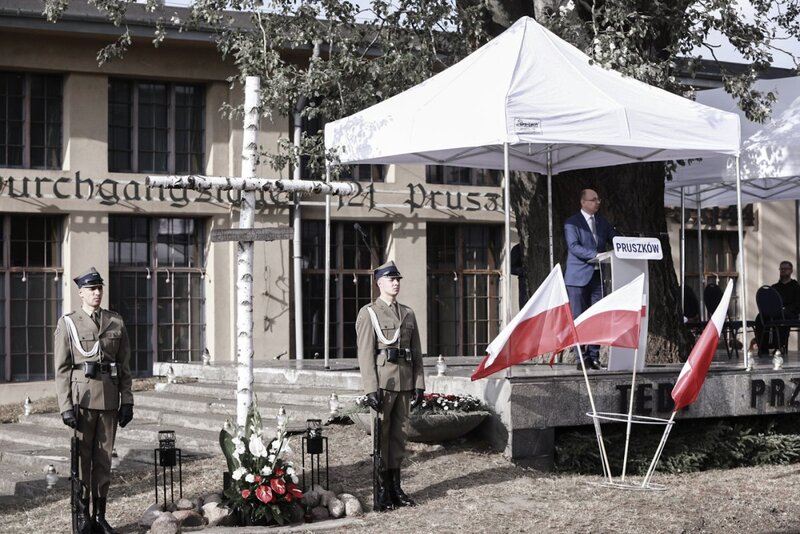 IThe commemorative events have been organized by the Pruszków Poviat, the City of Pruszków, the Institute of National Remembrance, the Office for War Veterans and Victims of Oppression and the Dulag 121 Museum.

This year's celebrations will began at noon at the Hospital Cemetery in Tworki where flowers will be laid under the plaque commemorating prisoners of the Dulag 121 transit camp, Warsaw Insurgents and civilian victims. At 1:00 p.m. flowers commemorating the deceased and fallen nameless prisoners of the Durchgangslager 121 transit camp buried in the mass grave were laid at the main gate of the Żbikowski cemetery. The official celebrations bagan at 2:00 with a field Mass at the monument „Tędy przeszła Warszawa” [This is where Warsaw passed] in the former Durchgangslager 121 camp in Pruszków, and ended with a concert of patriotic songs performed by the Polish Army Orchestra.

During occasional speeches, the Deputy President of the Institute of National Remembrance, Mateusz Szpytma, Ph.D. emphasized the significance of the enormous sacrifice on the part of the civilian population of Warsaw. He also referred to the Institute's initiatives regarding the Dulag 121 camp:

- Last year, on the Day of Remembrance of the Dulag 121 Camp Prisoners and those who Aided Them , the Institute of National Remembrance funded a plaque commemorating those who lost their lives in the camp - recalled Mateusz Szpytma. - This year, the Institute has prepared an extensive expert opinion changing the prevailing view on the status of the Dulag 121 camp in Pruszków and the ordeal of the civilian population. Next year, the IPN will publish a book on the topic.

Thanks to the expert opinion prepared by the IPN and an application submitted to the Office for Veterans and Victims of Oppression, the surviving prisoners of the Dulag 121 transit camp have just received veteran rights.

- It was the civilian population who suffered the most during and after the fall of the Warsaw Uprising - emphasized the Deputy President of the IPN. - It is estimated that 400-450 thousand expelled residents of Warsaw and neighboring towns passed through the transit camp in Pruszków. The living and sanitary conditions there were terrible. In a note of 28 August 1944, the Minister of Foreign Affairs of the Polish Government-in-Exile, Tadeusz Romer, stated: "The conditions in Pruszków are far worse than anything that was known so far about German concentration camps." Although most of the expelled were found incapable of work and were sent to the General Government, entire families were separated as a result of brutal selections. Hence, minors under the age of 14 were sent to concentration camps and forced labor facilities. Those suspected of participating in the Warsaw Uprising were executed, among others, in Piastów at the Paper Mill, at the clay pits near the Potulicki brickyard and on Hoser's clay pits in Żbików. As a result of the selection, 70,000 of the expelled were sent to concentration camps, and 150,000 to forced labor. A total of at least 40% of all those expelled to Pruszków went to places where they were subjected to further direct and indirect extermination.

- This place is calling - it is calling out to the world to remember who the victims and the perpetrators of these crimes really were. It cries out for compensation for the victims. We are here to make sure this calling reverberates and we will do it constantly, not only every 2 October  - concluded Mateusz Szpytma.

During the ceremony, Małgorzata Bojanowska was honored with the "Pro Patria" Medal for her special contribution to the cultivation of the memory of the fight for the independence of the Republic of Poland.

By organizing the celebrations of the Day of Remembrance of the Prisoners of Camp Dulag 121 and those who Aided Them, we would like to pay tribute to the Insurgents and, above all to commemorate the Civilian Population of Warsaw, who between August and October 1944 died in mass executions and bombings, went through the drama of expulsion, as well as those who often risking their lives, helped them selflessly. The inhabitants of the capital, who were deprived of their homes and belongings during the exodus, were sent to transit camps, from where they were deported to work in the Third Reich, deep into the General Government and to concentration camps. For most of them, the first stage of their wandering was Dulag 121 - a transit camp for civilians established in Pruszków on 6 August 1944. It is estimated that as many as 650,000 people passed through the Pruszków camp. About 150,000 people were sent to forced labor in the Third Reich, and another 350,000, deemed unfit for work, were sentenced to wandering around the territory of the General Government, where their survival depended on the help of the inhabitants of towns and villages. In turn, as many as 70,000 prisoners of the transit camp in Pruszków were sent to extermination camps. In this difficult time, the inhabitants of Pruszków and the surrounding towns set out to help the expelled Warsaw residents. Thousands of people supported the prisoners at that time, organizing medical and financial aid and food within the camp and outside its walls. Thanks to them, about 100,000 people were able to move out - legally or illegally - from the camp in Pruszków.

It is worth recalling that the annual celebrations of of the Day of Remembrance of the Prisoners of Camp Dulag 121 and those who Aided Them are a tradition started by railwaymen working on the premises of the Rolling Stock Repair Works. Since 1990, the celebrations have been held at the monument "This is where Warsaw passed". Since the establishment of the facility, the Dulag 121 Museum has been co-organizing these celebrations together with local governments.