The ceremony was attended by President of the Institute of National Remembrance Karol Nawrocki, Ph.D., and his deputy Krzysztof Szwagrzyk, Ph.D., D.Sc. 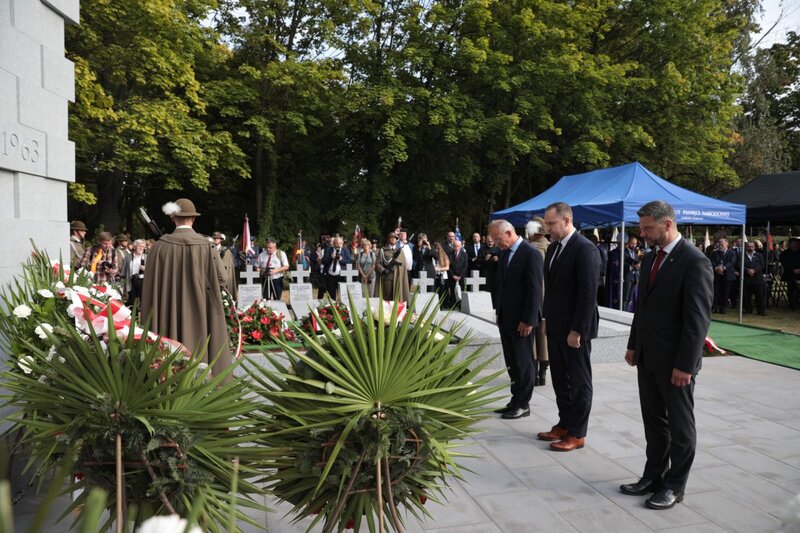 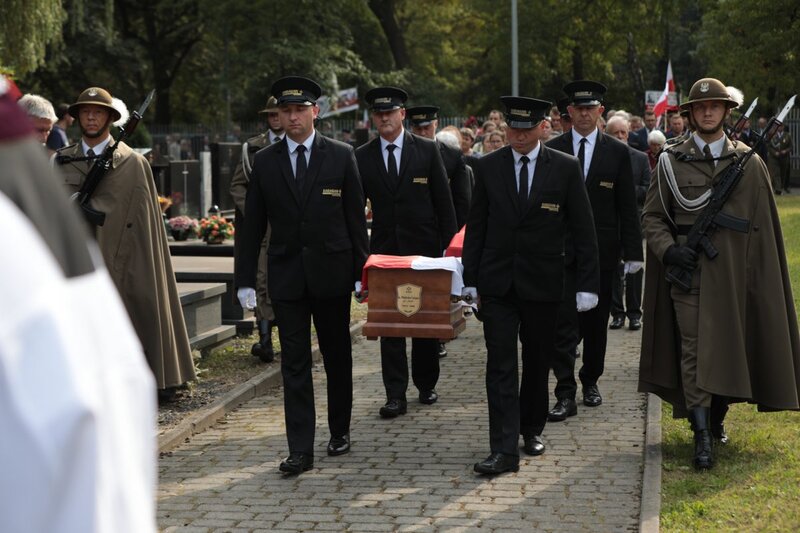 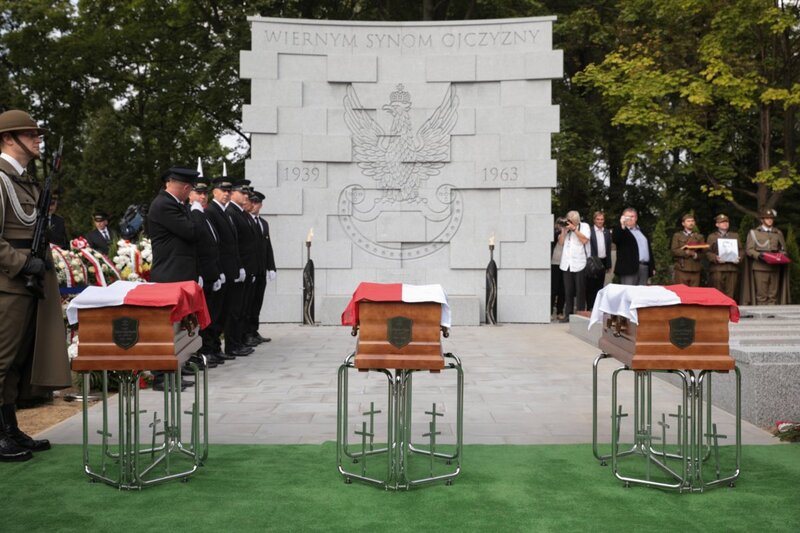 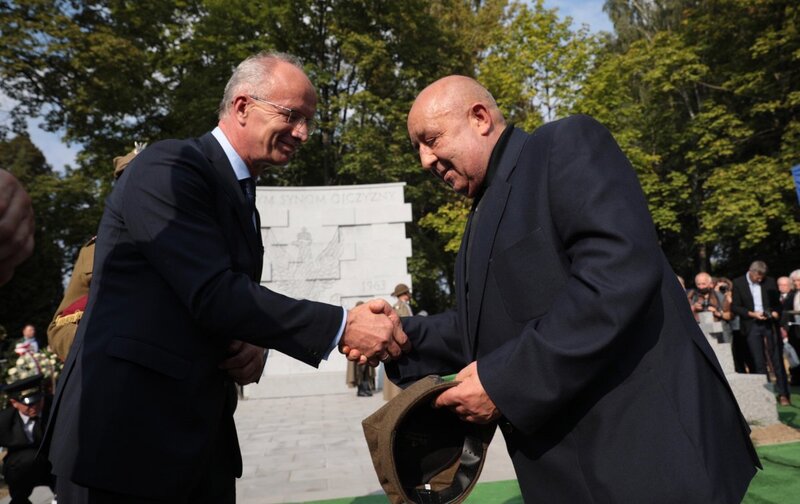 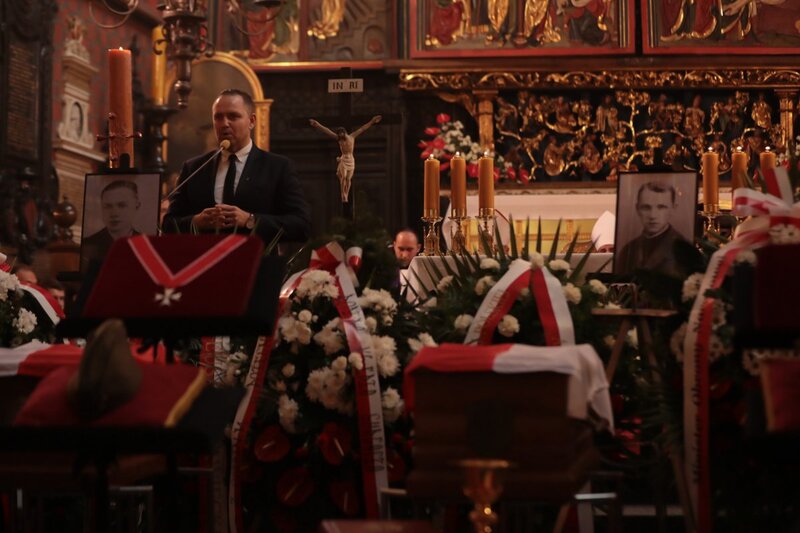 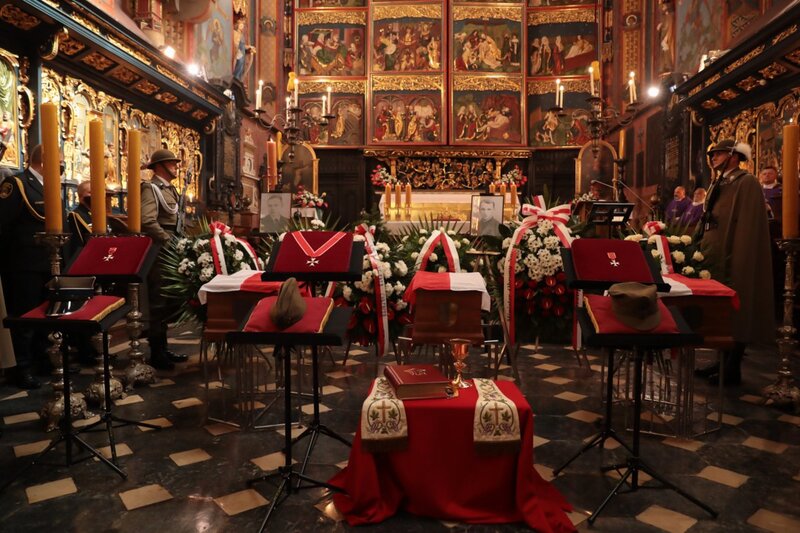 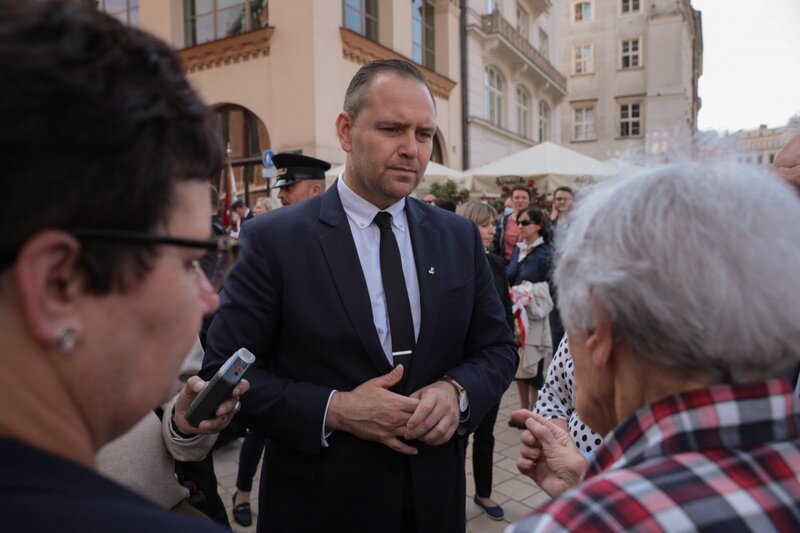 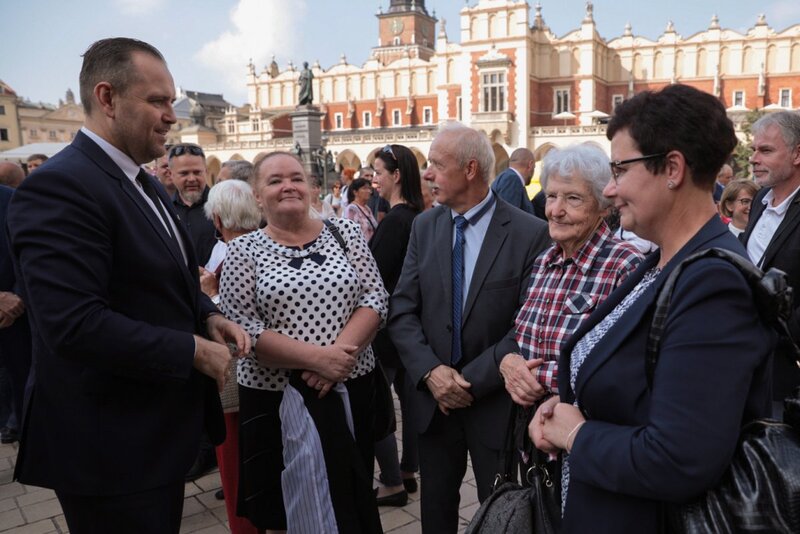 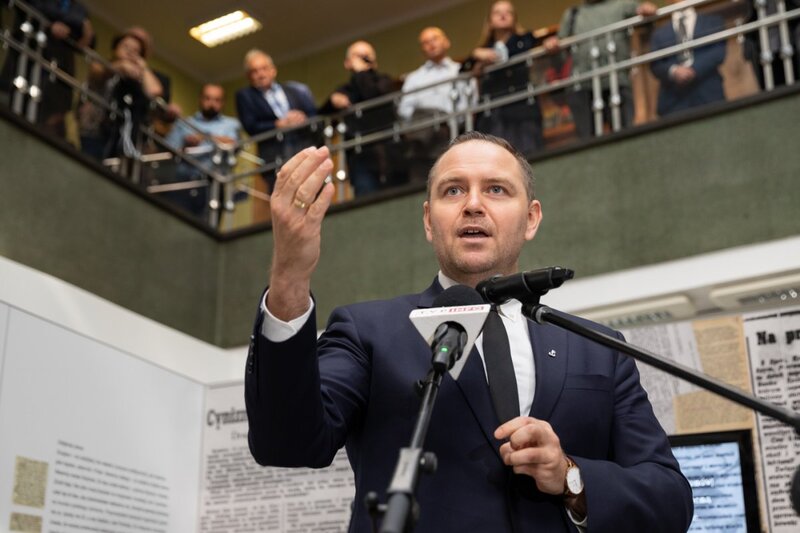 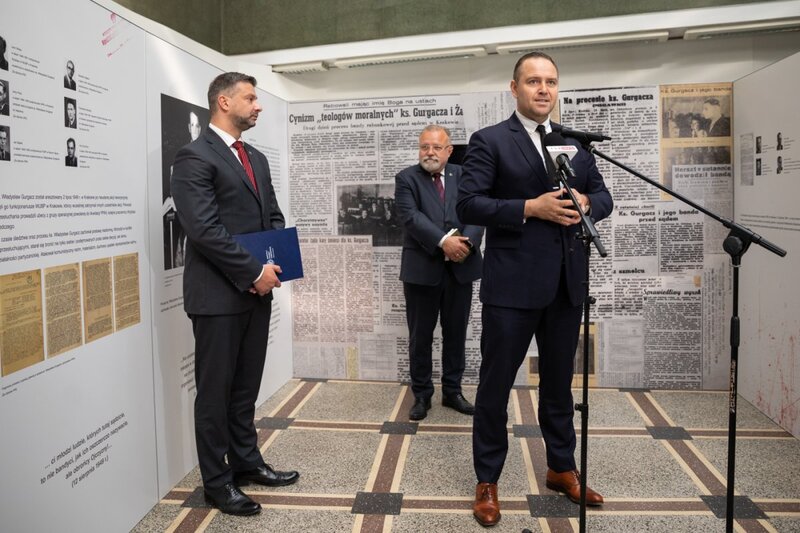 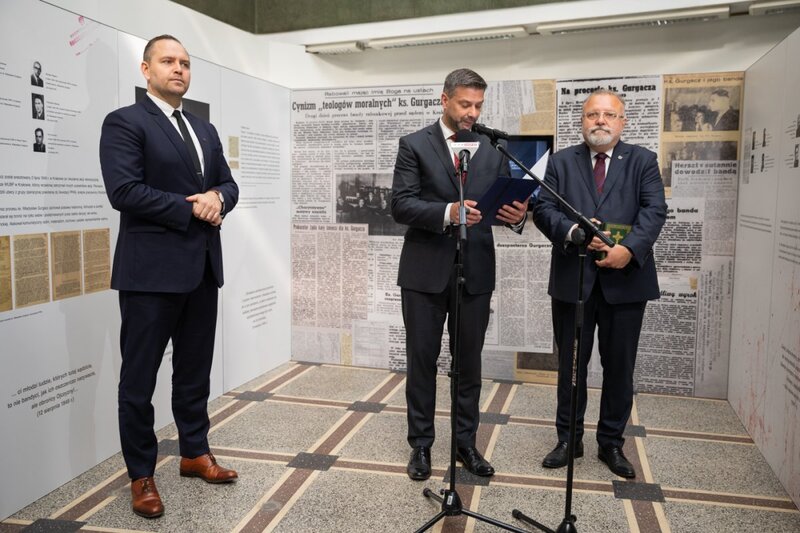 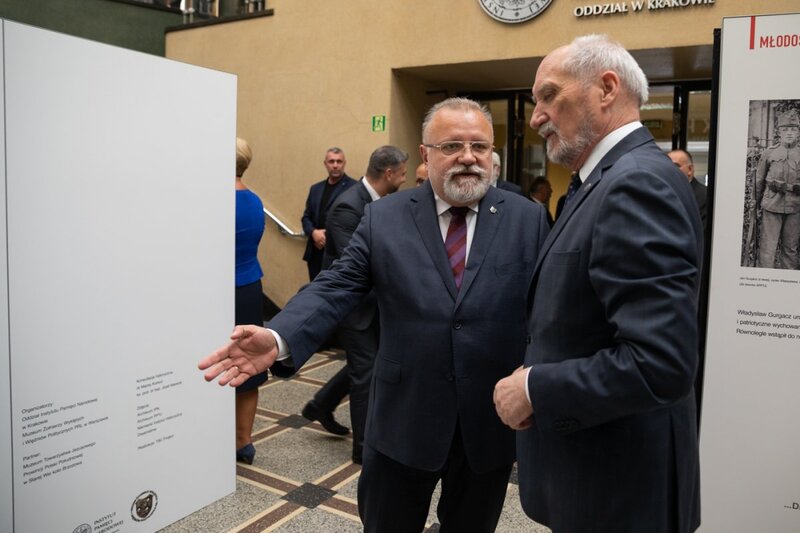 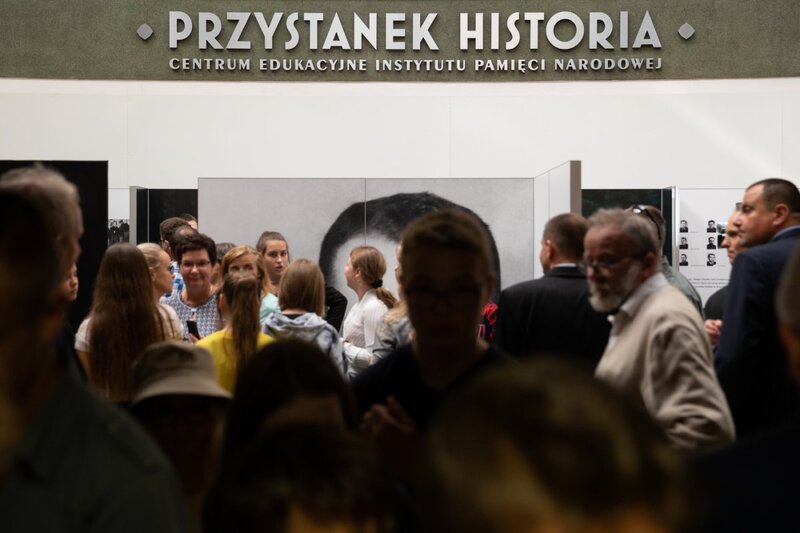 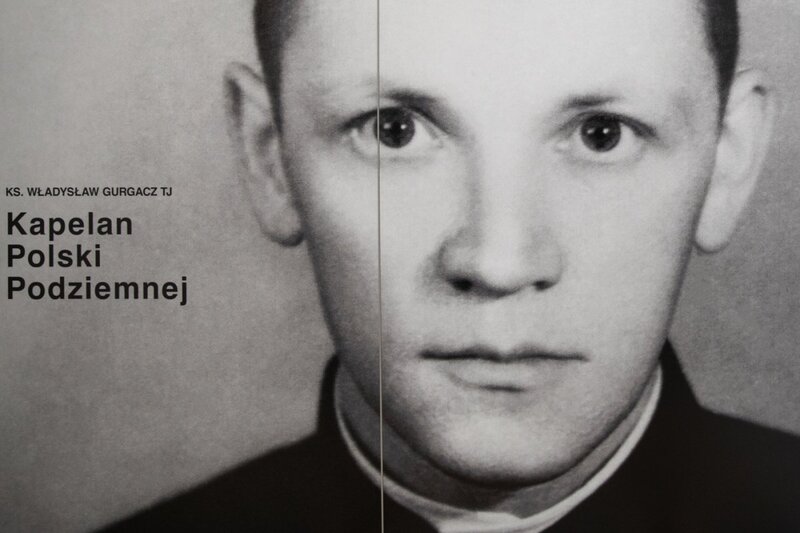 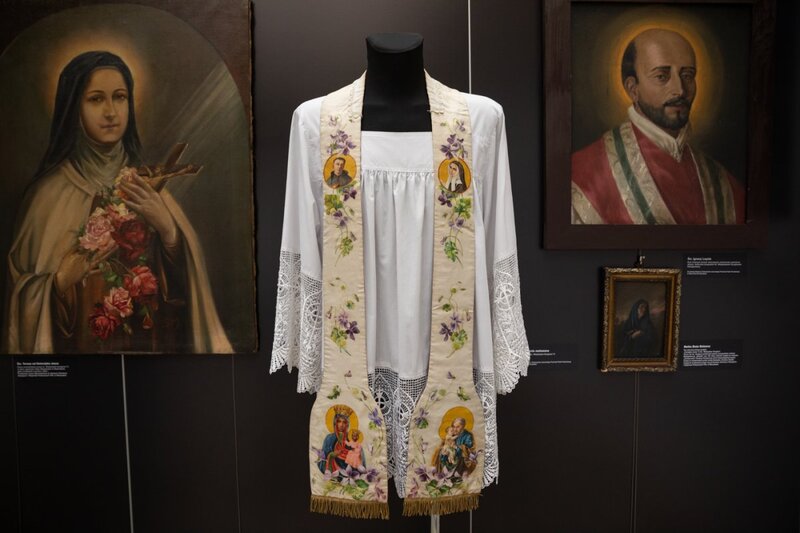 A solemn funeral mass was concelebrated at St. Mary's Basilica in Cracow. After the service, the funeral procession moved to Rakowicki Cemetery where the ashes of the three Cursed Soldiers were interred with military honors.

The remains of Fr. Władysław Gurgacz "Sem," Ryszard Kłaput "Pomsta," and 2Lt Tadeusz Zajączkowski "Mokry" were found in 2017-2018 by the IPN’s experts on the grounds of Rakowicki Cemetery in Cracow.

"I wish I could have been their friend," said Karol Nawrocki, the President of the IPN "because it is a great honor to be friends with people whose blood laid the foundation for free and independent Poland . . . Their choices brought them repressions, prison, brutal interrogation, and, finally, death."

The IPN's head added, "Not only were you murdered, but an attempt was made to erase you from the nation's memory; yet, today is a proof that free Poland won't let you be forgotten."

Prior to the funeral ceremony, the exhibition, titled "Fr. Władysław Gurgacz – Chaplain of Underground Poland" was inaugurated at the IPN’s Educational Center in Cracow. It was prepared by the IPN’s Cracow Branch and the Museum of Cursed Soldiers and Political Prisoners of the Polish People's Republic in Warsaw.

The exhibition features paintings and artifacts related to Fr. Gurgacz from the collections of the Museum of the College of Jesuit Fathers in Stara Wieś near Brzozów and the Museum of Cursed Soldiers and Political Prisoners of the Polish People's Republic in Warsaw. The exhibition will be on display until the end of October 2021.

In 1945, the power in Poland and all Central Europe was taken by barbarians who planned to kill and erase God from public consciousness; these barbarians aimed to replace God with Karl Marx - as blasphemous as it sounds - and install Vladimir Lenin in place of Jesus Christ.

Such were the signs of the times, and, having understood that, Father Gurgacz couldn't afford to be anywhere else but in the place where he uplifted hearts and raised spirits of the people confronting the Soviet barbarism. That's what Poland and the IPN are grateful for.

A new quarter at Rakowicki Cemetery

The plot will be the resting place for the remains of the soldiers of the Polish resistance who were killed in a fight against the German and Soviet occupants or were murdered in a time of repression and during other crimes. It was financed by the Institute of National Remembrance and built in cooperation with the Małopolska Province Governor, the Board of Municipal Cemeteries in Cracow, and the Cracow City Council. 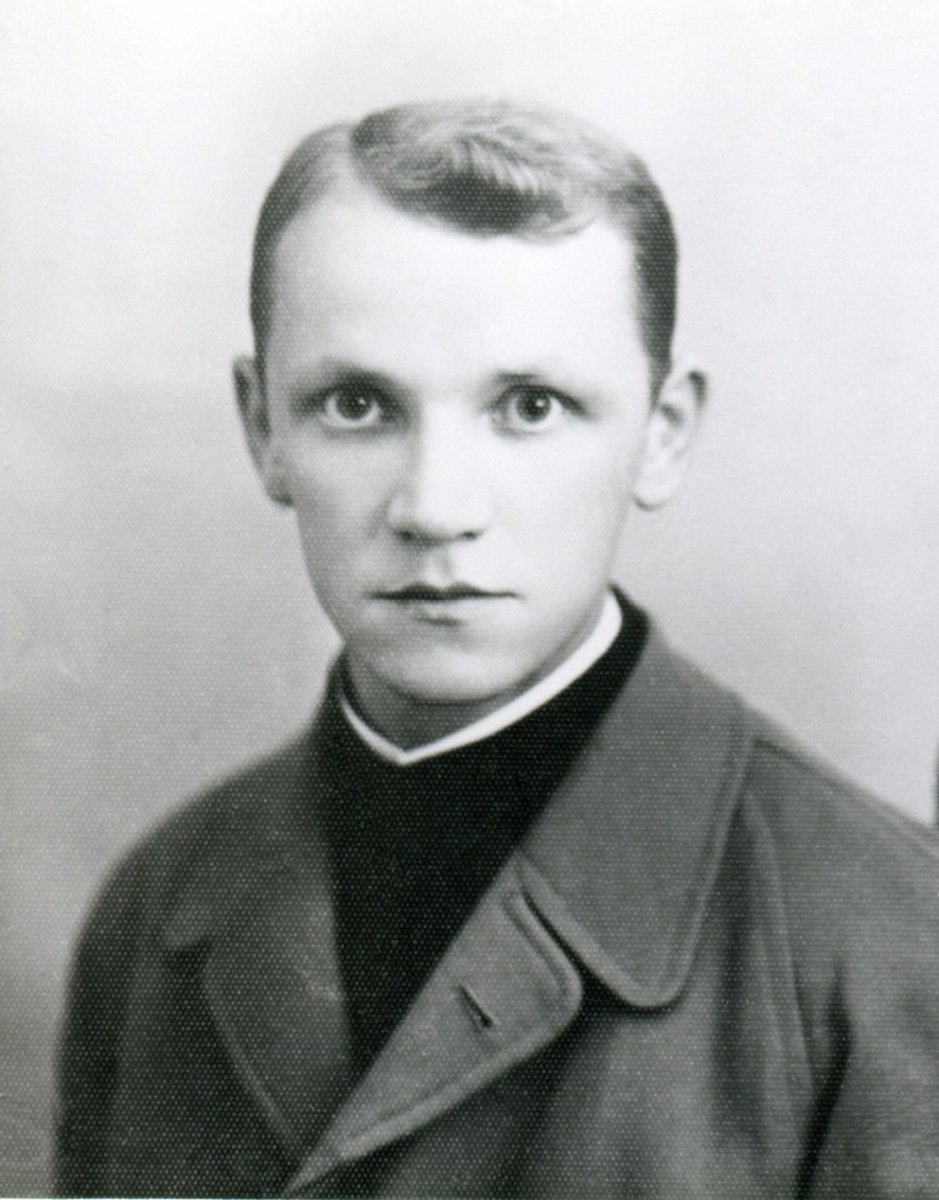 He was born on 2 April 1914. At the age of 17, he entered the Jesuit novitiate in Stara Wieś near Brzozów. Then, he continued his education in Pinsk, Polesie Province.

In 1937, he settled in Cracow where he began philosophical studies. During the war, he continued his studies in philosophy and theology. In August 1942, he was ordained a priest in Jasna Góra. In the spring of 1945, he found himself in Gorlice, where he worked as a hospital chaplain. Then, he was transferred to Krynica. He became known as a committed priest.

After the war, Fr. Gurgacz spoke out more and more forcefully on social issues. He especially emphasized the discrepancies between the teachings of Christ and the communist reality. This is probably why there were two attempts to assassinate the priest. Then, Fr. Gurgacz decided to escape from his place of residence and join the anti-communist resistance. Father Gurgacz was to provide spiritual care for the partisans and most of all to make sure that their activities did not contradict the principles of Catholic ethics. The soldiers called him "Father", and the priest took the pseudonym "Sem".

In the spring of 1949, it turned out that his unit had almost no resources left to continue its activities. It was also plagued by more and more frequent raids mounted by the Internal Security Corps and the Security Service. When the partisans from his unit were caught by the communists, he turned himself in. Sentenced to death in a show trial on 14 August 1949, Father Władysław Gurgacz was executed a month later at Montelupich prison in Cracow. The Chaplain was secretely buried at Rakowkicki Cemetery in Cracow. His remains were found by the IPN’s experts in October 2018. 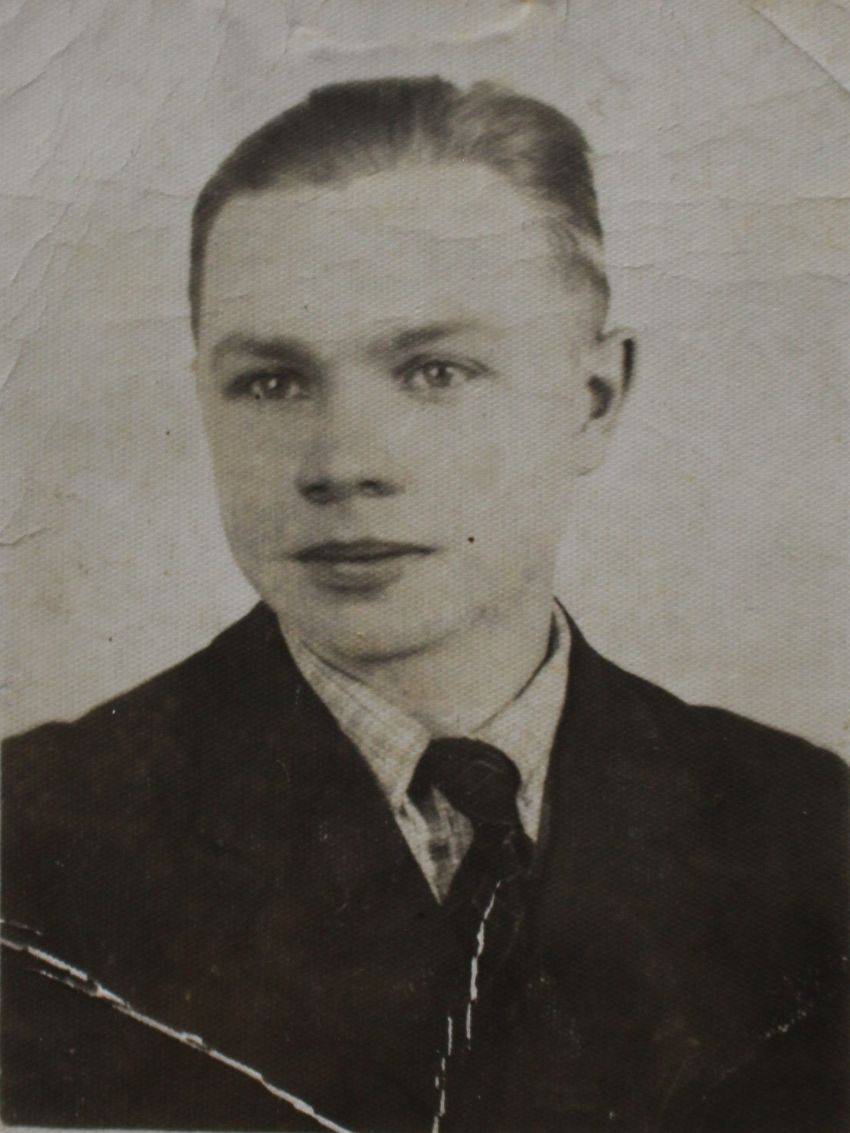 He was born in Lviv on 1 January 1924. His father was a soldier of the Polish Army. Still before the war, the Zajączkowski family moved to Wadowice and then to Gorlice.

In 1942, Zajączkowski was referred to forced labour in Germany, but managed to escape. The same year, his father and oldest brother were shot by the Germans in Gorlice. During this time, Zajączkowski was in hiding and later joined the Home Army. After its dissolution in 1944, he found himself in Lublin, where he enlisted in the army, graduated from the Communications Officers School in Zamość, and was assigned to the 1st Motorized Infantry Brigade as a second lieutenant, and then to the 4th Armored Brigade as a platoon commander. He fought against the Germans in the area of the Nysa Łużycka River and distinguished himself in the Battle of Niesky in April 1945. Zajączkowski received several decorations for valor. He was demobilized in the spring of 1946.

In the summer of 1946, he joined a Polish anti-communist partisan unit led by Stanisław Marek "Orlicz", which operated in the area of Maków Podhalański.

Arrested on 25 August 1946, wounded, he tried to escape twice without success. He was sentenced to death in Cracow on 29 September 1946. "Mokry" was executed on 21 October 1946, at Montelupich prison in Cracow. Tadeusz Zajączkowski's remains were secretly buried at Rakowicki Cemetery, where they were found in October 2017. 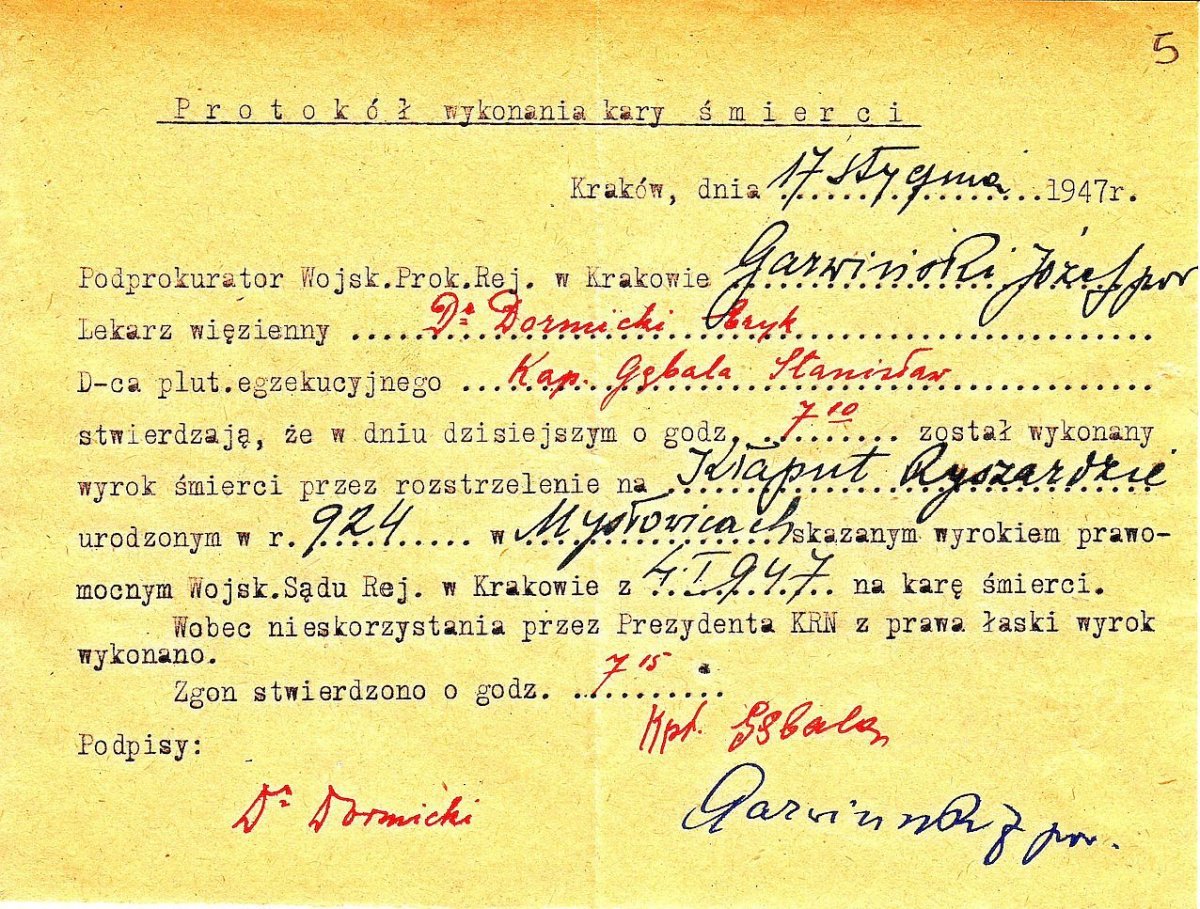 He was born in Mysłowice, Province of Silesia, on 4 April 1924. In youth, he was active in the scouting movement.

In January 1940, he was arrested and deported to Germany – as he later claimed, he was sent to a concentration camp for refusing to sign the Volksliste. He escaped and worked on a German farm. In 1945, he returned to Poland.

After the war, he lived in Katowice and later moved to Cracow. In the autumn of 1946, he joined the "Błyskawica" Polish Partisan Group led by Major Józef Kuraś "Ogień".

Arrested in November 1946, "Mokry" was interrogated by the officers of the Internal Security Corps and the Security Service. On 4 January 1947, Ryszard Kłaput along with Wojciech Frodyma and Tadeusz Kościelniak were sentenced to death. President Bolesław Bierut did not pardon them.

Ryszard Kłaput was shot by a firing squad in Cracow 13 days later. He was secretely buried at Rakowicki Cemetery. His remains were found by the IPN’s experts in October 2018.