PRESS RELEASE: the IPN’s press briefing - Office of Search and Identification on further exhumations in the "Toledo" prison

On 15 July, the Institute of National Remembrance held a press briefing on the next stage of exploration and exhumation work in the former 3rd Warsaw Penal and Investigation Prison (the so-called "Toledo") in Namysłowska Street. The briefing took place by the housing estate garages. 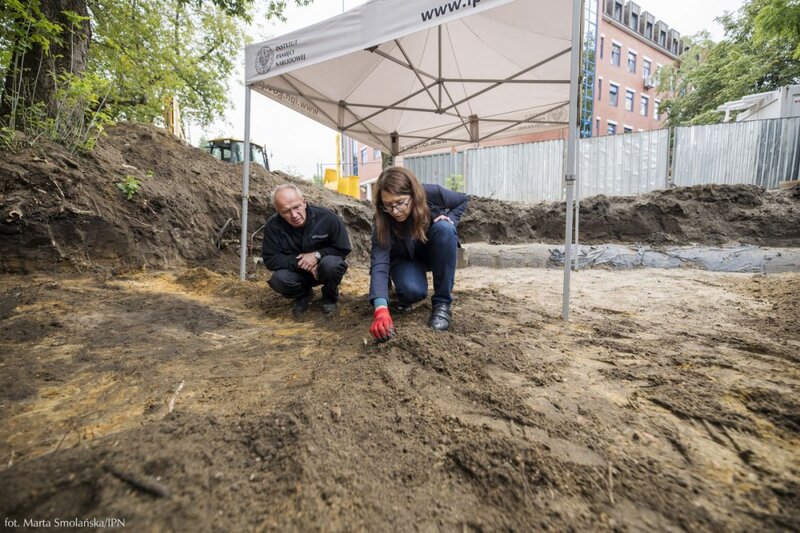 The Office of Search and Identification of the Institute of National Remembrance has been exploring the grounds of ​​the former "Toledo" prison since last autumn. So far, the remains of 20 people have been unearthed; the last of the discovered, a man aged 35-45, was buried without a coffin in a small, nameless grave under layers of rubble and asphalt.

We have started the next stage of exploration works in the former "Toledo" prison in Warsaw's Praga district. We worked here last year and this year, finding the remains of 19 people. At the moment, we are standing in front of the place where the remains of another person have been found. The outlines of subsequent burial pits have been revealed. We still have over a week of work ahead of us. We will explore the area of ​​the former prison garden, right next to the old fragment of the wall. We can promise you that – as always – until the entire area has been thoroughly explored, we will not call it a day,

said the head of the Office of Search and Identification last week, when the work was in progress.

Having examined the rest of the area, the IPN’s archaeologists found at least two more burial pits, and in the future, other secret graves are likely to be revealed. In the current stage, the Office experts are aiming to explore the ground between and under the garages, built here in later years. The area adjacent to the remaining sections of the prison wall was part of the garden, where, witnesses say, the bodies of the deceased and murdered inmates were buried as well.

We are today in Namysłowska Street in Warsaw Praga district. This part of the grounds was once known as a prison garden, where, for years after the war, the inmates imprisoned in the building that no longer exists grew vegetables. However, we learned from credible accounts that it was also a burial place for victims of the communist system. That’s what the prisoners told us.

We will do our best to explore the whole of this area by the end of this year or next spring. Only then can we determine that there are no more human remains in the ground. That's what we're here for. Considering how many victims the communist terror claimed and how many people were executed and died here – bear in mind that Soviet units, such as Smersh, plus the NKVD and Security Office were based nearby – we believe that plenty of dreadful secrets were buried on the site. We're here to uncover them all.

The "Toledo” Penal and Investigation Prison was a facility of the NKVD and Polish Security Office, operating from the moment the Soviet forces first entered the Praga district of Warsaw in the autumn of 1944, until 1956. It was used to detain soldiers of the Home Army, National Armed Forces and other political prisoners considered dangerous to the new rule by the Stalinist regime. The facility, which became the place of execution for many members of the independence underground, was considered the harshest of its kind.

Entry by car is possible from the Namysłowska Street (coming from the direction of the Ratuszowa Street, pass the monument and turn right into the alley before the street market). The briefing will be streamlined on the Search and Identification Office Facebook page: https://www.facebook.com/poszukiwaniaipn/

For more information, contact Tomasz Trzaska of the IPN's Search and Identification Office: 504 535 111.