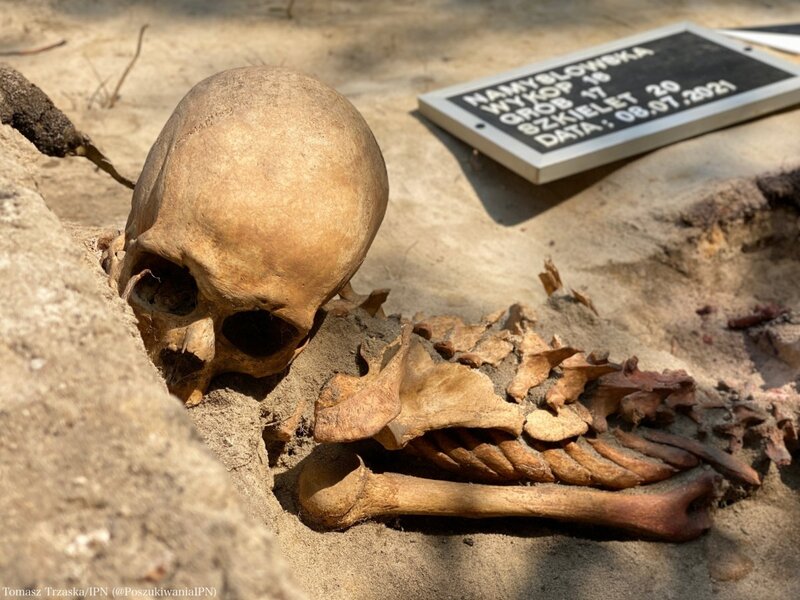 In the first week of the third stage of exploration works being carried out at the Warsaw III (Toledo) Prison - the communist detention and interrogation centre in Namysłowska Street in Warsaw’s Praga District – the IPN’s Office of Search and Identification – a team of experts searching for burial places of victims of totalitarian regimes and ethnic cleansing in the years 1917–1989 – has unearthed the remains of a man. His body was buried without a coffin, in a small burial pit. These have been the 20th remains revealed on the prison grounds so far.

The IPN’s Office of Search and Identification is examining other accessible areas once belonging to the prison plot or directly adjacent to it. In the spring of 2020, during works carried out in the area of what ​​today is a housing estate, the IPN’s archaeologists secured the remains of three people buried without a coffin. In the subsequent stage of works (September 2020), the Office conducted search activities in the areas adjacent to the estate (including the plot belonging to a military unit), during which the remains of another 16 people were revealed. In the spring of this year the works continued and resulted in the finding of the remains of two more people buried directly under the wall of the former prison. The remains of one more person were discovered a few meters away from the prison wall. The aim of the ongoing stage of works is to conduct a thorough examination of the area where the former garages are located. A layer of asphalt and rubble needs to be removed in order to carry out the works.

According to a preliminary anthropological assessment, the remains discovered today belong to a man aged 35-45. He was buried without a coffin, in a small burial pit. The arrangement of the remains may indicate that the body was carelessly thrown into the pit. More pits, possibly containing the remains of other people, have been discovered nearby.

Prof. Krzysztof Szwagrzyk, the Deputy President of the Institute of National Remembrance and the Director of the IPN’s Office of Search and Identification, said: We have started the next stage of exploration works in the former "Toledo" prison in Warsaw's Praga district. We worked here last year and this year, finding the remains of 19 people. At the moment, we are standing in front of the place where the remains of another person have been found. The outlines of subsequent burial pits have been revealed. We still have over a week of work ahead of us. We will explore the area of ​​the former prison garden, right next to the old fragment of the wall. We can promise that - as always - until the entire area has been thoroughly explored, we will not call it a day! We believe that we will reveal not only the remains which have been discovered today, but that there will be more of them.

The current stage of works is scheduled for 16 July.

The Warsaw III (Toledo) Prison  was a Security Service and the NKVD prison, functioning from the moment  Soviet troops entered  Warsaw's Praga district  (1944). It was intended for soldiers of the Home Army, the National Armed Forces and other political prisoners whom the Stalinist regime considered particularly dangerous for the new authorities. The prison, considered by the prisoners as the most harsh,  existed until 1956. Executions on many members of the pro-independence underground were carried out within its walls.