The IPN Archive would like to extend its invitation to the official opening of the #StolenMemory exhibition - Warsaw, 14 June 2021

The official opening will take place at 11:00 a.m., at the House of the Polish Diaspora of the "Polish Community" Association 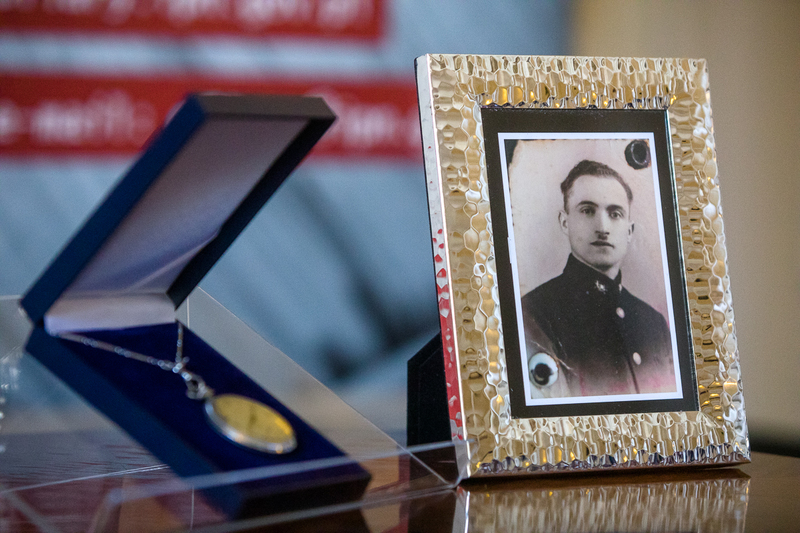 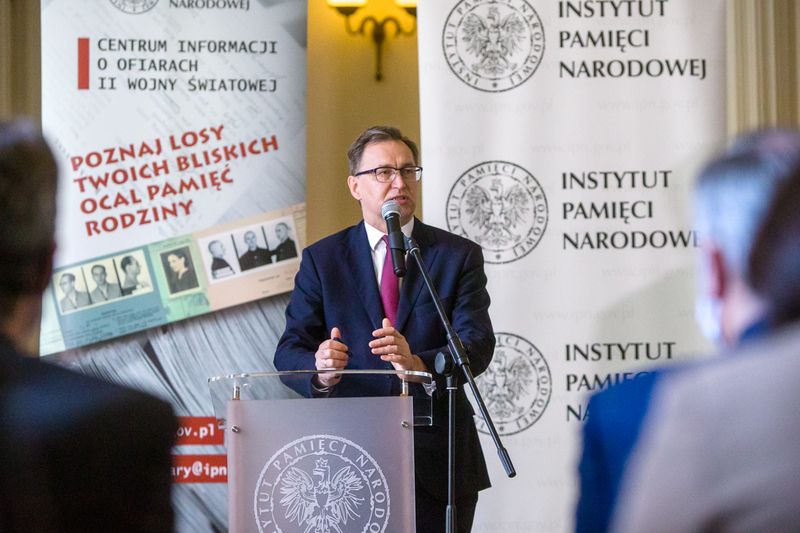 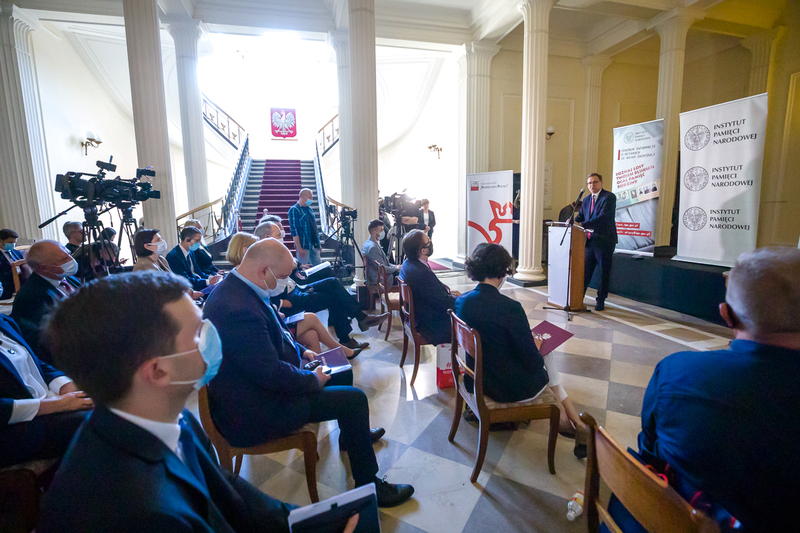 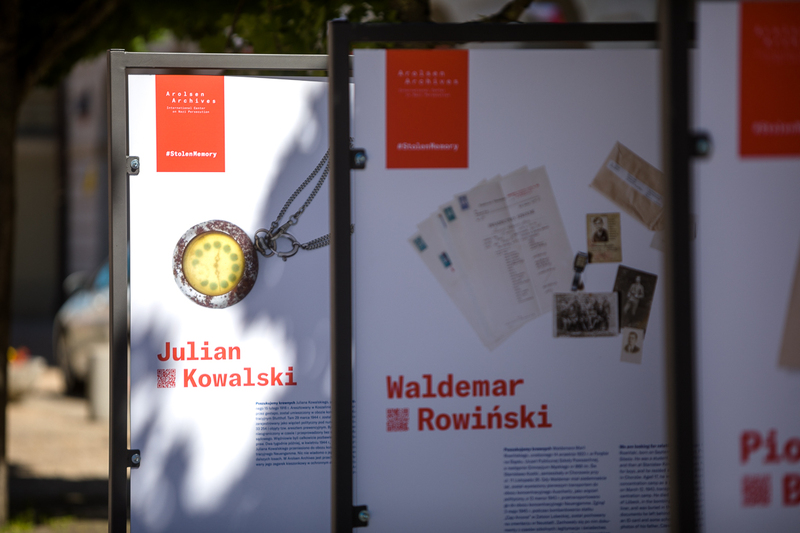 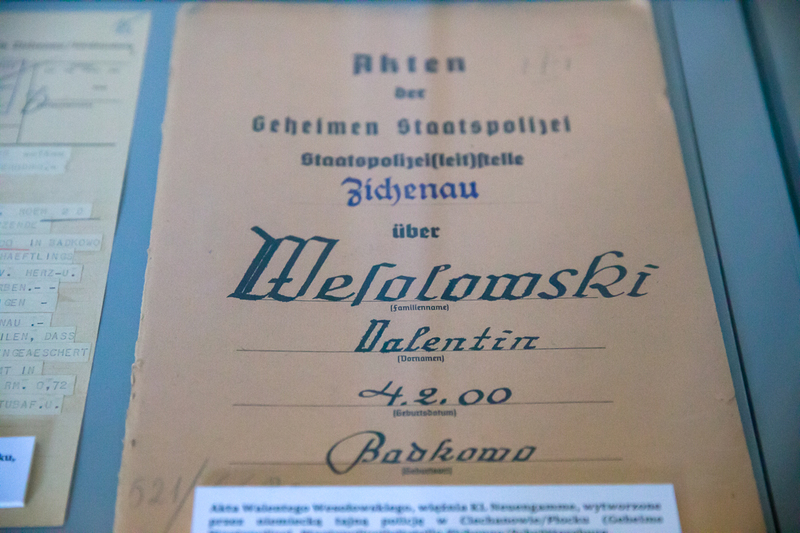 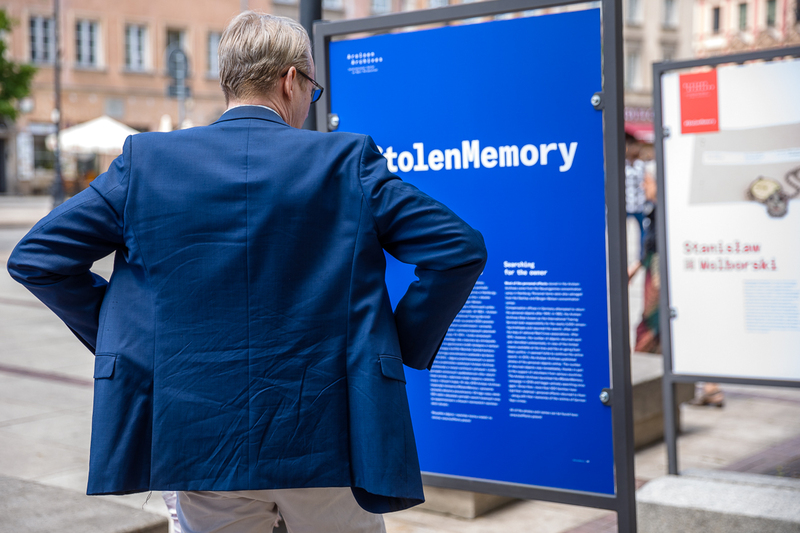 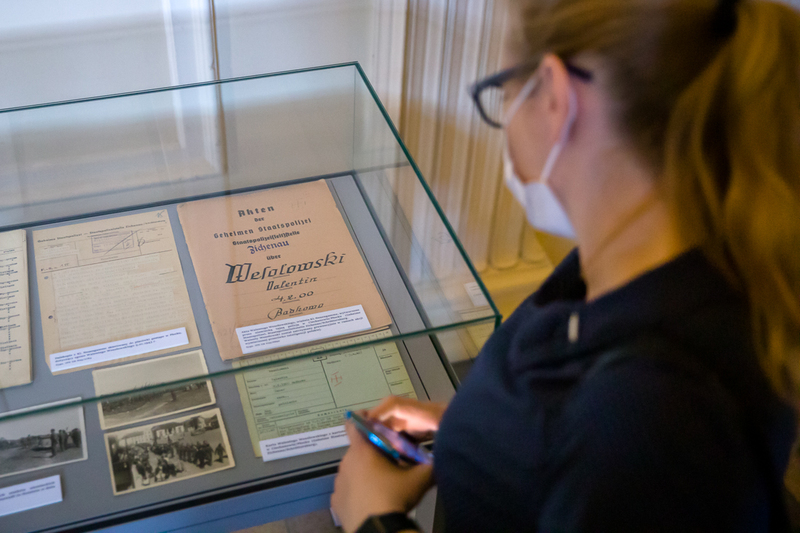 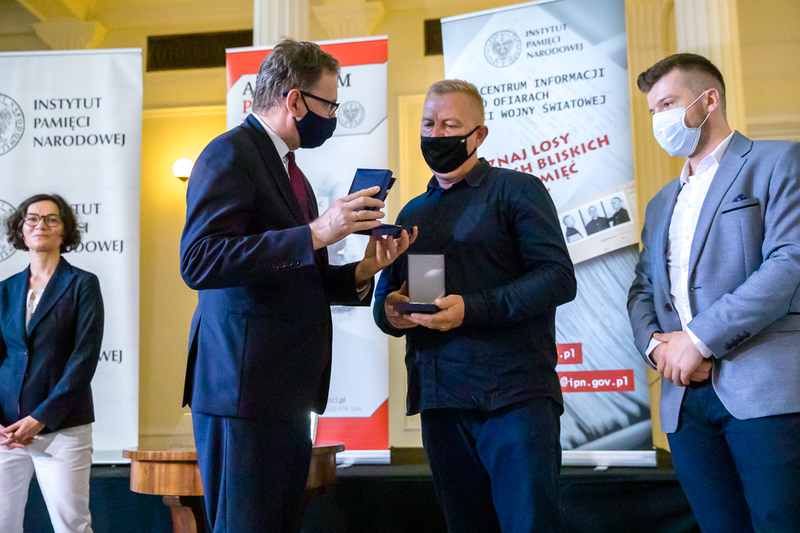 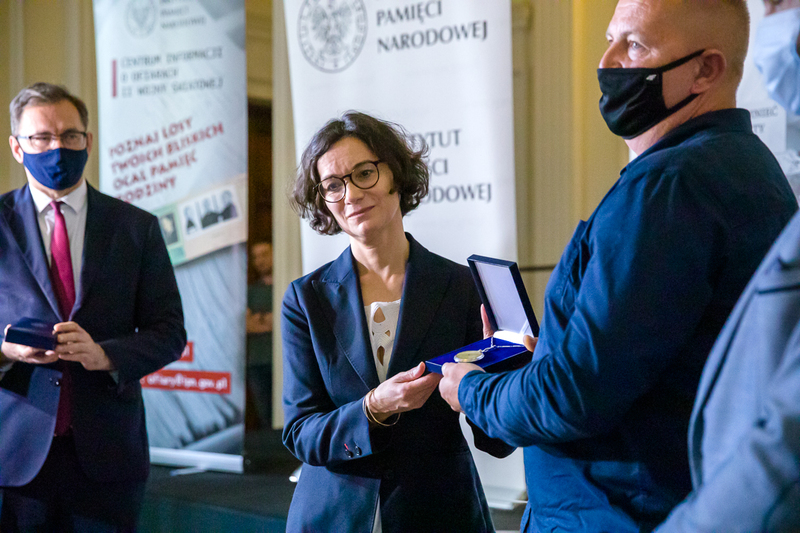 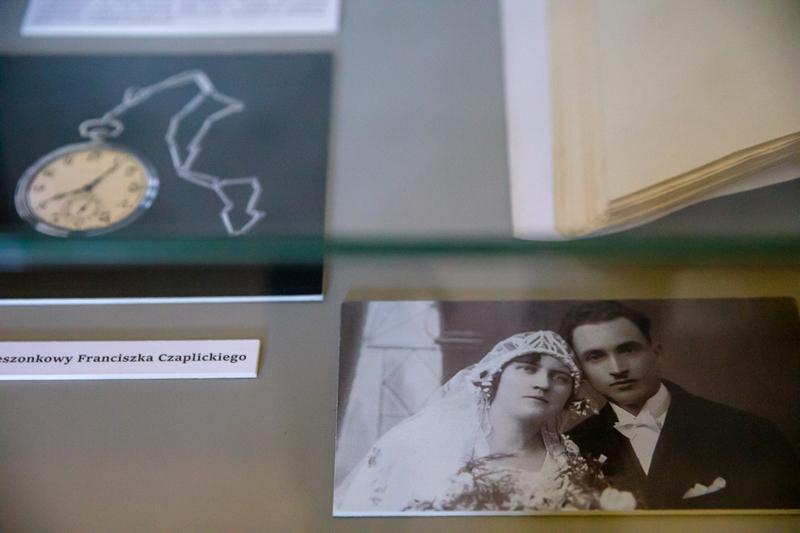 Thanks to the efforts of the Institute of National Remembrance, a pocket watch that belonged to a prisoner of Stutthof and Neuengamme concentration camps will be returned to his granddaughter; Franciszek Czaplicki's descendant will collect it on 14 June 2021, at an official ceremony due to begin at 11 o’clock at the House of the Polish Diaspora of the "Polish Community" Association at 64 Krakowskie Przedmieście Street in Warsaw.

Returning the watch to Małgorzata Wrotna and a representative of the family Kamil Kaczyński will coincide with the opening, at the same time and venue, of an exhibition that is part of the "StolenMemory" project. Both events will be attended by the President of the Institute of National Remembrance, Jarosław Szarek, PhD, the director of the IPN Archive Marzena Kruk, and the director of the Arolsen Archives Floriane Azoulay. After the ceremony, Franciszek Czaplicki’s family, as well as representatives of the IPN Archive and Arolsen Archives will answer questions from the media.

The ceremony is taking place on a special day, because on 14 June 1940, the first transport of Polish political prisoners was brought to the German concentration camp of Auschwitz. Among these first inmates were members of the Polish elite: activists of political, underground and social organizations, civil servants, scouts, secondary school graduates and representatives of Polish intelligentsia.

One of them was an outstanding Polish skier and Olympic Games participant Bronisław Marusarz. Another one, Stanisław Ryniak, was registered as number 31, thus becoming the first Polish political prisoner of Auschwitz (numbers 1 to 30 had been assigned to German criminal prisoners from the Sachsenhausen concentration camp in the German Reich, transferred to Auschwitz as block elders and capos). 349 was the number of Bronisław Czech – 24-time Poland’s ski champion, as well as competitor in the world championships and the Olympic Games. He had been arrested for underground work, but that didn’t deter him from joining the resistance organization that Cpt. Witold Pilecki set up in the camp. Czech died in Auschwitz on June 5, 1944.

Following a 2006 Act of Parliament, on June 14 we have been commemorating the National Day of Remembrance for the Victims of the German Nazi Concentration and Death Camps. This year’s event, attended by the Deputy President of the Institute of National Remembrance Mateusz Szpytma, PhD, will take place on the premises of former Auschwitz I camp. It will begin at 10 o’clock with a Holy Mass at the St. Maximilian Center in Harmęże.

More about the #Stolen Memory project by the Arolsen Archives.

#StolenMemory is a campaign organized by the Arolsen Archives in Bad Arolsen and supported by the Institute of National Remembrance. The purpose of the exhibition is to find families and return personal effects belonging to the victims of the repressions carried out by the Third Reich, thus popularizing knowledge about the millions of people who lost their lives in German concentration camps. These personal effects are of great value to families and are often the only preserved objects belonging to their relatives.

The Arolsen Archives in Germany hold about 2,500 personal effects, the Effekten collected in concentration camps. These include: pocket watches, wrist watches, rings, wallets, family photos and everyday objects such as combs, powder compacts or shaving utensils, etc. They were often the last things that victims of German repressions had on them when they were arrested. They belonged to people from more than 30 countries, in many cases from Poland and the former Soviet Union.

After 1945, the search offices in Germany made an attempt  to return these belongings.In 1963, the Arolsen Archives (called at that time the International Tracing Service) assumed the responsibility for almost 5,000 additional envelopes with personal objects and resumed the searches, often with the help of national Red Cross branches. After 1974, the number of items returned decreased significantly each year. Due to the limited resources available at that time and the ongoing East-West conflict, continuing search activities seemed pointless.

The turning point came in 2015, when the Arolsen Archives published photos of the personal effects stored in their collection in a new digital archive. Owing to the power of the media and the support of volunteers from different countries, the number of effects returned to the victims’s families increased immediately. In 2016, the Arolsen Archives launched the #StolenMemory campaign and recommenced active searches. Since then, around 500 families have received the effects of their relatives, thus regaining the memory of the victims of Nazi crimes.

The Institute of National Remembrance began close cooperation with the Arolsen Archives as early as in 2007, when the IPN was provided with a copy of the largest electronic database of digitized documents about people repressed by the Third Reich, thus becoming one of very few institutions with access to the Arolsen Archives application. The Centre for Information on the Victims of World War II, operating within the IPN Archive, contributed to the further strengthening of cooperation between the two institutions. The Center conducts research and provides information on the basis of electronic databases and a unique archival resource collected by the former Main Commission for the Investigation of Nazi Crimes in Poland. The activities of the Center are associated with many discovered stories that were previously unknown to families, as well as the implementation of many projects aimed at restoring the memory of the victims of World War II.

The #StolenMemory exhibition by the Arolsen Archives includes 12 display panels presenting the fate and personal effects of 13 concentration camp prisoners whose relatives are still being searched for. There are also biographies of three prisoners whose items were returned to their families, and information posters presenting the essence of the project and important events from World War II. Additionally, the exhibition is accompanied by a board dedicated to the promotion of the IPN’s Centre for Information on the Victims of World War II. The exhibition has been prepared in Polish and English language versions. The exhibition will be presented in several of the IPN’s branches and sub-branches.

Franciszek was born on 8 December 1903 in Darmopychy, as the third of the seven children of Tekla and Ludwik Czaplicki. Later on, he moved to Warsaw and married Stefania Najdzik. He and his family (his wife and sons: Tadeusz and Jerzy) were then living in the village of Ząbki near Warsaw. Franciszek Czaplicki was a clerk and worked at the  post office. During the Warsaw Uprising, he was sent to the Stutthof concentration camp and shortly afterwards to the Neuengamme concentration camp, where he died on 12 November 1944. He was buried in the Ohlsdorfer cemetery in Hamburg.