Globally about Poland, with billion-strong readership

On the 40th anniversary of “Solidarity”, texts about the Polish spirit and freedom reached over a billion people (1,014,000,000) through the press in thirty-eight countries. Among them was an essay by Professor Andrzej Nowak, published in Russia, or stories on the "Decade of Central Europe", featured in the media of over fifty states. It required no costly ads; all it took was quality texts by top writers. 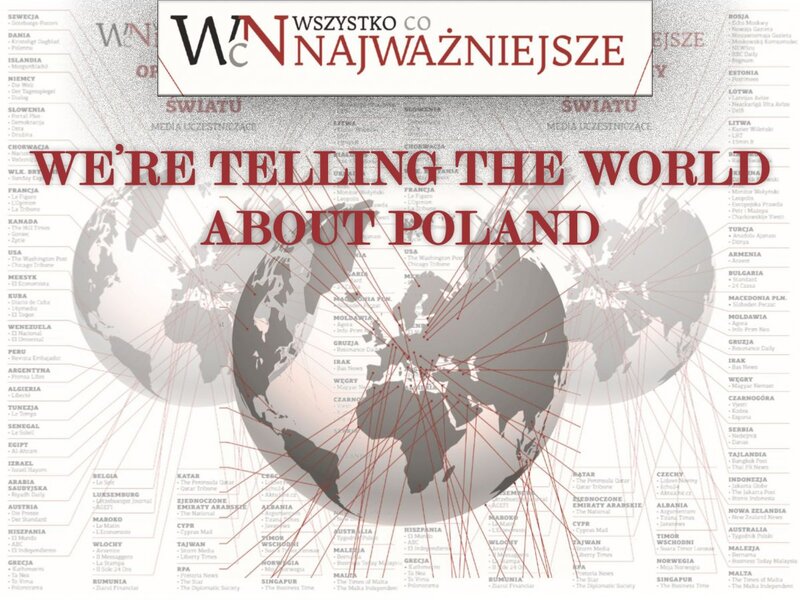 Wojciech Roszkowski, Andrzej Duda, Roger Moorhouse, Mateusz Morawiecki, Allen Paul, Jack Fairweather, Piotr Gliński, Jan Rokita, Andrzej Nowak, Zdzisław Krasnodębski, Marek Kornat, Anthony Beevor, Dermot Turing, Marek Dietl, Jarosław Szarek, Michał Kleiber, Timothy Snyder, Ryszard Bugaj, George Weigel, Chantal Delsol, Rocco Buttiglione, Maciej Zięba are just a few of the authors writing for the "We Are Telling the World about Poland" global initiative. Until recently, such a project simply would not have happened. These days, stories about the Polish love of freedom by the most eminent Polish historians and intellectuals are published as part of an inter-editorial exchange of materials in the environment dominated by the Russian narrative (in "Nezavisimaya Gazeta", "Novaya Gazeta", "Echo Moskvy"), while texts on the history of World War II appear in Germany or Austria. It was made possible by the synergy of institutions and people – historians, journalists, diplomats, experts in narrative marketing and language of communication – working to promote Poland in the world, and successfully turning aspects of Polish history into universal stories by referring to myths and archetypes understood in other regions of the world.

As a result, the micro-narratives from Poland – such as the ones about Witold Pilecki, Polish mathematicians breaking the Enigma code, the Ulma family and other Poles punished with death by the Germans for helping Jews, the Ładoś Group, "Solidarity" and forgotten revolutions in Central and Eastern Europe, influence of the teaching of John Paul II, economic opportunities of the countries of Central Europe, or the most recent episode on the Polish love of freedom and democratic principles appearing on the anniversary of the 3 May Constitution – have been reaching more and more readers.

Well-told stories appeal to the world: on the anniversary of the 1920 Battle of Warsaw, dedicated texts got to 554,9 million people in thirty-six countries, over a billion (1,014,000,000) readers in thirty-eight states read the articles on the anniversary of the Solidarity movement, only slightly smaller numbers were recorded in the subsequent editions of the project (according to the data gathered by PAP Media Intelligence). Recently, essays on the Polish economy, prepared by the Institute of New Media, have appeared in the media of over fifty countries, including the leading economic magazines. Equally successful might be the latest edition of the project, in which on the 230th anniversary of the 3 May Constitution, top Polish authors are writing about the importance of democracy and freedom for Poles.

"We Are Telling the World about Poland” project is run by the New Media Institute in Warsaw and its French branch in Paris, partnered by editorial teams from all over the world. Time zones matter little, cultural differences are bridged, and the project continues under the pandemic restrictions, still requiring no ads or costly promotional space. Any other campaign would burn out huge resources to secure a billion readers, or even half that number. How is the success of "We Are Telling the World about Poland” possible then? The answer is the people – the authors who tell stories about their country with passion and intellectual integrity, the staff who edit them in foreign languages, and the readers who, taking pride of Poland’s history, relate or pass them on to friends and neighbors in Texas, East Timor, Algeria, Venezuela, South Africa, the United Arab Emirates, Indonesia and Malaysia, Armenia and Georgia, in virtually all European countries, all the way to Iceland.

The texts themselves are a big asset: well-written, translated into several languages, and more and more often ordered by editorial offices around the world. Inspirations also come from the Polish communities abroad, missionaries and our compatriots who have achieved success and recognition in other countries. Polish diplomacy is a great help in exporting the goods at the time when foreign travel has been seriously limited. The project continues despite the pandemic – supported by the Ministry of Foreign Affairs, the Institute of National Remembrance, KGHM Polska Miedź S.A., the Warsaw Stock Exchange, the Polish Development Fund, the Industrial Development Agency, Bank Gospodarstwa Krajowego, the Orlen Foundation, and the Polish Press Agency. Its impact has been noticed by other Central European states, which see it as model strategy for building a country’s image.