"Executions by hanging – but also by shooting – were carried out in the corner of the prison wall . . . and bodies were often buried right on the execution site." 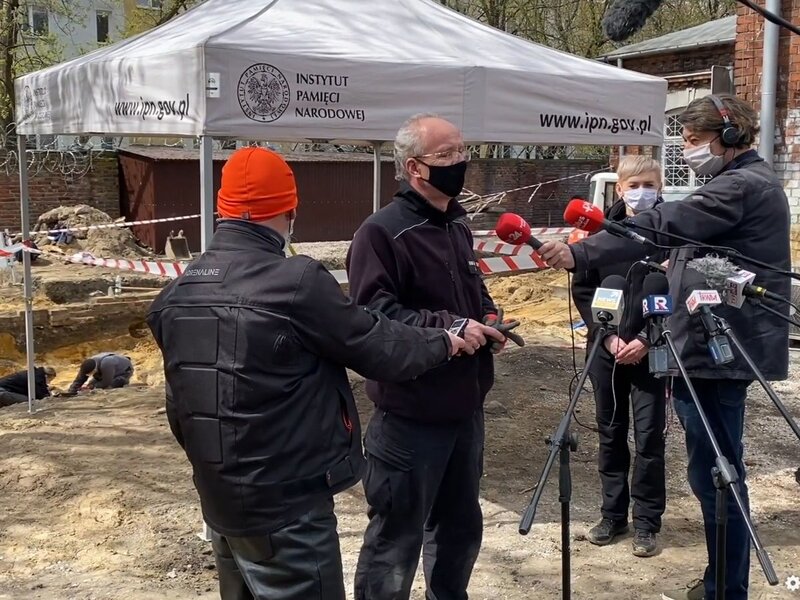 This is what, according to the IPN’s Deputy President and head of the Office of Search and Identification, happened in the formed security services detention center in Warsaw’s Praga District. On 22 April, at a press briefing on "Toledo" grounds, Krzysztof Szwagrzyk summed up to-date work and conclusions the Office experts were able to draw from their grisly findings,

The activities the Institute of National Remembrance carried our here in 2020 resulted in unearthing the remains of 18 people, killed, we think, between 1944 and 1947; what we found led us to believe that we were undoubtedly dealing with the victims of communists, that some of the remains were of persons sentenced and put to death – but apart from that determined that a number of these bodies belonged to people slain in operations in the countryside, who were subsequently brought and buried here.

The Office head also spoke about the future exploration of the prison grounds,

The work we’re doing at the moment will not be complete by the end of this week; in fact, it will take the whole of the next one, and next stages will be necessary – here and on the other side of this building, in the garden, where, as we learned from the testimonies of the 1940s inmates, human remains might have been hidden as well . . . Such accounts make it necessary to continue the exploration of the prison grounds, both within and outside the prison walls.

and about past findings,

Back in 1990s, a search – or, rather, attempts to search these grounds – were undertaken, and they determined that in the course of the construction of the residential buildings behind us human remains were located. Unfortunately, we were unable to find out what happened to them, who decided to remove these bodies and to where.

In the years 1944-1947, 136 executions were carried out in this prison. We don’t know how many other inmates died during their incarceration - though it might be at least a comparable number - or how many were tortured to death in nearby security services stations, such as in Strzelecka Street or NKVD posts. So I can put the total estimate at several hundred bodies. In all, we’ve unearthed fewer than 50 people, but it’s just a fraction of all remains to be found.

“Toledo”, as the place was dubbed, was one of several such facilities in Warsaw, established as soon as the Soviets installed themselves in the Polish capital. Initially run and staffed by the NKVD, it served the purpose of interrogation and elimination of members of the underground organizations loyal to the legal Government, people perceived as an obstacle to communist plans of dominating of the country.

The prison gained notoriety as a torture chamber and execution ground immediately after it started operation: some people murdered during interrogation or afterwards were secretly buried in Lot ”Ł”, commonly referred to as “Łączka” (Meadow), located on the southern edge of the Powązki Military Cemetery, but most bodies were dumped into a ditch on site, and then covered with lime, rubbish, and soil. The "Toledo” prison, established and initially run by the Soviets, was soon taken over by Polish communist Security Service, which used it for the same purpose and in the same manner until 1956.