In November 1918, when Poland regained independence after 123 years of slavery, it had five difficult years ahead of it, struggling to recover the lost borders and to get them internationally recognised. The Polish-Bolshevik war of 1919-1920, which officially ended with the signing of the peace treaty in Riga on March 18th 1921, was of greatest importance and consequence for the fate of the Republic of Poland and Europe. 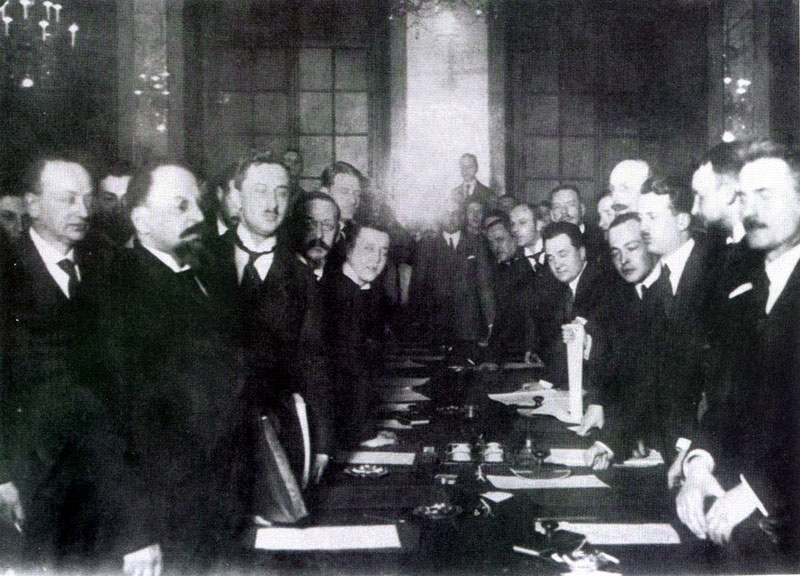 Two concepts regarding the eastern border clashed in Poland at that time. The federation idea, proclaimed by Józef Piłsudski, assumed the creation of a separate Ukrainian state to the east of the Republic of Poland, connected with Poland by a close alliance, and a federation with Lithuanians and Belarusians in the territory of the former Grand Duchy of Lithuania. The idea of incorporation, represented by Roman Dmowski and the National People's Union, provided for the incorporation into Poland of those lands in the East, where Poles constituted the majority of the population, and the assimilation of local residents of non-Polish origin. As a consequence, a nationally uniform state was to be created. According to Dmowski's plan, Poland would include: Eastern Galicia, Lithuania and the Belarusian lands up to the Berezina River.

Among the potential members of an alliance or federation with Poland, Ukrainians were the most involved in the project. In 1919, the leader of the Ukrainian People's Republic, Symon Petliura stated,

The fight against the Bolsheviks is not over yet. It should be noted that the greatest obstacle in this matter so far has been our isolation from our neighbors, and primarily from Poland. This isolation has hurt us all the more because we have common goals in this fight.

On April 21, 1920, the Republic of Poland and the Ukrainian People's Republic signed a political agreement defining the common border of both countries and the principles of future cooperation. Three days later, a military convention was concluded.

It recognised Polish and Ukrainian troops as allied and fighting "under the supreme leadership of the Polish Army Command".

The treaty also guaranteed that in the areas of right-bank Ukraine liberated from the Bolshevik rule, an administration would be created under the government of the Ukrainian People’s Republic. The retreat from Kiev shattered these plans.

For life or death against the Bolsheviks

The Polish-Bolshevik war was a clash of two different civilisations - the Western world, built on Christian foundations, with bloody totalitarianism, which was characteristic for its imposed atheism. Both sides of the conflict were very young.