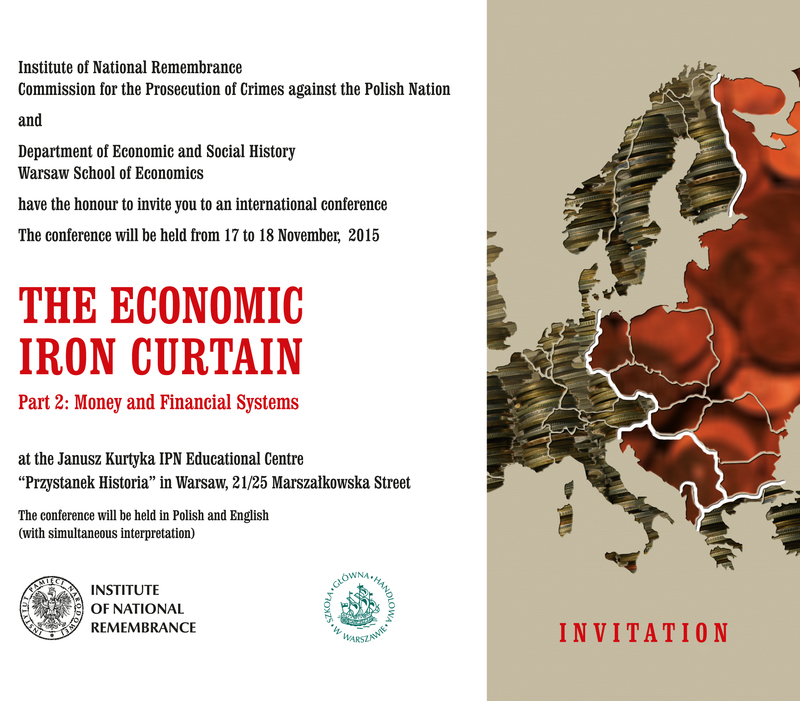 The Public Education Office of the Institute of National Remembrance and the Department of Economic and Social History of the Warsaw School of Economics would like to invite you to participate in the international conference „The Economic Iron Curtain. Part 2: Money and Financial Systems”, which will be held in Warsaw, 17–18 November 2015.

2015 marks the 70th anniversary of the creation of the National Bank of Poland, which served as the central bank of communist Poland for over 40 years. It then underwent changes with the rest of Poland after 1989 and now oversees a modern market economy. The Bank's story forms part of the wider problem of monetary and financial history of the Cold War. A multifaceted discipline, it is underrepresented in existing narratives of the period, and is mostly the object of research of the fairly exclusive group of financial historians. At the same time, finances of the Western and Eastern bloc are usually considered on their own, without a systematic narrative to encompass all aspects of Cold War finances.

The aim of this conference is to contribute to filling both of these gaps. We would like to bring together historians of both Eastern and Western post-WW2 finances and together consider financial relations and the functioning of monetary, banking and fiscal systems on both sides of the Iron Curtain, thus adding a financial context to the existing narratives of the Cold War. We are also looking forward to papers concerning the specificity of finance in the conditions of central planning, the transitions to and from central planning, the histories of chosen components of the financial systems and the social, economic and political impact of financial architecture.

The conference forms the second part of a series of four annual meetings on the profound impact of the systemic change in Eastern Bloc economies. The last two conferences will focus on industry and central planning. We envisage the entire project to provide a new context for the functioning of centrally planned economies.