"I have never been a Nazi, I apologize once again for the irresponsible gesture from several years ago and I consider it a mistake," says Tomasz Greniuch, Ph.D.

The first public action of Tomasz Greniuch, Ph.D. after taking the post of the Head of the IPN’s Opole sub-branch was paying tribute to the victims of the Kristallnacht (Night of Broken Glass) in the place of the former Opole Synagogue. "My family was affected by both totalitarianisms: German Nazism and Soviet communism. I have never been a Nazi, I apologize once again for the irresponsible gesture from several years ago and I consider it a mistake.

The symbols and gestures that I made were youthful bravado, turning a deaf ear to common sense and consequences. However, they were never aimed at glorifying totalitarianisms!,” says Tomasz Greniuch, Ph.D.

Tomasz Greniuch is a great-grandson of Józef Piłsudski’s soldier, defender of Lwów, and a man whose family was affected by German and Soviet totalitarian regimes. 19-year-old Marian Greniuch - uncle of Tomasz Greniuch - was a member of the Gray Ranks, arrested by the Gestapo and after a brutal interrogation imprisoned in KL Auschwitz on 10 January 1941. As a political prisoner, he was executed by shooting on 11 November 1941. Genowefa Greniuch aka “Pik” or “Kropka”,  during German occupation served as the head of the National Women's Organization cell in Bochnia. After the war, under Soviet occupation, she was a courier for the anti-communist underground. Adam Greniuch, a high school student in 1946, would put up posters "Long Live 3 May!" in Cracow. Wanted by the communist Security Servce, he was hiding in the western territories of Poland until 1947. Greniuch's great-grandmother, deported from the Eastern Borderlands of the Second Polish Republic by the Soviet "liberators", lived in the Opole region. Her daughter, Krystyna Greniuch, was committed to spreading knowledge about the lost lands until the end of her life. Greniuch's involvement in the National Radical Camp (ONR) had resulted from uncompromising attitudes towards Nazism and communism of the mentors of the movement, such as lawyer Henryk Rossman (he died after being in an isolation camp in Bereza Kartuska), Tadeusz Gluziński, Ph.D. (died during the illegal crossing of the border during German occupation) or Jan Mosdorf, Ph.D. (died in KL Auschwitz).

In 2013, Tomasz Greniuch chose the path of a historian, researcher and truth seeker. His consistency and persistence in pursuing his goal, regardless of adversities (and there were many of them), led him to the Institute of National Remembrance. Three years of professional work at the Institute of National Remembrance has been a strenuous effort appreciated by his superiors. 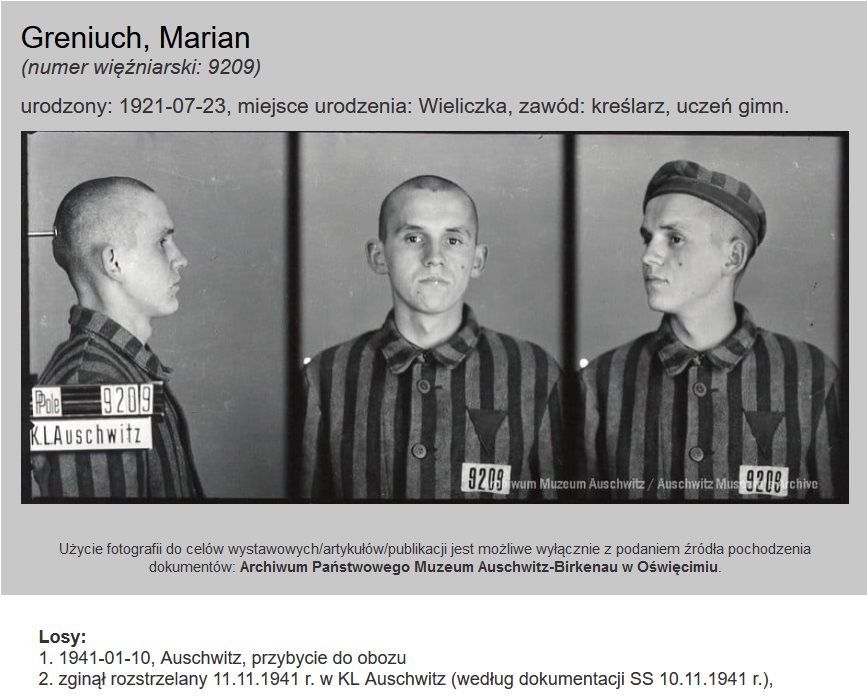