Involvement of state authorities, many public institutions and the media, combined with a widespread social action, convinced Facebook to unblock the English-language profile of the Institute of National Remembrance after four days. The IPN is grateful to all people, institutions and media who stood up for free speech. We hope that this support and reconsideration by Facebook owners and managers will prevent the social networking service from violating freedom of speech standards in the future.

On 6 February, FB banned the English-language account of the Institute of National Remembrance. The reason was a post from seven months ago discussing German plans to Germanize Polish children, a text that referred to authentic documents. Despite the immediate appeal, the account remained disabled until the afternoon of 9 February. Here is the post that was questioned by Facebook administrators:

Dated 15 May 1940, "Einige Gedanken über die Behandlung der Fremdenvölker im Osten ("A Few Thoughts about the Treatment of Racial Aliens in the East") by Heinrich Himmler is a blood-chilling document – especially where it comes to children.

It’s basically a kidnapper’s manual, inspired by the theories of Walther Darré, the Reich's Minister of Food and Agriculture, whose "Blut und Boden" ["Blood and Soil"] racial ideology laid foundations for the denationalization program.

In the years 1940-1945, the Third Reich removed hundreds of thousands of children from the lands it had conquered, treating them like product, and applying rigorous quality control procedures.

The Germans were looking for germanization material, and the youth deemed to qualify for it due to their "good blood" were taken from their families, and directed to special camps, where they underwent selection.

Those of them who were declared fit for the program went through initial germanization there before being sent to German families. Non-conforming "products" disappeared in concentration camps, or were re-used for "medical" experiments.

In all, out of 200,000 Polish children, only 30,000 were recovered after the war. The rest vanished – their bodies erased from the face of the earth, or identity removed from their own and other people’s memory.

The author of the kidnapper’s manual, Heinrich Himmler, worried that the uprooted kids would be ostracized by the German society, and recommended subjecting them to the procedure in tender age and secrecy, so that they could blend in and disappear.

He neeedn’t have worried: disappear they did.

The situation resembles the one from mid-January, when Facebook blocked foreign promotion of the IPN’s film about the German camp in Łódź and 3,000 children imprisoned there. 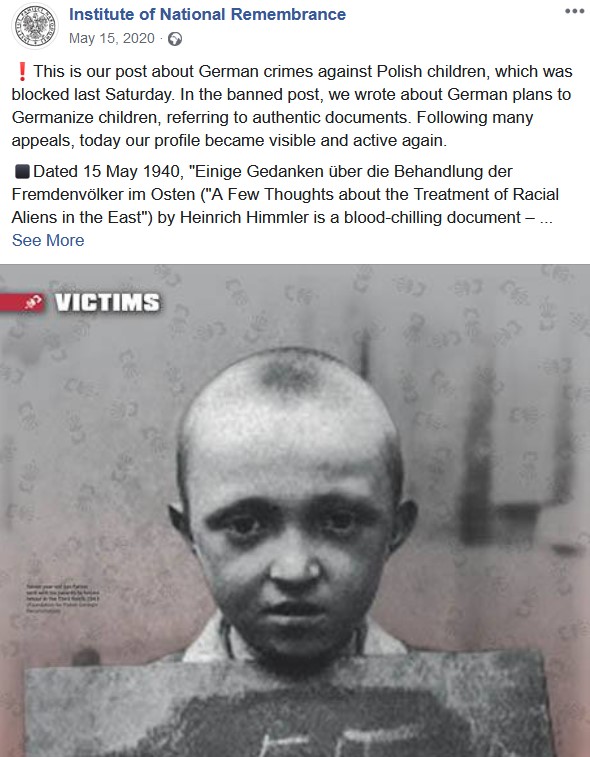 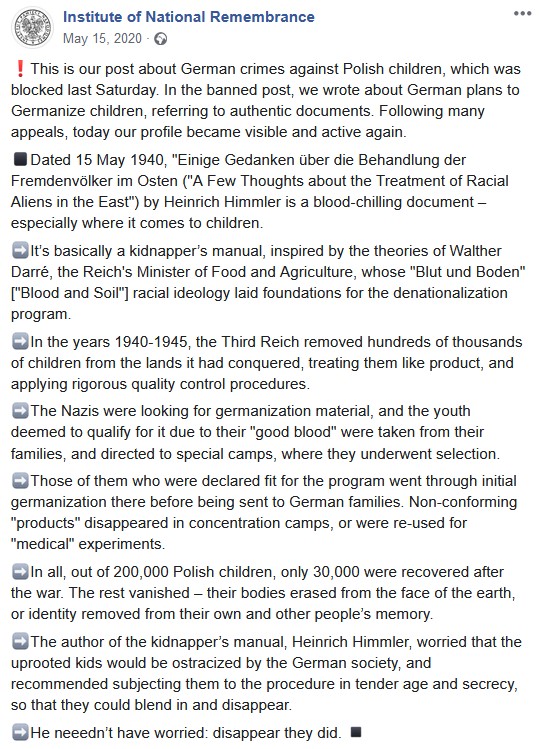