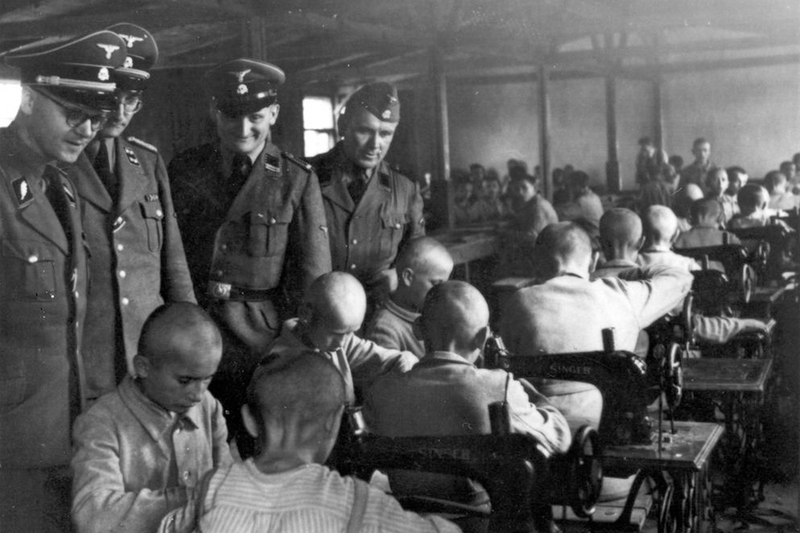 “At first, we didn’t realise what kind of camp it was and what conditions would prevail, because we hadn’t known such conditions. The longer we stayed there, the tougher the discipline became, and the clearer it became that everything was aimed at harrowing us, at tormenting us”.

The appearance of the German concentration camp has been reconstructed on the basis of procedural documents, aerial photographs and witness testimonies. Its lay-out, the shape of the buildings and barracks have been replicated, while prisoners’ testimonies were added and related to the respective places. Thus, a visualisation was created which will help us better understand the nature of this centre, bring its history closer to people, and popularise issues involving the martyrdom of Polish children during World War II.

The concept of erecting a camp for Polish children appeared as early as the summer of 1941 and was initiated by the Head of the National Youth Office (in German: Landesjugendamt) in Katowice, Alvin Brockmann. Oswald Pohl, the chief inspector of German concentration camps, became interested in the project. On 28 November 1941, he obtained acceptance from his supervisor – Heinrich Himmler. Use was also made of a positive opinion issued by the lawyer Hans Muthesius, PhD, who indicated “the need to isolate minor-age Polish citizens and to educate them through work so that they will not demoralise German children”. The centre was modelled on a camp for German juveniles, functioning from 1941 in Mohringen/Solling in Lower Saxony, in which also youth from Czechoslovakia and Poland were imprisoned.

In June 1942, the Germans excluded a parcel of five hectares from the Litzmannstadt Ghetto and designated it for construction of a labour camp for Polish children. The exclusion zone in the ghetto was delineated within the block of the current streets: Górnicza (Robert Straße), Emilii Plater (Max Straße), Bracka (Ewald Straße) and Przemysłowa (Gewerbe Straße). The first prisoners in the Łódź camp were registered on 11 December 1942, although it had formally begun operations ten days earlier. Its official name was the Preventive Camp of the Security Police for Polish Youth in Łódź (in German: Polenjugendverwahrlager der Sicherheitspolizei in Litzmannstadt). The zone for boys constituted ca. 75 per cent of the camp’s area, while the zone for girls and the smallest children of both sexes occupied the rest of the space and was not created until early spring, 1943. For the needs of the camp, around a dozen existing brick-built and wooden buildings were used. In the spring of 1943, the Germans commissioned a company that had executed similar investments in the German concentration camp at Majdanek to construct several prison barracks. A few latrines and outbuildings, as well as greenhouses, garages, a post office and different types of warehouses were erected, although existing buildings were often adapted to perform those functions.

Along three sides, a three-metre high fence was erected from closely fitted wooden planks and topped with barbed wire. On the side of the Jewish cemetery that abutted the camp, a brick wall, elevated to the level of the wooden fence, constituted an obstacle. The main gate was situated at the end of Przemysłowa Street, which before the War only went as far as Bracka Street but did not intersect with it. Under the camp conditions, Przemysłowa Street was extended and changed into socalled Lager Straße, i.e. the main camp alley, paved by the children with rubble and slag. This is where assemblies took place and where prisoners were usually punished. The alley ran in the direction of Górnicza Street, where there was a smaller gate for Jewish workers, food-supply carts and wagons taking ill children away to the hospital or their bodies to the Catholic cemetery of St. Adalbert at 81 Kurczaki Street. The third outer gate was situated on Bracka Street and set along the axis of today’s Tadeusza Mostowskiego Street (Roderich Straße). In its vicinity a guardhouse was set up and here, starting from 1944, children were brought for visits with their parents. Inside the camp there was yet another gate, through which one could get from the main camp to the subcamp for girls.

A dozen or so pre-war buildings were used to fulfil the needs of the concentration camp. Previously, the inhabitants of the Ghetto were forced to use them for two years. For the twenty-five months of the camp’s existence, the commander’s office, located in the pre-war building at 34 Przemysłowa Street, was the most important facility in the camp. It was the residence of the subsequent heads of the camp: Hans Fuge, Arno Wrug and Ehrlich Enders, as well as Karl Ehrlich, the chief of the German criminal police in Łódź, who periodically controlled their activities.

Many of the children imprisoned in the camp were classified by the Germans as the offspring of “dangerous bandits”, which meant that their parents or guardians were members of the Resistance. The occupant also employed the unjustified term of “anti-social element”, equivalent to the German Asoziale. It was used in the camp to denote, among others, criminal offenders as well as loafers, street pedlars, hooligans, thieves, and even fare dodgers and people who did not comply with the curfew or who avoided working. Also children with slight mental or physical impairments ended up in the camp. Among the inmates were also the progeny of people who did not assume German citizenship or were Jehovah’s Witnesses. Sometimes the mere threat of sending one’s children to the camp induced their parents to sign a German nationality list, which withheld the deportation procedure. In Łódź there were also imprisoned Polish minors from the German education centre in Grodków (German: Grottkau) in the Opole region. These boys knew the German language well and were well-disciplined; therefore, they often performed the function of block and room leaders. Altogether, children from Silesia constituted ca. 38 per cent of the inmates and were brought in primarily from Mysłowice, Kietrz and Pogrzebień. Minors from the Kuyavia and Greater Poland regions passed through the detention centresin Potulice, Kiekrz and Poznań. The next large group after them constituted children from Łódź. In the camp there were also individuals from Gdańsk Pomerania and the General Governorate.

The Germans planned for the camp to house simultaneously two thousand prisoners, yet the greatest numbers were noted before the summer of 1944, when ca. one thousand two hundred inmates were registered. However, over a hundred girls, who in the spring of 1943 were directed to the agricultural branch of the camp in Dzierżązna near Zgierz, should be deducted from this number. In this manner German authorities found an opportunity to make the camp independent form external food supplies. Starting from mid-1944, more and more children were released from the camp. Some of them regained their freedom by their parents’ signing the Volksliste; others were directed to work in the factories of Łódź or in German companies in the interior of the Third Reich.

According to assumptions, the camp was supposed to accommodate prisoners between the ages of twelve and sixteen. In practice, however, it turned out that also children that were only under ten years old and still in need of constant care were brought in the transports. The youngest were taken care of by the female inmates, who supervised a building that was called “the isolation ward” or “the house for little children”. First and foremost, the camp acted as “a giant workshop”; therefore, the paramount duty of the inmates was to support the German economy and German army. Boys were most often allocated to the so-called “needle room”, where they straightened weaving needles. In the “bast-shoe room”, they wove straw plaits, which they later sewed together into irregularly-shaped Winter boots for the German soldiers fighting in the Soviet Union. Additionally, they produced mats that were used as pads placed under the wheels of army vehicles, when these got stuck in mud or were buried in snow. Boys also stitched damaged backpacks and haversacks as well as repaired military footwear. In the sewing room, elements of uniforms and camp workwear were sewed. These tasks were performed by boys and girls alike. Girls additionally darned shot holes or tears in uniforms; some also made artificial flowers out of paper, knitted hats, gloves and scarves, as well as crocheted and embroidered tablecloths. From the spring of 1943 the strongest children were sent to the agricultural estate of ca. 160 hectares in Dzierżązna, where they worked the field, groomed farm animals and harvested fish in the pond.

Working for more than a dozen hours per day was exhausting for the children. They performed their tasks under stress, in very bad conditions; they were often beaten, starved and humiliated by 10 staff supervising their work. They could not find respite even in their sleep, since the barrack rooms were chilly, the camp beds overcrowded and the lack of proper sanitary measures resulted in skin conditions as well as plagues of lice and fleas. Additionally, in early 1944, there broke out an epidemic of typhoid in the camp and infected children were treated in the isolation hospital at 74 Dworska Street (currently, Organizacji Wolność i Niezawisłość Street) on the premises of the Ghetto. Death also occurred as a result of hypothermia and starvation, which was no rare phenomenon, considering the practice of punishing prisoners by putting them in seclusion rooms. Flogging was also used as a constant element of camp discipline. Children who worked poorly were branded with a red cross painted with oil paint on the back of their overcoat and directed to the so-called “penal company”, where they were given reduced food rations. This company dealt primarily with demolishing houses, tarring roofs, cleaning latrines and paving camp alleys. The smallest children were sent from the Łódź camp to the German Lebensborn Germanisation centres in Ludwików, Puszczykowo and to the so-called Gaukinderheim in Kalisz. Sometimes older children were transported to other labour centres, such as the camp in Potulice, or when they turned sixteen – to the German concentration camps of Gross-Rosen, Ravensbrück and Auschwitz, among others.

The last functioning day of the camp on Przemysłowa Street was 18 January 1945. No assembly was called that day and none of the guards ran the children out of the barracks. The Germans hastily 11 got on a truck and left the outpost. Once they had decamped, the main gate on Przemysłowa Street was left wide open. The Red Army was fast approaching Łódź; its troops marched into the city the next day. In the abandoned camp only a few hundred children, frozen and weakened with hunger and disease, were found. Two hundred of them, as orphans, stayed in Łódź for the years to come, initially occupying the building of the City Emergency Shelter for Children at 36 Kopernika Street.

The camp in Przemysłowa Street - learn about our fear!

Read about Facebook unblocking the documentary about the camp:

Facebook has unblocked the international promotion of the film about the camp in Przemysłowa Street in the city of Łódź!