The reconstruction of the Polish State after 123 years of enslavement was a phenomenon. Efforts of many Poles, their commitment and sacrifice during the First World War, combined with vigorous diplomatic actions, resulted in the creation of the Second Republic of Poland. The whole process was led by the “Fathers of Independence”. 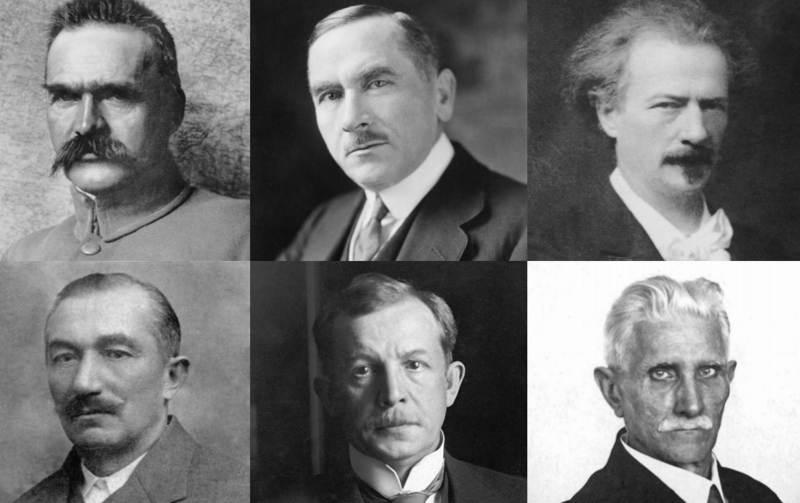 We present six important figures: Józef Piłsudski, Roman Dmowski, Ignacy Jan Paderewski, Wincenty Witos, Wojciech Korfanty, and Ignacy Daszyński, They represented different walks of life, such as artists, diplomats, soldiers, politicians, and social activists, held different political opinions, came from different social backgrounds, were of different religious denominations, and had been born in different regions of partitioned Poland - yet, they were able to unite in a common, imperative effort: INDEPENDENCE. It did not mean that they agreed on everything, were fully united or eagerly cooperated. Each stood by his beliefs and opinions, but they all took advantage of the international situation and together led Poland to FREEDOM.

Józef Piłsudski is remembered as the leader of the independence movement and defender of the young state. He was the commander of the Combat Organisation of the Polish Socialist Party (PPS) and initiator of the establishment of the underground Union of Active Struggle and Riflemen’s Association, which later, in 1914, became the basis for the formation of the Polish Legions. At the same time, he created the underground Polish Military Organisation (POW). In 1917, he refused to swear a loyalty oath and brotherhood-in-arms to the German and Austrian forces, which resulted in his arrest by the Germans in July 1917 and imprisonment in Magdeburg. On 10 November 1918, Piłsudski returned to Warsaw, where in the following days (11–14 November) was accepted as the head of state and commander-in-chief of the Polish Army. On 16 November, he cabled the leaders of the Entente states, announcing “the existence of the independent Polish State”. On 20 February 1919, he was appointed the Chief of State until the elections. He commanded the armed forces in the fights for the eastern parts of Lesser Poland against the Ukrainians, and in the Polish-Soviet War of 1919–1920. At that time, he presided over the Council of National Defence, and was one of the principal contributors to the victories at Warsaw and on the Niemen River.

Roman Dmowski was the chief contributor to the national democratic movement (the National Democracy, ND), and a political writer. He was an opponent of revolutionary means of regaining independence, and advocated the notion of Germany as a greater threat to Poland than Russia. He created the Polish National Committee, recognized as the official diplomatic representation of the Polish people. He successfully sought to create the Polish Army in France, and saw it formed in 1917. He was a Polish delegate to the Paris Peace Conference, and in June 1919, he signed the Treaty of Versailles. He fought for Polish western frontier, didn’t want the eastern one moved too far east, and thought it best for the young state to assimilate all minorities into the nation. During the Polish-Soviet War, he was a member of the Council of National Defence.

Ignacy Jan Paderewski gained prominence as an excellent pianist, but his country remembers him as much more than that. During the First World War, he was an active member of the General Relief Committee for the Victims of the War in Poland. In 1915, he gave concerts in the United States, where he promoted the Polish interests and urged President Woodrow Wilson to support the cause of Polish independence: the pianist is credited with the fact that Wilson demanded Poland's independence in the thirteenth of his Fourteen Points. From August 1917, he was a representative of the Polish National Committee in the United States. In December 1918, despite protests of the German authorities, he came to Poznań, which sparked the outbreak of the Greater Poland Uprising. In January 1919, he was appointed the Prime Minister and Minister of Foreign Affairs of the Polish Republic. With Roman Dmowski, he represented Poland at the Paris Peace Conference and was a signatory of the Versailles Treaty.

Wincenty Witos was an peasant movement activist, from 1895 a member of the Peasants’ Party in Galicia. Initially, he supported the idea of the Polish Legions, perceiving Austro-Hungary as the guarantor of the re-emergence of the Polish state. From 1915 on, he began to support the idea promoted by the National Democracy, of the rapprochement with the Western powers. In the autumn of 1918, he was appointed the head of the Polish Liquidation Committee in Cracow, a temporary government with the mission of taking power in the western part of the sector controlled by the Austro-Hungarian empire. During the Polish-Soviet War, he was the Prime Minister and member of the Council of National Defence.

Wojciech Korfanty, a politician from Silesia, was one of the leaders of the Christian Democracy in Poland. Initially, he cooperated with Roman Dmowski, and strongly objected to the German denationalization policy against the Upper Silesia Poles – which led to his imprisonment. He became famous for his Reichstag speech on 25 October 1918, in which he demanded that all the territories annexed by Prussia, as well as Upper Silesia, be included in the future Polish state. He fought in the Greater Poland Uprising, and in 1920, was appointed the Polish plebiscite commissioner in Silesia. He was one of the main leaders of the second Silesian Uprising, and in the following year became the chief leader of the third one.

Ignacy Daszyński was a socialist, for many years leader of the Polish Social Democratic Party of Galicia, active in the territory of Poland annexed by the Austro-Hungarian empire. After the outbreak of the First World War, he supported the formation of the Polish Legions and Polish Military Organization. On 7 November 1918, he was appointed the head of the Provisional People's Government of the Republic of Poland in Lublin. The reforms it proposed were quite radical, so Józef Piłsudski wanted him to form a new coalition cabinet; however, Daszyński was unacceptable to the politicians from the right and had to resign, his place taken by Jędrzej Moraczewski. During the Polish-Soviet War, he served as a Deputy PM in the State Defence Government of Wincenty Witos.

The exhibition entitled "Fathers of Independence" presents six leaders of the fight for Poland in 1918: Józef Piłsudski, Roman Dmowski, Ignacy Jan Paderewski, Wincenty Witos, Wojciech Korfanty and Ignacy Daszyński. It consists of over two-meter-tall silhouettes of the politicians, with their biographical entries in Polish and English, and contains a timeline of events of the Polish struggle for independence. 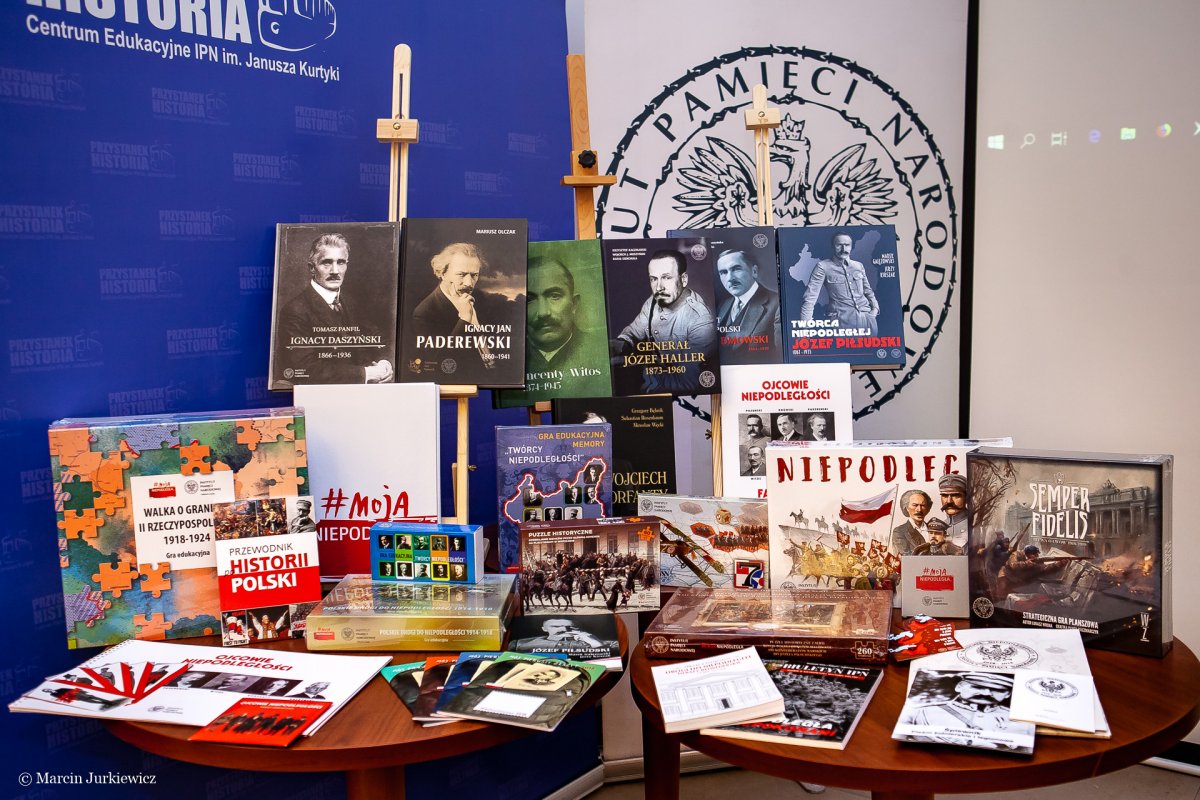