Celebration of 66 Anniversary of the Liberation of German Concentration Camp KL-Dachau - May 1, 2011 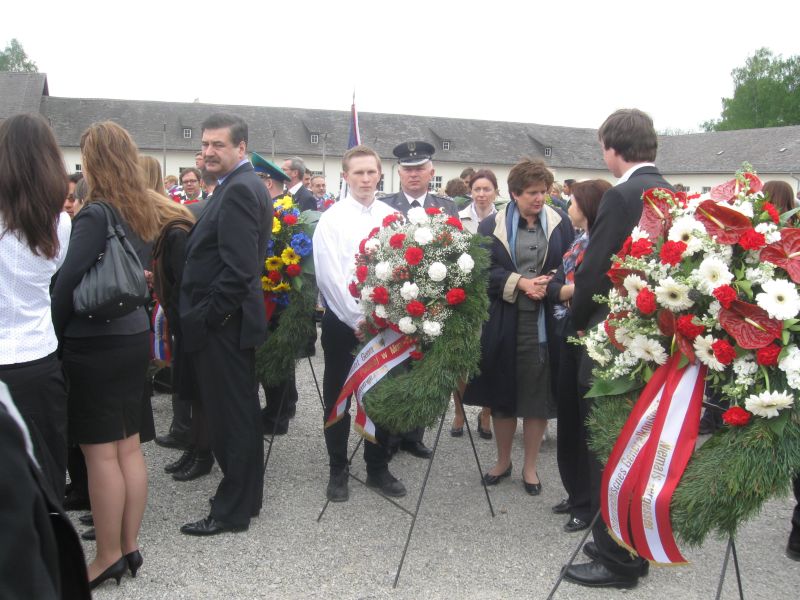 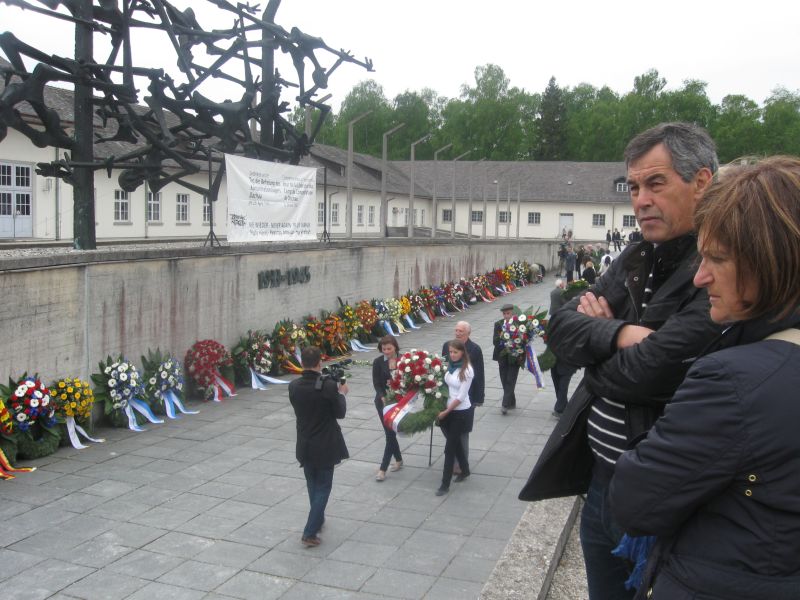 
(Words carved on the monument at KL Dachau crematorium)

On Sunday 1 May 2011 at the former Dachau concentration camp area the International Committee of Dachau (CID) and the Bavarian Memorials Foundation organized the ceremony of 66th anniversary of the camp liberation.
KZ-Dachau, established on March 22, 1933, near the town of Dachau in Bavaria in the years 1939-1945 was the main center for extermination of hundreds of thousands of people from all over Europe. Most of the victims were Poles and Polish priests. Today the Dachau concentration camp is not only a place of remembrance and meditation on the fate of the victims, but also an important base of historical and ethical education. The task of this place is never to forget. William W. Quinn, U.S. Army Officer, wrote in his report to from the liberation of the camp: "Dachau 1933-1945 will always remain one of the most notorious symbols in the history of barbarism. Our troops there faced so terrible views as to be beyond belief, cruelties so enormous as to be incomprehensible for a normal mind. Dachau and death are synonymous. "

Celebrations began in the Carmelite Convent Church of Holy Blood with ecumenical holy service celebrated by Catholic , Protestant and Orthodox Church priests. After the celebrations in Caramel and the Jewish Memorial, a meeting was held next to the crematorium, led by President of the community of Dachau concentration camp, 91-year-old former prisoner, Max Mannheimer, who recalled the sacrifice of more than 40,000 lives cruelly murdered in the camp. The ceremony’s symbolic gesture was giving white roses by the former prisoners to youth as a sign of continuity of memory about the events of war during the next generations as well as a symbol of civil courage, which, as the vice president of CID Max Mannheimer stressed, was missing today. The focal point of the celebrations was to lay wreaths on the parade ground at the Wall of Remembrance by the delegations of Bavarian government, the city of Dachau, organizations of former prisoners and the consular corps of German-occupied countries of Europe. Poland was represented by the Consulate General in Munich, Ms. Elżbieta Sobotka, and the Vice Consul Ms. Aneta Berdys. Institute of National Remembrance was represented by Anna Jagodzinska. Mr. Eugene Szopski, the only Polish prisoner present at the ceremony, Home Army soldier and a participant of the Warsaw Uprising, independently laid a wreath, as a member of the International Committee of Dachau.

Before the wreath laying, Mr. Thomas Kreuzer, representative of the Bavarian State Government – the Secretary of State in the Bavarian Ministry of Education took the floor and stressed that today's citizens of Germany do not bear the guilt for Nazi crimes, but they are responsible for ensuring that they are never repeated. The Liberation Day was fortunate for those who survived, but a day of mourning and sadness because of the 41,500 victims of KZ-Dachau. The current President of the International Committee of Dachau, Peter Dietz de Loos expressed his lack of understanding for the German judiciary, which continues to recognize the decree of Hitler in 1943, by which German citizenship was granted to Dutch volunteers who had joined the SS. This has prevented the release of life imprisonment sentence, pronounced in the Netherlands, of Klaas Carel Faber. The ceremony was attended by former president of Croatia (in 2000-2010), Stjepan Mesic.

It should be recalled that until 1965 the German settlers from Silesia, Pomerania, the Czech Republic lived in the area of the former concentration camp. After 1965 at the initiative and according to plans by Dachau prisoners who gathered in the International Committee of Dachau (CID) and with support of the Bavarian Government the Dachau Memorial Museum was set up. In the years 1996-2003 new exhibition was prepared. Since 2005 the place exists as Concentration Camp - Dachau Memorial Site. In 1984, the camp was added to the list of objects protected by UNESCO. Each year the Museum is visited by around one million people. Barbara Distel, Director of the Museum, on May 2, 2003, at the opening of the exhibition Dachau Memorial Museum, said: "During World War II the prisoners formed « European community ». In addition to the community of fear and despair, suffering and death there were also moments in which the prisoners, despite the cultural and linguistic barriers, helped each other. The rest of the soup, comforting word [...], raised new vital forces and strengthen the hope for survival. "

Until 1970 the camp was not any indication that the Poles died here as well . On the day of liberation of the camp among the 33 000 of liberated prisoners there were 10 000 Polish. Therefore, in 1972 the Polish priests put board on the wall of the Chapel of Christ's Mortal Anxiety, located at the former camp, with the following inscription in Polish language: "Here in Dachau, every third who was tortured was a Pole. Every second of the Polish priests imprisoned there sacrificed his life. Polish priests – the fellow prisoners - worship the sacred memory of them. "

The theme of the exhibition is "The Way of Prisoner", depicting the history of the Dachau concentration camp. Those who were sent to Dachau crossed the gate with the inscription "Arbeit macht frei" (Work makes you free) to find himself in the camp, from which the only way out was the way through the crematorium chimney.

Following the traces of the crime I got to the church of St Martins Ostfriedhof Platz in the heart of Munich. Inscription engraved on a small stone obelisk recalls that it was where the murdered in Dachau brought were cremated. Then the ashes of the prisoners were transported and buried in the old cemetery in Munich Perlacher Forst. Today the ashes are buried at the cemetery in urns under 44 nameless plates in the Grove of Remembrance. Among them, the ashes of murdered Poles.

After the liberation hundreds of prisoners died of starvation and epidemic of typhus. They were buried in the cemetery of Leitenberg, near Dachau. 5,000 murdered in Dachau are buried at the Waldfriedhof cemetery.

The Dachau "March of Death II" with its motto "Against Oblivion - For Democracy" sets off every year from the symbolic monument, depicting walking prisoners. The inscription on the monument reads: "Here, in the last days of the war in April 1945 led the martyr path of prisoners of the Dachau concentration camp onward into unknown."

Places of worship, raised at the area of the former concentration camp, i.e. Catholic Chapel of Christ's Mortal Fear (1960), Jewish Memorial (1967), Evangelical Church of Reconciliation (1967), Carmelite Monastery of the Precious Blood of Christ (1964), Memory Chapel of the Russian Orthodox Church (1995) attract the attention of visitors.

On May 4, 2011 the representatives of the Polish Consulate (Consul General Elżbieta Sobótka, Vice Consul Aneta Berdysz), representatives of the city (Mayor Dr. M. Rapp, Director City Archives Dr. Hruschka), and Polish officers from the NATO School in Oberammergau, celebrated the 66th anniversary of the liberation of POW by the U.S. Army and the memory of the death by laying the wreaths at the grave of Polish officers at the cemetery of Murnau who died during the war and after the liberation of officers Oflag VII A in Murnau. Soon, the place of the former the Oflag - now army barracks, will be commemorated with plaque sponsored by the Council for the Protection of Struggle and Martyrdom Sites.

Celebrations in Dachau were documented by Rafał Wieczyński (Director of the movie "Popieluszko"). Rafał and Julia Wieczyński are currently making a movie about the life and missionary activity in Africa of Jesuit Cardinal. Adam Kozłowiecki, former prisoner of Dachau.
The talks at the Polish Consulate in Munich with Consul Ms. Elżbieta Sobótka concerned the cooperation with the IPN. It should be noted that Consul Sobótka is very involved in the commemoration of the martyrdom of Poles in Germany. Thus, cooperation with IPN is essential. Thanks to her initiative, visitors can already use Polish-language guide when visiting Dachau Museum this year.

Presentation of "Book of Remembrance of the Victims of Dachau" took place a day earlier, on Friday 29 April 2011. The book contains 32,099 names of identified individuals who were murdered or died in the Dachau concentration camp and its sub-camps. The complete register lacks 8330 missing unidentified persons. The book is the first work dealing with the entire list of the dead prisoners. It was created with the involvement of the Directorate of the Museum of the former Dachau KL and archive staff of the camp. Polish citizens are the largest ethnic group among the victims of Dachau.

I wish to conclude my "meeting" with Dachau concentration camp with the words of 99-year-old former prisoner, Fr. Leon Stepniak: "Today should not be a reason to accuse anyone , or to take revenge, or to perform fragmentation of past sins, but it should be a time of reconciliation."