“The Image of Treblinka in the Eyes of Samuel Willenberg” exhibition

The exhibition of Samuel Willenberg’s 15 bronze sculptures depicting life in the German death camp in Treblinka, can be seen at the IPN’s "Przystanek Historia" Educational Center in Cracow ( 8 Dunajewskiego Street) until 13 September 2020. 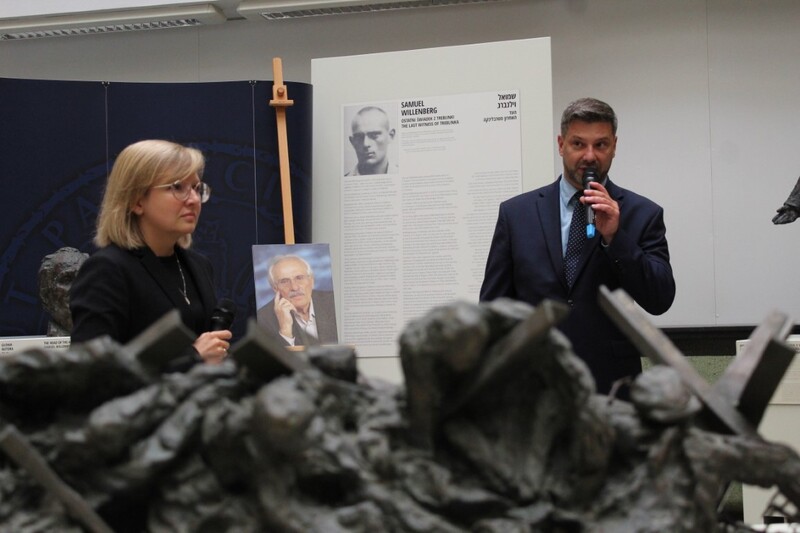 During the opening of the exhibition in Cracow, Roksana Szczypta-Szczęch Ph.D. talked about Samuel Willenberg’s works.

“Each of the sculptures portrays a person or scene which, until the end of the Author’s life, remained a vivid, painful memory. Samuel Willenberg was one of the 199 prisoners of the Treblinka death camp who managed to escape on 2 August 1943(…) The sculptures refer directly to the conditions at the camp and are an image of those memories, which became engraved in the Author's memory. On the one hand, they share a common theme, and on the other, each can be viewed as an individual story.

The IPN’s Cracow branch would like to invite young people to take part in history lessons and workshops based on the sculptures constituting this unique exhibition.

The Institute’s project aims to commemorate Holocaust victims. The opening of the exhibition of Samuel Willenberg’s  fifteen sculptures depicting everyday life in what can be described as hell on earth, has been prepared by the Institute as part of the celebrations of the International Holocaust Remembrance Day. The sculptures will remain under the care of the Institute of National Remembrance for a year. So far, they have been displayed in Warsaw, Lublin and Gdańsk. The exhibition will further visit Częstochowa and Kielce.The sculptures will also be the subject of educational workshops for both teachers and students.

Samuel Willenberg fulfilled the will of other prisoners by telling the world what happened in Treblinka at a time when evil seemed to prevail. (...) He did not give up. Together with other prisoners, he took up arms to fight for a dignified death. (...) He survived and left his testimony. (...) When he was sculpting, he cried. An unusual alloy of bronze, suffering and tears was created - said Jarosław Szarek Ph.D., the President of the Institute of National Remembrance, during the opening of the exhibition.

Despite the traumatic war experiences in German-occupied Poland, until the end of his life in 2016 Samuel Willenberg had the courage to return to his native country. Since leaving for Israel in 1950, he and his wife Krystyna have, on numerous occasions, traveled to Poland – either alone or as guides of Israeli youth. They became the spokespeople for good Polish-Jewish relations, openly talking about both the tragic and the beautiful events connecting these two groups of Polish citizens who had experienced the atrocities of German occupation. The Willenbergs are credible witnesses to the tragic fate of Polish citizens, especially of Jewish descent, during World War II.