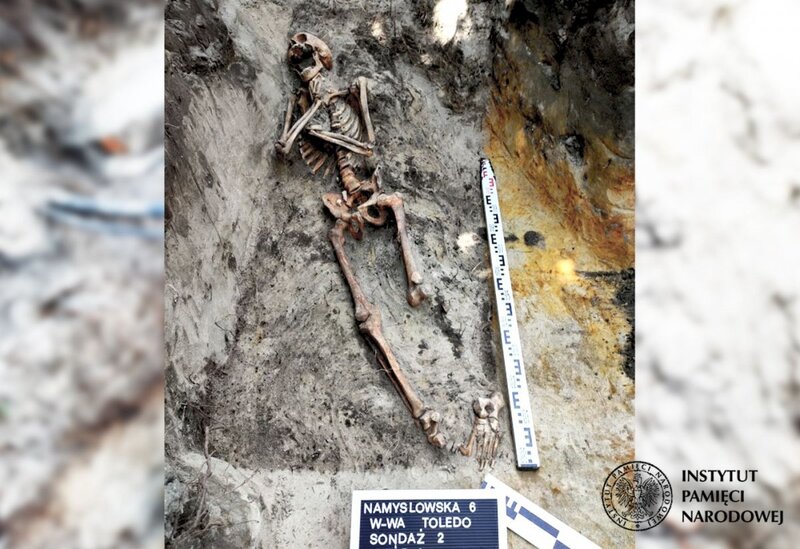 After the remains of three people had been found on the premises of the former Warsaw III Prison (so-called Toledo) located at 6 Namysłowska Street in Warsaw, the IPN’s Office of Search and Identification proceeded to meet all legal requirements that would allow expanding the scope of works carried out at this location.
The analysis of archival documents, witness accounts (including testimonies of former prisoners), aerial photographs, land survey data and maps carried out by the IPN’s Office of  Search and Identification indicated the existence of a small area which could have been used as a place of execution and burial of prisoners in the years of Stalinist terror.
Within weeks of the Office of Search and Identification discovery, the estate's administration started paving of the parking lot in the area in question. From the very beginning, the IPN’s archaeologists participated in these works, with the investor's consent. At the same time, the Office took formal steps to obtain all permits necessary to conduct a full archaeological search there.
In early June 2020, several fragments of human bones were revealed; however, no burial pits were found. The prosecutor of the Chief Commission for the Prosecution of Crimes against the Polish Nation in Warsaw was notified about this fact.
Then, a mass grave with the remains of three people was revealed on the site. The lack of any traces of coffins, as well as the arrangement of the bones, may indicate that we may be dealing with prison burials dating back to the communist period. Full archaeological search in the area of the former "Toledo" Prison was conducted by the IPN’s Office of Search and Identification in the following weeks, and led to unearthing the remains of two more people.
The Warsaw III (Toledo) Prison  was a Security Service and the NKVD prison, functioning from the moment  Soviet troops entered  Warsaw's Praga district  (1944). It was intended for soldiers of the Home Army, the National Armed Forces and other political prisoners whom the Stalinist regime considered particularly dangerous for the new authorities. The prison, considered by the prisoners as the most harsh,  existed until 1956. Executions on many members of the pro-independence underground were carried out within its walls.