The first transport to Auschwitz – commemorations in Cracow, Tarnów and Oświęcim

The President of the Institute of National Remembrance Jarosław Szarek, Ph.D. and the Director of the Cracow branch of the IPN Filip Musiał, D.Sc. laid flowers at the obelisk at the Tarnów railway station. It is the place from where the first mass transport of Poles was sent to the German extermination camp. Flowers were also laid at the Death Wall in KL Auschwitz. 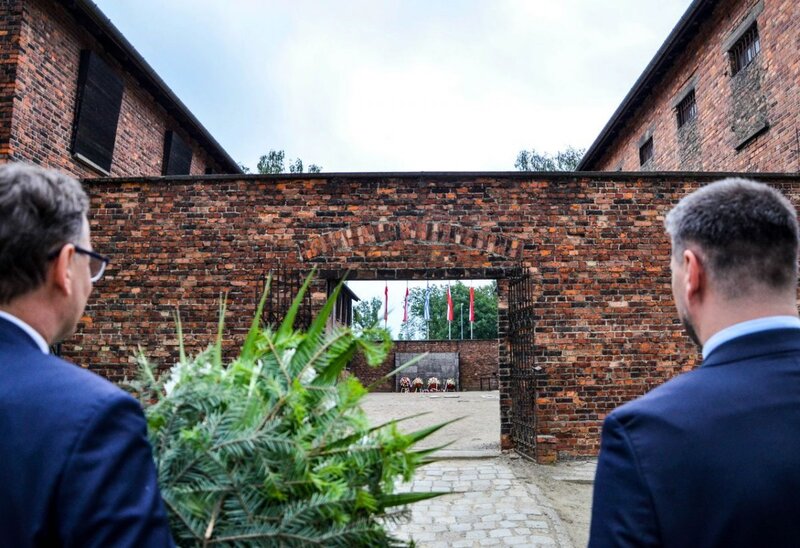 728 Poles including members of the underground and those arrested in round-ups were sent to the KL Auschwitz German extermination camp on 14 June 1940. By the resolution of the Sejm, we celebrate 14 June  as the National Remembrance Day for Victims of the German Nazi Concentration and Extermination Camps.

On 14 June 2020 in Tarnów, near the railway ramp, from where the first transport to Auschwitz set off, the President of the IPN Jarosław Szarek, Ph.D. with the director of the Cracow Branch of the Institute of National Remembrance Filip Musiał, D.Sc. laid a white and red wreath. In talks with journalists, the President of the IPN emphasized that Auschwitz is a symbol of German genocide and cruelty, which began with the destruction of the Polish elite. “This plan failed. Poland is an independent state, and our duty is to remember about the victims of German repression,” he said.

The IPN representatives also laid flowers in Oświęcim, at a memorial plaque on the wall of the building of the Capt. Witold Pilecki Malopolska State University and at the monument dedicated to the Captain at the same university. The Germans brought the first transport of prisoners from Tarnów to the building currently occupied by the university. The President of the IPN also laid flowers at the Death Wall in the former KL Auschwitz. On 14 June 2020, the Director of the Cracow Branch laid flowers at the obelisk at the Więźniów Obozów Zagłady Square in Cracow.
Niemiecka fabryka śmierci

German death factory
The date of 14 June 1940 is considered to be the beginning of the functioning of the German extermination camp in Oświęcim. The first transport of prisoners (they were given camp numbers from 31 to 758), consisted of a large group of people who had attempted to get through to France where the Polish Armed Forces were formed. Some prisoners were arrested during Operation AB, i.e. the Extraordinary
Operation of Pacification carried out by the Germans in the General Government in 1940. The first prisoners also included those detained during round-ups, activists of political, underground and social organizations, government officials, scouts, high school graduates and other representatives of the Polish intelligentsia. On 14 June 1940, also a small group of Polish Jews was brought to Auschwitz.

During an appeal from the deputy commander of the SS-Hauptsturmführer Karl Fritzsch camp addressed the prisoners: " “You have not come to a sanatorium, but rather to a German concentration camp, from which the only way out is through the chimney. If anybody doesn’t like it, you can go throw yourself on the barbed wire right now. If there are any Jews in this transport, they have the right to live not longer than two weeks, priests a month, and the rest – three months.”
239 people from the first transport survived the hell of Auschwitz. Some were released after several months, others were there for over four years.