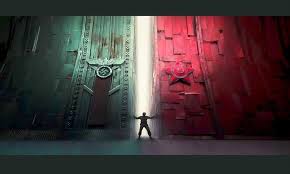 In the wake of the German and Soviet aggression, Poland’s territory was divided between two occupiers, and its citizens were subjected to the terror of two totalitarian regimes: the Third Reich and the USSR. The Polish state authorities had to seek shelter on the territory of their allies, so as to continue their struggle for national independence, now in exile.

In 1941, the two aggressors started to fight against each other. The totalitarian Soviet Union, suffering defeats, joined the Allies. The entire Poland found itself under German occupation. As long as Germany had the initiative on the front, stretched far east of Poland's borders, Stalin was forced to respect the restored relations with the Polish Government-in-exile. Moreover, the Atlantic Charter also guaranteed Poland’s reconstruction in its pre-war borders.

Following the Battle of Stalingrad, there was a breakthrough on the eastern front, the totalitarian Soviet Union – as a member of the anti-German coalition – began its victorious march to the West. In 1943, the USSR unilaterally broke off diplomatic relations with Poland. After the Red Army had invaded the territory of the Second Polish Republic in 1944–1945, the Soviets – acting against the officially proclaimed rules of the United Nations – annexed Poland’s eastern territories and enslaved the rest of the Polish lands. Not only did the Red Army and the NKVD destroy the then administration of German occupation on the Polish lands but they also dismantled belonging to the Allies structures of the Polish Underground State – rebuilt underground and ready for disclosure.

In the annexed Poland, the Soviet Union established permanent Red Army garrisons, and did not allow the legitimate Polish state authorities to return to the homeland. Instead, a puppet communist government, which began to build the totalitarian system under Soviet protection, was established.

In 1939, the Polish Armed Forces defended their homeland. During the war, they fought for the freedom of Norway, France and Great Britain. As part of the Allied forces, they liberated Italy, France, Belgium and the Netherlands from German occupation, and captured North-West Germany.

The partisan warfare and insurgent activities of the Polish Armed Forces were aimed at liberating subsequent areas of Poland from German occupation. Despite the willingness to continue the fight against Germany, these forces were then destroyed by the Soviet Union: disarmed, detained, deported to the gulags, murdered in mass executions. At that time, the Poles, conscripted by the Soviets into units subordinate to the Red Army, fought with Germany on the eastern front having no influence on their fate.

Though Poland gained the destroyed and looted northern and western territories taken away from defeated Germany, it was 18% smaller at the end of the war in comparison with 1939, deprived of nearly half of the pre-war territory, which had been captured by the USSR.

As a result of the Soviet policy and the concessions of the Allies towards Stalin at the end of the war in Europe in May 1945, Poland was not independent, and did not regain all its territory. Its citizens were subjected to the totalitarian enslavement under the rule of the puppet communist government fully dependent on Moscow.

Poland was the only of the Allies whose fate was sealed this way.

Poland could enjoy its independence and the freedom of its citizens only after the fall of the communist regime dependent on the USSR – at the beginning of the 1990s – 50 years after the German and Soviet aggression in 1939.