Katyń: the school of lying of the Polish Worker`s Party

On April 11th 1943 the Germans began the propaganda campaign regarding the discovery of mass graves of the Polish officers in Katyń, murdered by the NKVD in 1940. Street megaphones in the General Government for occupied Poland and propaganda press were announcing the victims’ names and information of the documents and personal items found on them. 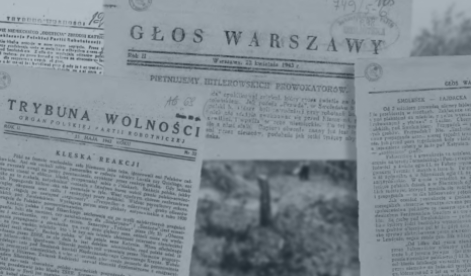 “There are situations, when […] even the dirtiest of lies one needs to cover in the cloth of truth. That’s how it was with Katyń.”

It’s worth noting, that the Third Reich was no better than the Soviet Union, since Hitler attacked Poland along with Stalin in September of 1939, systematically murdered the representatives of the Polish elite and was responsible for the Holocaust. Nonetheless, after the two former allies began fighting among themselves in June of 1941, the reveal of the true face of the USSR was a dangerous blow for the Soviets’ reputation as the member of the anti-Hitler coalition.

The Soviets denied all accusations. According to the official statement published in the Moscow newspaper, ironically entitled “The Truth”, Polish officers were sent to work on roads near Smoleńsk in 1941 and were murdered by the Germans upon reaching their destination.

The Polish government-in-exile led by Gen. Władysław Sikorski turned to the International Red Cross with a request of starting an investigation to determine who was the perpetrator of the horrific crime. The Soviets used that fact to break all diplomatic relations with the Polish authorities, absurdly accusing them of “collaborating with the Germans”. Naturally, the entire matter was just an excuse for Stalin, who after the victorious battle of Stalingrad planned future conquests. Getting rid of the ally obligations towards the Polish government enabled him to freely enact policies concerning Poland by a method of done facts: the forming of the Polish military completely subordinate to the USSR – a division and then the entire army of Gen. Zygmunt Berling – and later creating the Polish Committee of National Liberation, which in turn paved the way for the Polish Communists to get into power.

“Death was brought to them by a Moscow Asian”

Following the first announcements of the German propaganda apparatus, steered by Joseph Goebbels, there was no doubt among the ranks of the Underground State that the information were generally true. It fit the modus operandi of the Communist system and the fact that there was no contact with thousands of the Polish POWs seized by the Red Army in 1939, after only several months from their capture. There were also unsuccessful searches for the missing officers by the Polish authorities, following the signing of the Polish-Soviet agreement on July 30th 1941 (Sikorski-Mayski agreement). Constantly pressured Soviet officials kept avoiding giving straight answers or simply turned to lies. In a conversation with Gen. Sikorski and Gen. Anders, Stalin was to say that the lost officers could have ran away to… Manchuria.

The Polish press published in London was under pressure from the English, who, in the name of good relations with Moscow, didn’t allow it to report on Katyń freely. Polish newspapers were released with white spaces where the articles took down by the English censure were. The opposite was in the occupied country. There, it was openly written that the victims described by the Germans were the POWs from Kozielsk, murdered by the NKVD.

The official body of the Home Army, the “Informative Bulletin”, commented on April 20th 1943:

“[…] what we could only suspect on the basis of rumours or the voice of futile efforts of the Polish embassy in Kuybyshev, which couldn’t find 8500 of our officers, became a cruel reality. We now know, what death, offending all divine and human laws, did the Moscow Asian bring to them, away from their Homeland.”

While writing about the Katyń murder, at the same time the press reminded of the German crimes committed on Poles, as well as the ongoing Holocaust. Comparing Nazism and Communism as equal, there were more and more voices of concern about the fate of Poland, when the only formally allied Red Army troops would again show up at its lands.

“The work of the Nazi beast”

Only the Communists from the Polish Workers’ Party (or PPR) had a completely opposite stance on the Katyń crime. It was the effect of the collaborative nature of the party, which was strictly subordinate to the USSR and following Moscow’s orders.

At first, the PPR’s press was disoriented, not knowing what to write to defend the “fatherland of the worldwide proletariat” against the very serious accusation of the Katyń crime. In the middle of April 1943, the Communist “Voice of Warsaw” argued in an article ironically entitled “Smoleńsk – the wretched German provocation”, that the graves found in Katyń weren’t of Poles, but probably of Soviet citizens murdered by the Germans, and that the whole case was nothing short of a Nazi mystification. However, almost at the same time, Moscow radioed the PPR ordering it to lead the propaganda in the spirit of the official stance of the USSR, meaning to write that it were indeed Polish officers buried in Katyń, but shot by the Germans in Autumn of 1941. In the next issue of the “Voice of Warsaw” from April 23rd 1943, the Communists gave this version of the events, stating that the lesson which Poles should take from the Katyń massacre is to tighten their relations with the USSR.

Also the central organ of the PPR, the “Freedom Tribune”, unquestionably pointed to the perpetrators of the crime on May 1st 1943:

“[…] the massacred bodies of the Polish officers near Smoleńsk are the work of the Nazi beast! […] By using the proven criminal way to shout <<catch the thief>>, the German propaganda wants to turn the sacred wrath of every Pole away from the true perpetrators, to point it towards the Soviet Union”.

The Polish Workers’ Party not only conducted its own actions in this matter but also aided Moscow in its propaganda by sending it useful information for radio broadcasts and press releases. In example, in the telegram from May 13th 1943, the PPR’s secretary Pinkus Finder “Paweł”, wrote: “[…] in regards to Capt. Bem, who is on the list of the shot officers, we know he was sent to Auschwitz by the Germans in 1940”. Of course, these types of information, which were to confirm that the crime was committed by the Germans, were untrue.

To read the full article, please go to: https://przystanekhistoria.pl/pa2/tematy/english-content/53026,Katyn-the-school-of-lying-of-the-Polish-Workers-Party.html