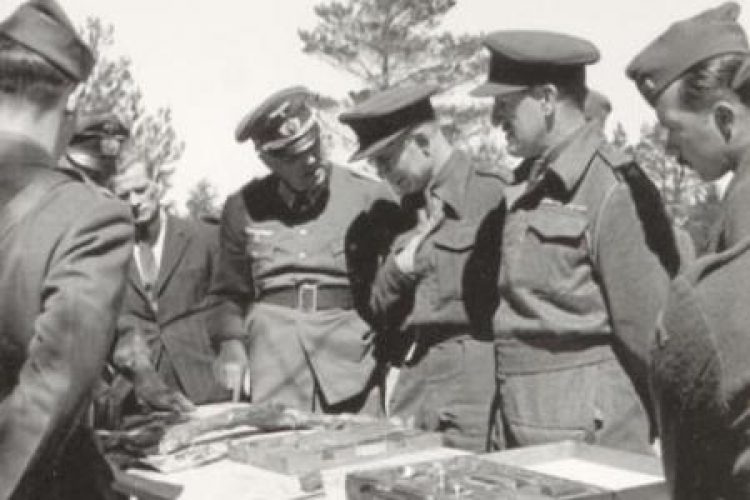 The earlier than planned inauguration of the Committee’s work was decided in order not to miss the opportunity to hear the testimony of Lt. Col. Donald Boyle Stewart, who in two weeks was to fly to Tokyo, from where it was close to the Korean war front. The hearing was possible due to the consent of both the US Secretary of Defense and the US Army Secretary. His interrogation was the only one in 1951.

The events of the Second World War decided that Stewart stood before the Committee. In mid-February 1943 he was captured by Germany and hit Oflag IX A / Z in Rotenburg. In May 1943 he was transported to the place of discovery of the corpses of officers of the Polish Army near Katyn. A 28-year-old officer was in the group of prisoners which included American Lt. Col. John Van Vliet jr. and British officers: Lt. Col. Frank Stevenson (from South Africa) and Capt. Stanley Gilder (physician).

In the Katyn forest, on 13 May 1943, he saw the discovered death pits full of victims in Polish uniforms, as well as corpses already examined, and personal effects found on them. He also witnessed the examination of corpses selected from the layer of bodies by Anglo-Saxon prisoners. Stewart, like other Anglo-Saxons, aptly found that the crimes had been committed by the Soviets. In 1951 he recalled:

"Many corpses were dressed in coats in good condition, Polish coats. [...] I was a prisoner of war myself and my clothes were worn out. Each of us individually noticed this, and based on the examination of these uniforms we came to the conclusion that these officers could not have been in captivity for a long time when they died. [...] The shoes were not worn at all, very slight signs of wear. If these shoes had been worn longer, they would have borne signs of more wear than was actually the case. "

This observation led to the conclusion that the killed could not have been imprisoned from September 1939 until the second half of 1941, when, according to the Soviet authorities, they were murdered by the Germans, and had been killed earlier (in 1940) by the Soviets. After a visit to Katyn, Stewart was imprisoned by the Germans in Oflag 64 in Szubin near Bydgoszcz. As an officer who knew the intelligence codes of the US Army, in his letters from the POW camp he provided hidden information that the Soviets were responsible for the Katyn massacre. In the winter of 1945, due to the approach of the eastern front to the oflag, Stewart was evacuated west with other prisoners, so he did not fall into Soviet hands. After the end of the war, he remained in active service until 1968 and, according to the order, he did not share information about his experience of 1943 with anyone else. The ban was removed in 1970, when he gave his first interview on the subject.

The prior consent of his superiors in 1951 concerned only the assistance to R. Madden's Committee. When its session ended and Stewart left the Congress building, they army representatives surrounded him and escorted him to the station from which he left Washington. This was done on purpose; so that the journalists could not approach him.

Within three hours, Donald Boyle Stewart managed to give a valuable testimony. He also presented the Committee with seven photographs from his stay in the Katyn forest. As he told the congressmen, they had been made and handed over to him by the Germans, on the grounds that Americans like souvenirs. The Committee included the photos in the report as the first physical evidence of the investigation. The IPN received their scans from the American National Archives (NARA) while working on the Polish edition of the findings of the congressional investigation. We present one of the photographs to you.